Shortcuts/Create File - How to set file to variable?

Do you know how I can set the file to a variable for the “Create File” action in Shortcuts? I don’t seem to be able to set any variable (tried long pressing Choose) and only get the file browser when I click on choose. Long pressing “Choose” doesn’t trigger any selection menu like it does for other inputs.

Some example shortcuts seem to have managed to set it to a variable: 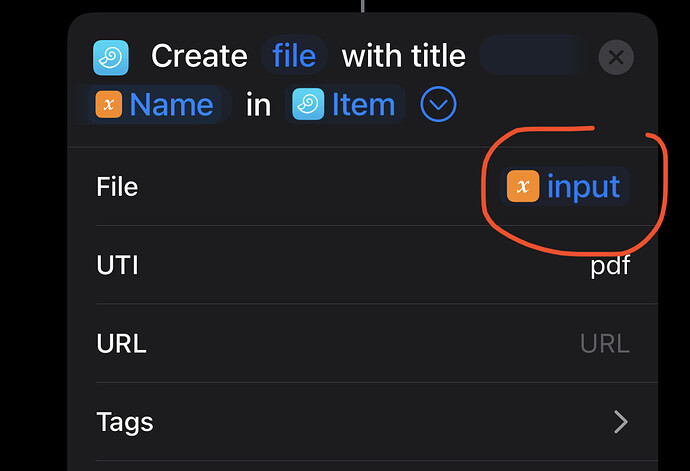 How to specify the group from a variable when creating a file with iOS shortcuts
BLUEFROG February 6, 2022, 5:11pm #2

Development would have to comment further but at this time that functionality is not possible.

@BLUEFROG thanks for the quick feedback! If it isn’t possible, how did others manage it (unfortunately cannot provide link here in the forum)?

In existing example Shortcuts others reference to a variable (see screenshot) and I can also change the variable - just if I delete it and want to reset it, I run into the same issue. 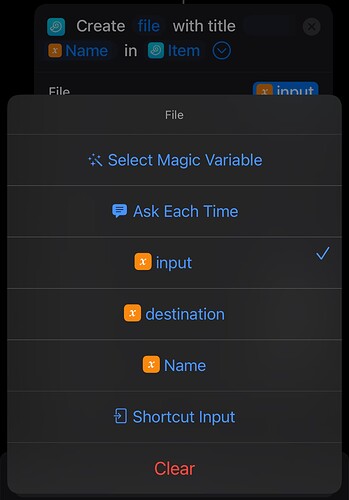 As I mentioned, Development would have to weigh in on this as I don’t know if it’s something Apple broke in the recent versions of iOS or Shortcuts, both of which have seen many changes.

I had a few shortcuts in iOS that used a subroutine to ask for a relative or specific day (today, tomorrow, enter a date) then open the existing journal entry for that date. They’ve been problematic in that it worked most times but other times would only give a long list of files to choose from. Could never track down the nature of the error.
After the most recent iOS update the subroutine broke and errored out every time. Not a helpful error message either.
I deleted the DevonThink elements of each shortcut
(search for, and open items) and re-entered them.
Now they work better than before.
Shortcuts iz weerd!

@SlickSlack Shortcuts is indeed strange and unfortunately unreliable and slow - I am actually considering switching to Swift for my core automations and already ported some but unfortunately iOS is extremely strict as far as inter-app communication (really miss what you can do on MacOS with respect to automation).

I am actually considering switching to Swift for my core automations

Wow, that’s quite a shift. Maybe Scriptable would be a simpler alternative? Although development there has slowed down quite a bit in the past. Shortcuts is, at least now, nothing more than an inflated marketing blurb that simply does not live up to the expectations Apple has created.

Scriptable has unfortunately some of the same issues + you need to always hope that the iOS API is exposed (which isn’t the case for a significant portion).

Swift has the benefit that you have full access to the core libraries (eg I am experimenting with the ML/NLP routines for automated PDF naming).

Right. It’s a lot easier on the Mac, but iOS is still very limited regarding automation and scripting.