Smart Rule for files synced from DTTG3 not triggering

I’m trying to create a Smart Rule that will OCR images that are synced from DTTG3, but it doesn’t appear to be triggering. The rule sees the images and will properly OCR them when I manually run the rule, but the sync is not triggering it and I can’t figure out why. Here is the rule config: 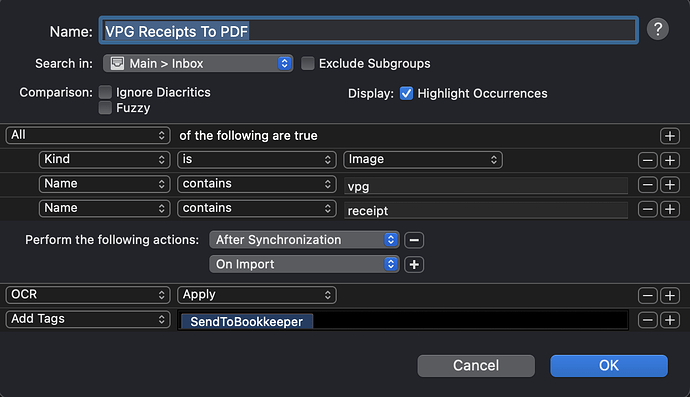 The workflow is using a Siri shortcut on the phone, I take a pic of a receipt and add the vendor, it gets renamed, image is created in DTTG3 in the “Main” DB’s Inbox which then syncs to DT3 via iCloud CloudKit. The intent is for DT3 to then execute this rule after that image syncs over, but not working.

What am I missing here?

Do you have other smart rules targeting the Main > Inbox?

I do. I have another one that runs hourly to email the files tagged as “SendToBookkeeper” to my bookkeeper. I originally tried to combine the two rules, but had the same issue of the rule not running so split them into two using the tags. 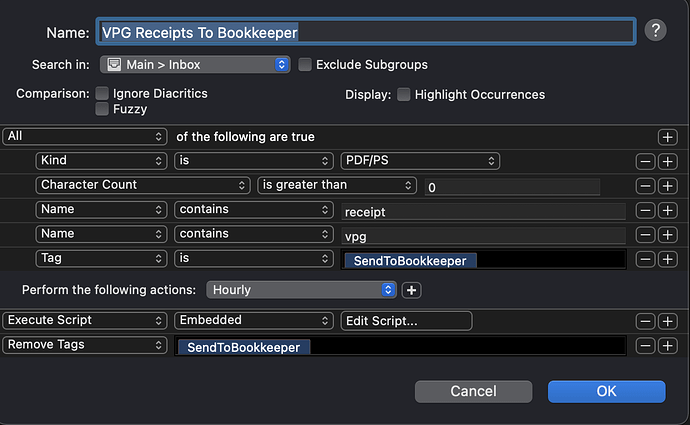 but it doesn’t appear to be triggering. The rule sees the images and will properly OCR them when I manually run the rule

Does the rule work if it’s e.g. executed hourly?

Yes, it does. Both rules execute as expected if set to hourly. Leads me to believe there’s an issue with the triggers on the initial OCR rule, but not sure if it’s just a misconfiguration or a bug.

As the order matters - which of the two rules is the first one in the list of smart rules in the sidebar?

The OCR rule. They’re in the expected order of running on the sidebar.

I just tried this using the latest internal build and it’s working as expected, meaning that it’s either fixed or that there’s still a conflict with another smart rule in your case. In addition, which version of macOS and of DEVONthink do you use?

I also did another test and confirmed that with the rule set to run hourly as you suggested above, the entire process works from start to finish with a fresh new receipt image capture on the phone.