I was wondering whether there was a limit on the number of smart rules. The reason for asking is that I am amassing a deal of information on roughly a 100 year period. In order to make more sense out of it I was thinking of creating a smart rule for each year so that I can better see the events and connections. Additionally, I would like to add specific people (reeve, sheriff, castellan and so on) and create further rules which would make finding references to them a breeze.
This would involve close to something like 100 rules. Would that cause problems in any way?
Of course if there’s a simpler and better way of doing this, I’m all ears!
Many thanks.

There isn’t a limit I’m aware of, but don’t create smart rules if smart groups will suffice. They are not synonymous.

It’s also undefined what criteria you’re intending to use for the smart group.

Obviously i need to read more deeply in the manual. The idea of smart groups did cross my mind immediately after posting, but I was (and remain) unsure of the differences and uses.
I must ponder further

Thanks for the idea…

There is info on Smart Rules in Automation > Smart Rules, but remember they have different purposes. I don’t suggest creating smart rules if smart groups are needed.

Yup! Thanks for the heads up on the documentation. Looks like smart groups is the way I need to go to get a handle on the different info I’m gathering. I think I recall reading somewhere that I can’t nest smart groups, but hey! It’s a start…

No smart groups can’t be nested, nor can they refer to one another, i.e., you can’t target another smart group.

As ever, a fount of information, Mr Bluefrog. There’s just so many ways of organizing and viewing the data that it really comes down to what works for me and my particular needs. I’m just so glad that i didn’t have to write the documentation!
Onwards and upwards!

There’s just so many ways of organizing and viewing the data that it really comes down to what works for me and my particular needs.

Indeed! As I noted in the documentation… 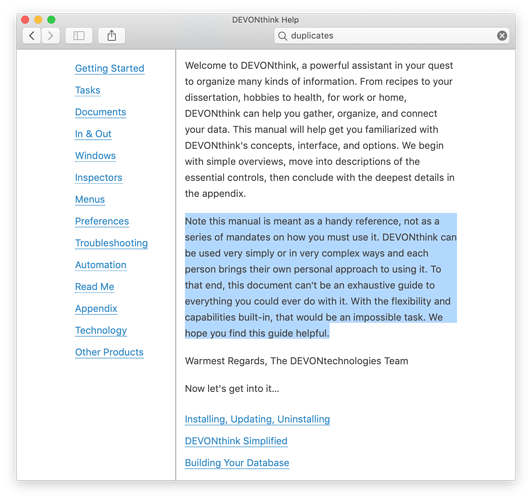