"Smart Rules" scripts in Finder not same as in Menu

I’m trying to use a smart rule to export a document to the finder. Inserting the “Move to external folder” external script as below doesn’t seem to do anything; I’d expect to get prompted for a destination at a minimum.

Screen Shot 2019-09-24 at 11.01.15 .png1252×594 324 KB
Further checking shows that the script listing in ~/Library/Application Scripts/… is not the same as the menu; although most are identifiable as corresponding, some are missing from one or the other.
Consolidate and Deconsolidate are missing from the menu, Move into Database and Move to External Folder are missing from the finder folder.
Edit: if it is pertinent, I started with DT3b6, moved to b7 and then 3.0 Release. 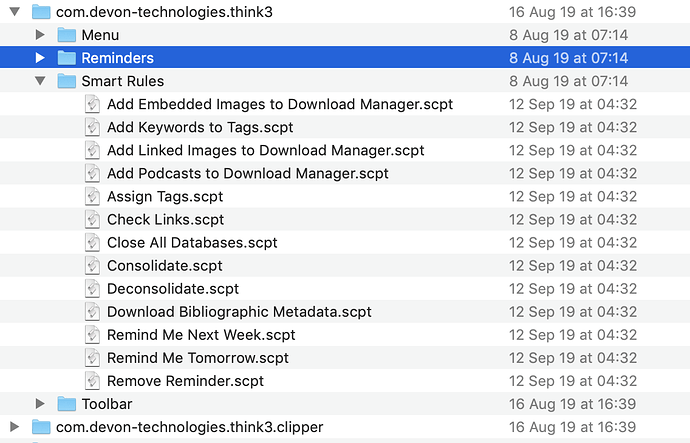 Is the “Move to External Folder” script available somewhere? Or does anyone have an example of how to script this?

In the user interface localized names are displayed, not the actual filenames. E.g. the Consolidate/Deconsolidate scripts are the “Move Into Database”/“Move To External Folder” items. 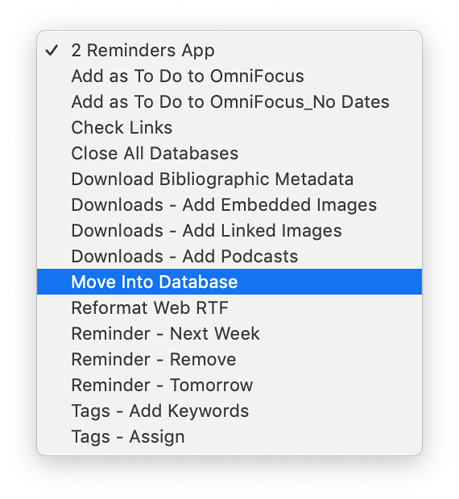 PS: The scripts do not prompt for a location. They merely move the file to the externally indexed location.

Move to External Folder: Moves imported files out to the Finder when they’re located in an indexed group.

Doesn’t that conflict with this?

I can do all the above except for step 3. The following as an embedded script compiles but doesn’t seem to do anything. Ideas? Thanks for your patience.

You’re missing a critical element of the command…

Yes. Only after staring at it for a few minutes! Should be

Thank you! The support you folks provide is nothing short of awesome.

You got it! And thanks!

Doesn’t that conflict with this?

No, this is fully supported.