If you don’t find the answer, you might search the internet for .aiff files whose names might signify the sound you want. Say, search for “drip.aiff”. Once found, you put those files in ~/Library/Sounds. (See this for more information about custom sounds.)

It’s buried pretty deeply… If you right-click the DEVONthink application and choose “Show Package Contents”, go down this rabbit hole…

Thanks Bluefrog.
I get as far as “SorterPlugin.bundle” and no further. 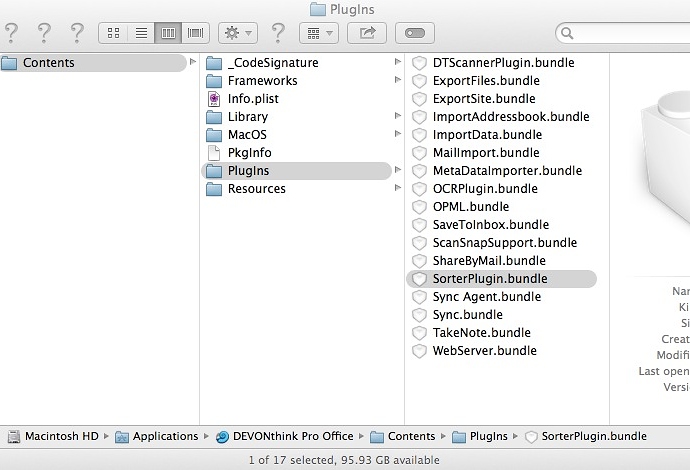 Clicking on Contents opens up Terminal.

Go into the MacOS folder. Not the Plugins folder. (Jim’s reply above has the whole path.)

Go into the MacOS folder. Not the Plugins folder. (Jim’s reply above has the whole path.)

I must be particularly thick today but still can not get it! This is what I get from Jim’s 1st. instruction to right click on the Applivation, (which DTP Office): 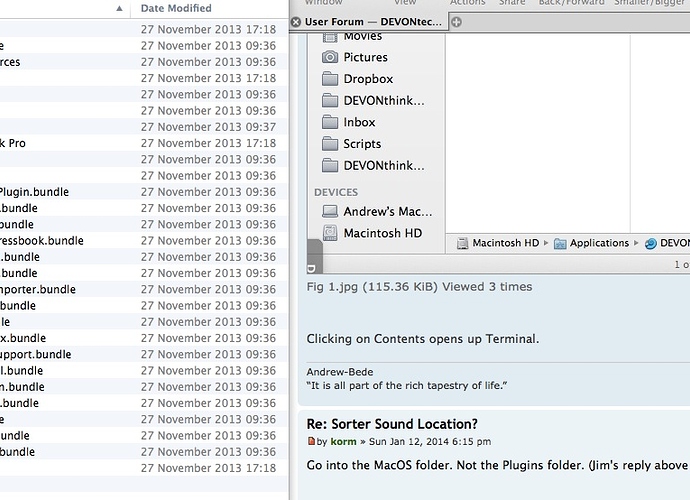 If I then go to either the MacOS Folder and proceed I get Termonal. Must be going wrong somewhere

This screen shot was taken from Path Finder (full path at the top).

OK this is very frustrating. Here is an image of where I am compared with Greg’s. See especially his path at the top image and mine on the bottom. I come to a dead end with SorterPlugin.bundle. Sorry but that is how it is I I can not seem to get round it! Help!!! 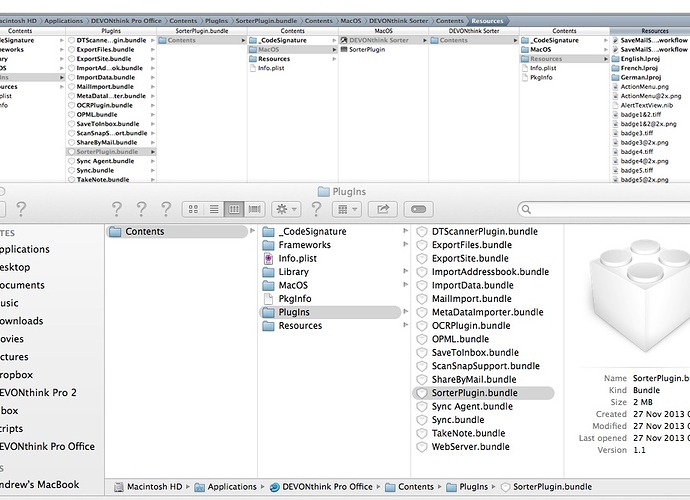 Using the Finder, once you get to the SorterPlugin.bundle you need to again right-click and select ‘Show Package Contents’.

Here’s an another approach:

If you have installed DEVONthink on your computer “for all users”, copy the path below. Go to Finder. Click Go > Go to Folder… and paste the path in the dialog window. Press Return and that folder will open.

If you have installed DEVONthink for just the user that you used to log in with, then use this path in the Go command:

In either case, if you have installed DEVONthink into a subfolder of Applications, be sure to add the name of that folder. For example, this is my path:

Do not use my path (the last example) unless of course that’s also the locale for your copy of DEVONthink.

Thank you Greg & Korm for your last posts, at last I have got it