In the beta version, though I’ve checked the Preferences tab to keep the dock on the side as a tab, whenever I close DT, the side sorter )“Dock Tab”) is not visible. I also tried changing it to a Menu Extra but again, when I close the program, it too isn’t visible.

Thanks for your suggestions.

It disappears because it’s not a standalone application. It is part of DEVONthink 3 and requires it to be open to appear.

Ok, I’m a bit confused. In the previous version, the inbox/sorter tab would remain visible even after I’d close the program. Thus, whenever I wanted to add a file or other item, I’d open the tab and move the item to the appropriate database. Then, when I opened DTPO, the item would be moved into the appropriate DB.

So now, when DT Pro 3 is closed, there’ll no longer be the option of having the tab on the side of my screen?

Correct. It functioned as a standalone application. The new Sorter is an integrated part of DEVONthink 3.

A bit of a bummer. However, since the Sorter tab option is no longer available, what has replaced it? That is, does DT 3 have to remain open at all times?

I miss that feature too, it was readily available when I needed it even if the app wasn’t running, I always had it on.

Wonder if we are missing a featured replacement.

Yes, DEVONthink 3 has to be open to access the Sorter.

It seems to me as a disadvantage, even DT 3 must be the foremost App running to use the sorter. So what is the need for the sorter? one can put the file directly to the database or group where they belongs to.

even DT 3 must be the foremost App running to use the sorter.

DEVONthink 3 doesn’t have to be the frontmost app. It just has to not be hidden. Here I am clearly not in DEVONthink but the Sorter is available. 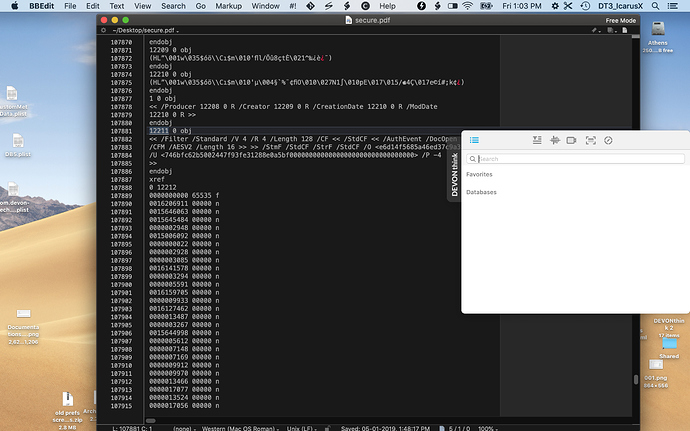 Thank you for the information, now it seems not so useless to me.

now it seems not so useless to me.

Uh, yeah… we try to not make useless things.

Congratulation!
Now with the 3.0 3beta the sorter is permanently on screen available, even when DT3 is in hidden state. I guess this is for many users a wanted feature.

“Now with the 3.0 3beta the sorter is permanently on screen available, even when DT3 is in hidden state”
But this was never a problem; it was/is that the sorter is NOT available when the application is closed (not hidden)–unless the latest beta restores this.

But this was never a problem

This was indeed “a problem” for many users who reported it.

the sorter is NOT available when the application is closed (not hidden)–unless the latest beta restores this.

No, this is not “restored”. The Sorter is not a standalone application, so it won’t run when DEVONthink isn’t running.

Well it seems clear that many many people do not have DT open all the time and miss a standalone sorter.

Uh, yeah… we try to not make useless things

You’ve come damn near close: a widget for entering data into an app that’s already open.

As I said elsewhere one solution for now is to write a service with Automator (which can be evoked with a keystroke combination) to move selected items into the DT Finder Inbox thing.

the ability to use the sorter when DT was closed was very handy. I don’t always have DT open but I am always in need of dumping files into DT so it is not a useless thing. It was one of the “things” I found extremely useful and a time safer. Please bring it back, The last thing I want is one more keystroke in order to move the file. The old sorter was simple, easy to use and available anytime.

On another note in regard to the sorter you use to be able to position the sorter anywhere around the screen. Now you are limited to either side and only in 3 positions on either side. Please look into allowing the sorter to be positioned where it best suits the user

I agree that only being able to use the sorter while DT is open is right next to useless. I really hope that with the future updates that they bring that function back. Having it as a standalone sorter made it so much easier to save documents as needed. I am even at the point that I may just stay with DT Pro 2

The technical reasons and advantages for the Sorter being deeply integrated make this separation infeasible.

Also, DEVONthink 2.x is now in maintenance mode and will lose OCR functionality in macOS 10.15 Catalina.

I realize that the integration in the “new” Sorter has been redefined (deepened) moving forward.

However, many of us who have used DTP for years have grown accustomed to specialized workflows that don’t require DTP to be open at all times. In this regard, having a “dropbox” type feature where we could just drag and drop documents, and sort them out later is absolutely invaluable.

I don’t want to keep DTP (Okay, DT3 now) open at all times. Please bring back some sort of dropbox where those of us who have supported you for years can maintain our everyday workflows.

Unfortunately, I just today learned (the hard way) that the old Sorter (that had always been right where I positioned it, and was still running after upgrading to DT3) was not actually depositing my dragged documents into the Inbox where I expected them to be. I’m a little off-put by this inconsistency in interface, especially since I was not clearly informed of the design change when I upgraded.

Additionally, I miss the larger quadrant of boxes layout of the old Sorter…now when I drag & drop documents, I have to drill down to my “standard” Inbox location, which takes more time and is less efficient than the old Sorter…

Please pass this feedback on to the developers

I have to drill down to my “standard” Inbox location

You can add the Inbox(es) to your Favorites and have them accessible to drop directly into.

The request is noted, with no promises, of course.