I think I really broke it this time

I have a smart rule that tidies my desktop. Works great. Take all desktop docs, move them to this group in desktop.

I forgot that finder aliases, and everything within them, are indexed in DT…

Setting up a new machine I made aliases of both machines Applications, ~/Library/Prefs, ~/Library/App Support, and user home folders and put them on the desktop. (So I could quickly drag and drop from these folders as needed.

So devonthink has now tried to move everything in these folders into this Tidy Desktop group, a dozen times…

The DT database still opens, but everything I’ve tried to do with these groups causes DT to beach ball and I force quit after 10 mins. I just want to delete/stop indexing them.

I’ve disabled the smart rule to stop the bleeding. What would you recommend to do next?

EDIT: I see in other threads a recommendation to Trash “Only in Database”. So that’s what I’m trying, but it beachballs immediately upon offering the pop-up. And I can’t make the popup go away by clicking, I’m not sure it’s registering my “Only in Database” click

I would trash DEVONthink’s preferences so it’ll launch with no open databases.
What else is in this database?

After force quit it launches with no open databases.

This database is my “Mac Archive” database. I’m guessing ~50GB of old docs in indexed folders, not synced. I say guessing because I had to force quit again, the beachballing was effecting other apps.

I can open the database and see this without beachballing. It even verifies with just ~10 errors (missing docs)

It looks like only ~1GB of docs were actually duplicated. 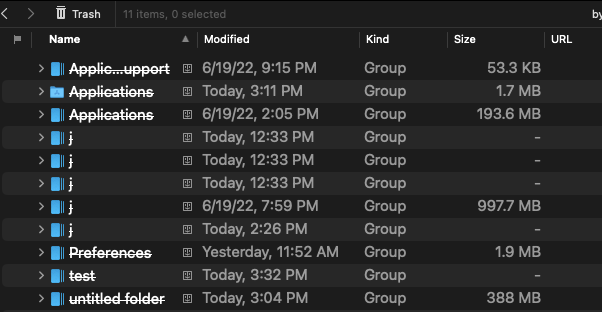 Just can’t empty the trash without what seems like permanent beachball.

A system reboot (and kernal panic) seems to have resolved it, I was able to empty trash.

Is there a way to disable or change the functioning of aliases? This isn’t the first time I’ve accidentally indexed much more than intended due to aliases. I think of them as “pointers” to other docs, but DT treats them more like the document itself.

Is there a way to disable or change the functioning of aliases?

No, this is automatically handled.

I think of them as “pointers” to other docs, but DT treats them more like the document itself.

They are still pointers to other docs but DEVONthink will resolve the aliases, including aliases to folders.