i know i am right about no facts in evidence. all this chat is pure speculation. i know nothing of the future. making predictions, especially about the future, is fraught with risk.

I am unsubscribing from all my subscriptions, starting with Creative Cloud and Office. And exclusively because they no longer allow me to use even old versions on my computers “obsolete” for Apple. I am used to using machines as long as possible. I’m still using an iMac G5 and two Core Intel 2 Duo (Tiger and El Capitan). I even recalled a G3 with classic a few months ago.
If they don’t allow me to buy the software, they force me to go pirate or to constantly renew the hardware. In this case, you would only do it with a TOTAL renting: hardware and ALL software with open bar. Like Spotify. And if I pay at the price of gold, also diamond service: machines thrown away every year. As that is not feasible, neither for me nor for the manufacturers, I only plan to continue using software that I can buy with a final license. If I’m interested, I renew when I play. If not, I still use the version compatible with my hardware.
In fact, in DevonThink I have bought several licenses, because they have allowed me to update to the latest versions without forcing me to pay anything. And in the end I have been paying more licenses even than the really used ones. And I have upgraded to DT3 paying thinking that I would be able to use that version for a long time. Maybe not as much as the previous one, but if they go to subscription, I will have to evaluate very well if my machines will be compatible. And if it is worthwhile for me to continue using a software that at the first change, forces me to export all the work to another program without any other option. In fact, given these rumors, I have already licensed other options to start preparing for the possible abandonment of DevonThink.

DT have said (either in this thread or one of the several others that are endlessly speculating on how and whether and why) that DT for Mac will not be moving to subscription. The only question is over DevonThink to Go on IOS & iPadOS.

Will posters please stop fantasising about the imminent subscription apocalypse. As if we don’t have really important, life and death, issues to deal with right now, we seem to want to expend what energy we have left on tributes to Grouch Marx (see the link posted here (Subscription Licensing Model?) )

I wonder how many people there keep paying because they have the sunk cost of everything being in TextExpander already.

I don’t mind paying for upgrades and in fact I have! I’ve been using 1Password for many years now (maybe started with version 3 in 2011!) and with each major update, I opted to pay for the upgrade. Then we got to version 7 (or something like that) when 1Password started a subscription model, but thankfully also offered a standalone model. I opted for the standalone model.

I don’t mind shelling out some major bucks once in a while for an upgrade, but I cannot stand that subscription model because it never feels like you have control of your expenses and that you’re tithed to dolling out $ each month (or annually) just to keep your workflow going.

In general, many developers are moving or planning to go to the subscription model. And I understand that it has advantages for them and for a type of user. But my only interest was to state that there are also others, many in my opinion, others will say the opposite, that we see a problem in that option. And more if it is exclusively, as Adobe or Microsoft does. Another example: I just purchased a Capture One Pro license, a standard license, not a subscription that they also offer, and the reason is precisely to abandon Lightroom, the only Creative Cloud program that I use regularly and had no substitute yet. I have been acquiring Affinity Designer, Photo, Publisher, and other options to try several and finally use the one that interests me the most. Obviously, it is not the same, but for me and after having canceled Creative Cloud twice, that subscription does not make sense. I am thinking the same with Setapp, I have licensed several of their programs to abandon the subscription. I don’t mind paying, a reasonable price of course, but the subscriptions force me to keep updating at the pace set by them. For example, MacPilot in setapp already only offers an exclusive version for Big Sur. I have a compatible mac, but at the moment I work with Catalina and I will not change until I check the compatibility of all my software. This makes subscriptions not working for me. MacPilot has already offered me to buy a direct license, of the “obsolete” version for Catalina. Why am I going to keep paying for a subscription that I can’t take advantage of with my computers? And the second user, who requires 10.12 or higher, and I have two more computers but with 10.11? Not to mention, that when they update requirements, they stop supporting previous versions. Neither online help works, since they withdraw it. And who works with those versions?

I understand all that, and agree with some of your reasons for not wanting subscriptions.

But I repeat, the DT developers have said very clearly that DT for Mac will not be moving to subscription, and I think we have no reason to doubt their word on this.

Mac will not be moving to subscription

This might be pedantic, but I believe they said there are currently no plans; whilst I interpret that to mean nothing will change in the immediate future, it doesn’t mean it never will. Just saying for prosperity’s sake

I think that’s taken as read. The sense of many of the posts in this thread, though, is that DT are lying in ambush, waiting to pounce on us poor, unsuspecting users, with a ransomware version of DT for Mac which holds our years of data hostage to a perpetual subscription.

“Nice database you’ve got there, squire. Wouldn’t like anything to happen to it, would we?” 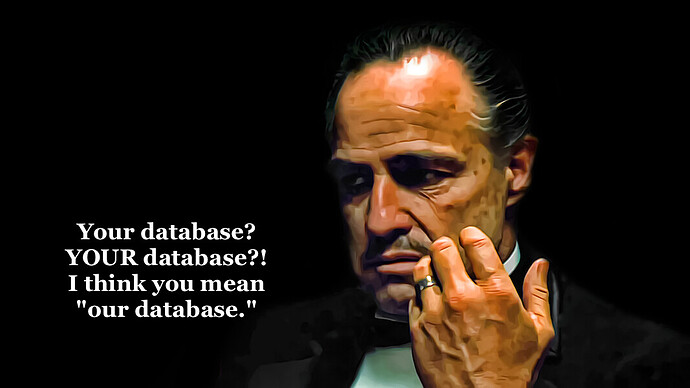 I honestly only wrote what I did after thinking about it 3 times and seeing your post quoted against you, DT and the world in 3 years time

I apologise if my post was unnecessary (that, of course, is not a proper apology, but it’s all the rage at the moment

DT are lying in ambush

Like you, I intensely believe that not to be the case. DT are Good

“Sorry/not sorry” is the standard form of apology right now, so you’re forgiven.

As to the future - I have prepared a special message in my time capsule for anyone who, in 3 years, does feel inclined to refer to my post censoriously. The message simply says “Whatever”.

I’ve never said they intend to ambush anyone. DT can do what he sees fit, it would be more. I only state my reasons against a possible change. And this medium seemed like a way to let them know that there are also users against it.
As a way for them to have opinions from their users, and then if they have to, make decisions. Or change them. Or continue on this path

If there are options, I am not opposed. I understand that many find them fine, a way to not pay so much at once and to be constantly updated. But others, this constant update is not possible. Or we do not want it, I can renew the computer more often, but is it really necessary to ask that they manufacture more, with the consumption of raw materials, and that they are not really useful to me?
I have also not really read if DT says that it does not change at the moment, or that there are no plans today, … we all know that those plans can change. And if they receive opinions from many, it is easier for them to think twice. Or not

Speaking of subscription based pricing, if a company goes that route, it’s a very VERY bad idea to do what Bloop did with AirMail 4. When that version came out, it came with like 2 weeks of the “subscription” features available. Most of those features were included in version 3.x of the app.

When Version 4 came out, they removed version 3 from the app store and if you had already paid the one-time price for those features, you had to now pay the subscription model pricing.

The kicker, though, is that version 4 is more buggy and the company is unresponsive to support requests. In fact, one of the “features” of the subscription was supposed to be 24/7 live support. Initially, there was a chat window in the app, where you could type in your issues, but nobody on their side was ever there (last active: 999 hours ago) and they never responded to email or ticket based requests that I sent in.

The “official” Reddit page is full of users asking for help and no response from anyone who works for the company.

Anyway, I don’t use DTTG enough to make it worth paying for a subscription, but I would definitely pay a moderate price for a full version bump, especially since I have current release generation hardware and software (iPhone SE 2020 version, iOS 15 or whatever). But if I still had my iPhone 6, I would hope that the now-current version of DTTG would still remain available. Pulling a version that has already been paid for should (IMO) only be done if the version no longer works with the OS that is supported. Like, when Apple stops supporting a level of hardware, it’s reasonable for a software company to stop supporting their software on it, too.