I’ve found a couple of references to this in the long history of this form this forum ([url]Quick open file or group] and [url]"Quick jump" to a group/entry]), but the discussions weren’t very robust, so I’m opening a new thread.

I’m lately finding myself wishing for a better way to quickly navigate mouselessly through my DEVONthink databases. It seems unnecessarily arduous to have to tab or, worse, click through a series of panes in order to go, say, three levels down to get to a group I know the name of.

The best workflow I’ve found is to search for the file/group and Reveal it. In keystrokes, that’s:

Many apps have adopted a “Quick Open” design pattern to shrink those clicks and taps. In OmniFocus, for instance, it’s:

I think using such a pattern would benefit DEVONthink navigation greatly.

Something similar might be adopted for Moving files/folders, too. Right now this seems to require either:

I could imagine a “move” menu being accessible with a text box instead of nested menus, where typing the name of the group gives you a narrowed view through which you can arrow-key, then hit “enter” to deposit the file.

Thoughts? Is this already available, and I’ve just missed it? Thanks!

It’s not yet available but definitely planned for future upgrades.

I would LOVE this feature. The Quick Open for Groups especially. I use it all the time in Ulysses, OmniFocus, Mail.app (with Mail Act-On). I would personally find the Quick Open for groups more useful than a Quick Open file (after all, if I want to find a specific file, I probably know what Group it is in–otherwise I’m using standard Find with ⇧⌘F).

I would LOVE this feature. The Quick Open for Groups especially. I use it all the time in Ulysses, OmniFocus, Mail.app (with Mail Act-On). I would personally find the Quick Open for groups more useful than a Quick Open file (after all, if I want to find a specific file, I probably know what Group it is in–otherwise I’m using standard Find with ⇧⌘F).

Just posted about this and then found this thread… greatly needed!

Is this still something this planned? The earliest request I could find on these forums was 2014! It’s still seems like a useful feature.

This is available in DEVONthink 3! See Go → To Group…, or cmd+o (for me, at least… I might have customized that) or Data → Move To…

For a group, but how about a document?

Ahh, no, I don’t think so. Although: do you have Keyboard Maestro? I have a way of doing autocomplete-search quick open with a macro, though it can be a bit ornery to maintain. (You have to either live-generate or maintain a cached list of the items you want to search. The former is not so bad if the number of items is small.)

Why not just add the document to your Favorites?

That presumes I know in advance I want to find it again.

Due to the usually much larger number of files versus groups, a Go to Group is far more feasible than a Go to Document.

Tagging, flagging, labeling, rating, etc. could be used along with smart groups.

Tagging, flagging, labeling, rating, etc. could be used along with smart groups.

All of which assumes I know in advance I will want quick access to a document in the future.

Then searching would be the best bet.

I don’t buy the argument that Go to Document doesn’t exist because it is not feasible, when this interface already exists for ‘Edit > Insert > Item Link…’. This is very similar to the Go to Group interface, but it shows all database items. Hence, core functionality and design already exists and would only need to be duplicated to open a document rather than inserting an item link to it.

Searching is very cumbersome in comparison.

“Find in database” is ALMOST there. Lately when I want to reopen a document, I just do a Cmd-Opt-F, type in what I want, check to be sure I’m searching in the appropriate scope, and click on the document or group I want to open. Then Esc out of the find modal when I’m done. Easy peasy!

The next steps would be to make selecting a file easy to do from the keyboard, by using the arrow keys, and also to have the search box pop up. @mrmsdbdl posted a couple of very nice screenshots here:

And the next step after THAT would be to make the quick-open palette do double duty as a command palette. Or maybe have a separate command palette. Right now I use a combination of Paletro and a keyboard maestro conflict palette to navigate to commands that I use often, but not so often that I can remember the keyboard shortcuts. 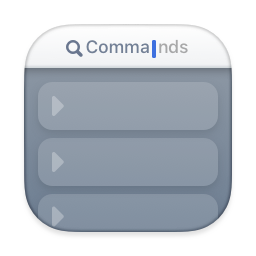 Command Palette in any applications

I don’t know whether this topic is a bit old, because it started when DT3 wasn’t released, but for me Go > To Document… is the quick open file for me. I use the CustomShortcuts app for mapping it to CMD + O. One nice improvement would be a more fuzzy search but maybe the results would be bad then.

But what strange is, that I can’t use opt + cmd + f and then the tab key to get to the results list. So I have to use the cursor to select an item. Is there some hidden feature to jump to the search results list?

But what strange is, that I can’t use opt + cmd + f and then the tab key to get to the results list.

Ctrl-Tab or Shift-Ctrl-Tab are the recommended shortcuts to switch between the various panes/views (as Tab might e.g. be used in rich text views or web views). Or use the new commands in the Go menu and their shortcuts to focus a certain user interface element directly.