as I understood the counter of documents should be same on iOS as on macOS?!

My macOS shows more items count than on iOS.
How can I find out the difference?

Could you please post a screenshot that shows the differences? Thank you.

all database are synced without errors. 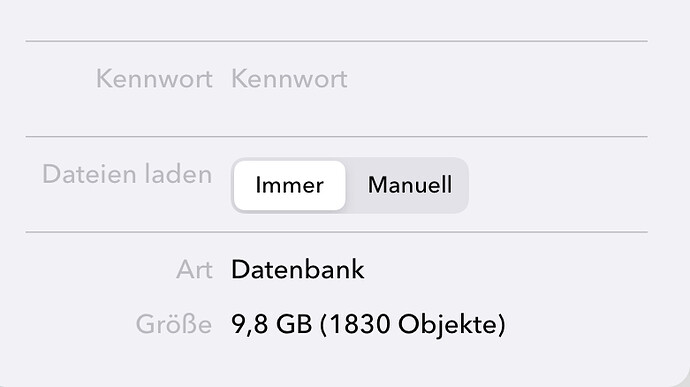 In my personal experience I’ve had various moments where the item count is different between devices. Questions about item count have been asked before on this forum several times. To me, the item count appears buggy, but it’s difficult the figure out why.

The most extensive description I’ve made about this issue can be found in the post below. That setup involved completely new installed software, but still one device reported one item less than the others. After deletion of that device (and resync) all databases were suddenly similar. @eboehnisch added it to his to-do list (see his reaction at the end), and in my recollection new DTTG releases did indeed address item count in the change log. But perhaps some root cause for item count discrepancies is still present?

I’ve deleted all DTTG2 and DTTG3 installations and setup a competely new sync store on a WebDAV server using a DT installation on macOS. I use multiple databases and all have synced properly to all iOS devices… except 1 database which is reported to have 1 item less than all other devices including DT. I check the number reported under the ‘i’ symbol at the bottom in DTTG. How can this be? To be clear: I consider this to be a completely new setup and immediately after the devices have synced a…

Thanks Solar-Glare, I have also had the same experience over the last few years but I thought this was solved in one of the latest versions. I also could’t see any differences lately.
Sorry if we should better continue the old thread instead of a new one.

Version 3.3, out this morning, had several fixes here. In doubt, long-tap on a database and choose Verify & Repair. This resets all caches and updates some internal structures that might lead to wrong counts.

Sorry if we should better continue the old thread instead of a new one.

There are many threads about this issue, so it doesn’t really matter. What’s noteworthy though, is the fact that various users mention it independent from each other.

Let’s see whether the new release brings a solution.

In doubt, long-tap on a database and choose Verify & Repair.

It is. We have fixed a few place where item counts were not updated but should have. The maintenance URL fix updates the so called “superparents” property of a record. And so far we don’t exactly know why it should ever get out of sync as it is always updated together with the item’s parents. We keep looking but version 3.3 should already make the updating of the counts much more reliable.

And so far we don’t exactly know why

I respect that, as any software product inevitably increases in complexity as time passes by. It might even be impossible to trace down some root causes if the complexity passes a certain level

(I wonder whether quantum computing beta-testing might somehow resolve such issues in the future, by calculating through all possible combinations of bits).

If you can ensure that it is only a counting problem I would not care. I just have a look at it to ensure no documents get lost over the time due to sync problems.

So what’s the item total in both now?