Sync-ing between two users on Devonthink

Is there anyone out there that can work me through sync-ing two users in one common Dropbox, on two different computers? I’ve read the posts about the risks, etc… and I understand, but between myself and my partner we have a need to access/search the same documents offline and while apart.

I’ve read the earlier posts and they don’t make too much sense to me in how they work. If Dropbox isn’t the way to do it, another common server would be fine as well.

You could use a WebDAV sync database.

Are you both using Dropbox for individual syncing outside the collaborative syncing?

Interesting, I’ll give this a shot

This is what I was trying to accomplish, but honestly it doesn’t need to be dropbox. Maybe WebDAV will be good.

Okay I’m trying to accomplish this now, but I don’t know how to make a WebDav, I signed up for Azure, but not sure. Is there a step by step guide for this?

So you’re not both already syncing with Dropbox for your own unrelated data, correct?

Right now we are sync-ing with neither, clean slate. So I can work with anything so long as it can work on two different computers.

You would set up the Dropbox sync with the common credentials in DEVONthink on your machine and sync the database.

Then your colleague would set up the Dropnbox sync with the same credentials in DEVONthink on their machine and import the database from the Remote section in the sync location.

Now changes made by either of you would propagate to the other. 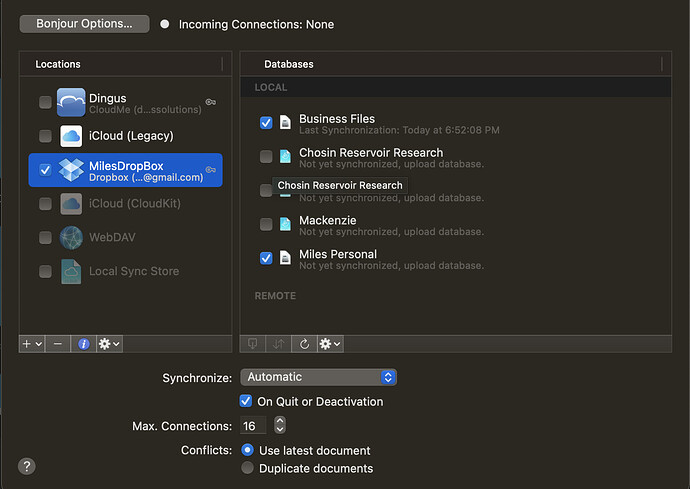 My partner’s screen, but nothing is coming in, I don’t think the credentials part is showing up, what am I doing wrong? 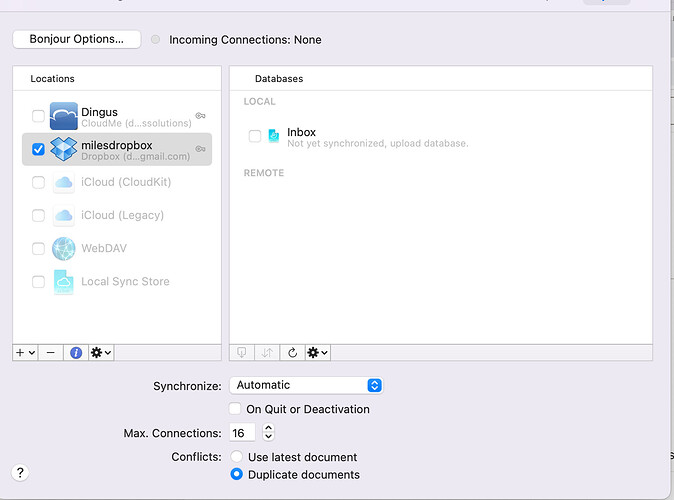 The sync store name is case-sensitive.

Actually when your partner signs in, the Store Name should list the available sync store to choose.

Have them delete the sync location and make a new one with the tip provided above.

It still isn’t working, do you have an instant messaging where I could go through this step by step? I don’t see anywhere to log into Dropbox itself, am I missing something in Bonjour? 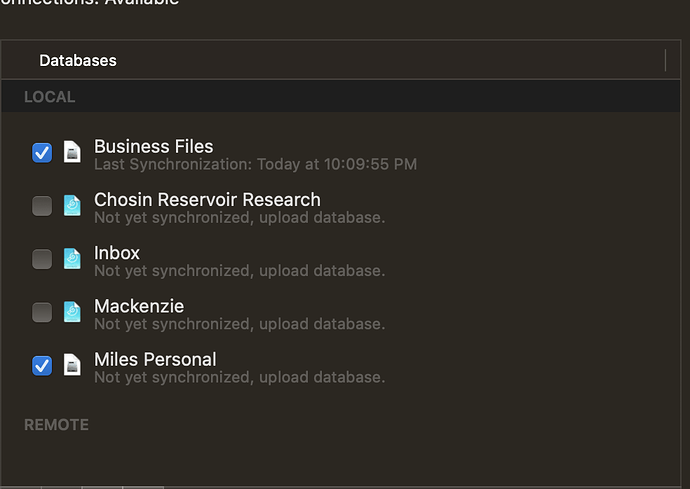 Nothing is showing up in “Remote” on either side, in addition one of my databases isn’t uploading or synchronizing.

From the info and screen shots provided, it’s really hard to tell what is going on and how you are setup.

As a first step, I recommend you go through the “Troubleshooting” Chapter, section on sync in the DEVONthink Manual, starting on page 186 of the Version 3.8.6 of the document (PDF).

As a second step, re-read and check if you indeed exactly followed the instructions for setting up a Dropbox sync, page 66 of the that same document.

Perhaps consider starting again? To do so, you can “Clean location…” the Dropbox set-up to remove the sync files on the Dropbox server. You will see that when you read the Trouble shooting chapter.

Last question: Does your Dropbox have enough space to hold the DEVONthink sync files? Paid or “free” account with Dropbox?

In relation to WebDAV, you should have a WebDAV capable serve. I don’t know if Azure has WebDAV interface, my Sinology has (if you enable and configure it).

Does your colleague already have copies of the database on their machine?
If so, they would be in the Local section of the sync location - after creating the properly named location as noted previously. This would merge with the sync data in the Dropbox sync location instead of having to import the database.

But nothing is showing up in the “Remote” section, like it should, even on my machine right?

Does your colleague already have copies of the database on their machine?

And no, you wouldn’t see anything in the Remote section unless your colleague synced a database of their own to the sync location.

No, there isn’t anything on my partner’s desktop.

The database is on mine.

Thus far, nothing has worked. Is there anyone like Live Support that I can call in to and see if this can be fixed? All these replies have been very helpful, but I cannot get it to work at all on my end. I do appreciate the feed back