Eleven days ago I noticed my Global Inbox wasn’t syncing. After cleaning the GI Database all was well until yesterday when another Database stopped syncing, and again cleaning the Database fixed it.

In both cases there were no error messages, verification passed, no indication that anything was wrong except the files weren’t on the other devices. This time I made this composite screenshot which helps explain what I saw: 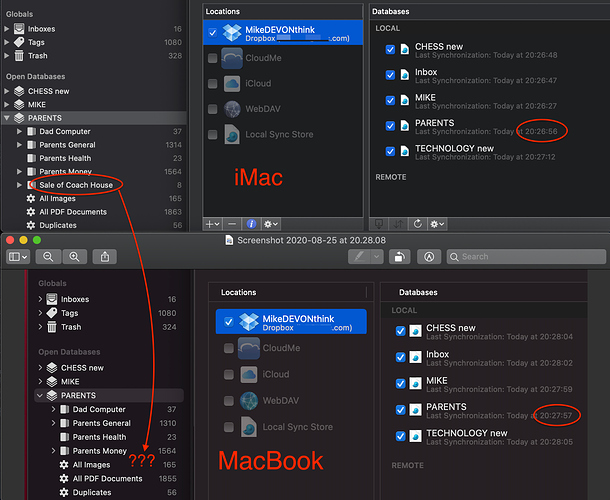 You can see that sync has apparently happened on both Macs within the last minute, but the Folder “Sale of Coach House” exists in the “Parents” database on the iMac, but not the MacBook.

I also have two iOS devices and they had the same files as the MacBook. In other words when this happens the iMac is not uploading the files.

There are two main issues here for me:

After reading several other threads here, and also the Take Control book I think the solution for me may be to add Bonjour sync in parallel.

I am a sole user (no teams or other people) and my four devices spend 99% of the time on the same network. So in fact I could probably turn off Dropbox sync.

That’s how I do it. I keep Dropbox on in addition to Bonjour. By the time Dropbox does it’s thing, little to do since Bonjour so fast. Keep in mind that with Bonjour, my understanding is that only one device can sych at a time. So your four devices won’t run in parallel, but in series. Depending on the volume of data, you may not notice, especially since my hunch is that you don’t use the four devices in parallel anyway.

Thanks very much @rmschne. Your hunch is right…I can only work on one device at a time

I have set up Bonjour and all seems to be working OK, Dropbox and Bonjour in parallel. As I said, when I am at home (most of the time) all my devices are on the same network. Can I turn off Dropbox while at home and just turn it on when I go away?

When I go away, typically to my daughters’ houses, and with the three Bonjour client devices, will they sync with each other on Bonjour while away, because they are on the same network (although not of course the same network as the iMac Bonjour server which always stays at home)? I am asking this because I suspect I could completely turn off Dropbox. I would want the three devices I have taken away to sync with each other while I am away, but would be happy for the iMac to catch up via Bonjour when I get home.

If you turn off Dropbox, it will take longer to sync when you want it to synch when you go away. The bytes gotta move eventually!

You don’t say what the Bonjour client devices. If DEVONthink turned on on all devices then what’s would stop them? If they aren’t turned on or DEVONthink not running, then they won’t sync.

My best advice. Keep Dropbox running all the time. Costs you nothing, far as I know.

DEVONthink sync is turned on for all databases all the time. There are no circumstances where I don’t want sync to happen.

The only reason for thinking about turning off Dropbox syncing was mention in some threads about confusing “busy” messages appearing because Dropbox and Bonjour were both trying to sync at same instant. Not a problem per se.

Also thinking about simplicity of only one method, but as the moment I am inclined to follow you advice and leave both on all the time.

i don’t even know where to look for such messages. And what’s wrong with such a message? “Busy” is “busy” so something is programmed to wait until “not busy” (I guess). I wouldn’t jump to the conclusion it’s a problem. I would probably be thankful the computer did some thinking for me. And if DEVONthink didn’t permit two (or more) sync services running at the same time, wouldn’t the developers put that “rule” into the dialog box for synching?

My best advice: try it. Worst can happen you detect it doesn’t work.

Delaying movement of bytes only means it takes longer to move the bytes when you allow it.

No I don’t think the “busy” was a “problem” either, but was mentioned.. In the same thread Jim Neumann definitely endorses having both active and says turning off Dropbox is unnecessary, so not expecting a problem.

Blockquote
I don’t even know where to look for such messages. And what’s wrong with such a message? “Busy” is “busy” so something is programmed to wait until “not busy” (I guess). I wouldn’t jump to the conclusion it’s a problem. I would probably be thankful the computer did some thinking for me.
Blockquote

Here are the messages (screenshot attached). In the Log window. I fully accept that DEVONthink supports syncing with two methods, but I don’t feel it is good practice to have a log being filled with messages I am supposed to ignore. I am quite likely to miss something that matters.

DTTG also puts a warning triangle on the cloud symbol for same reason.

I would be grateful for confirmation from DT that my messages are indeed to be expected when Dropbox and Bonjour are used in tandem, and not something else. 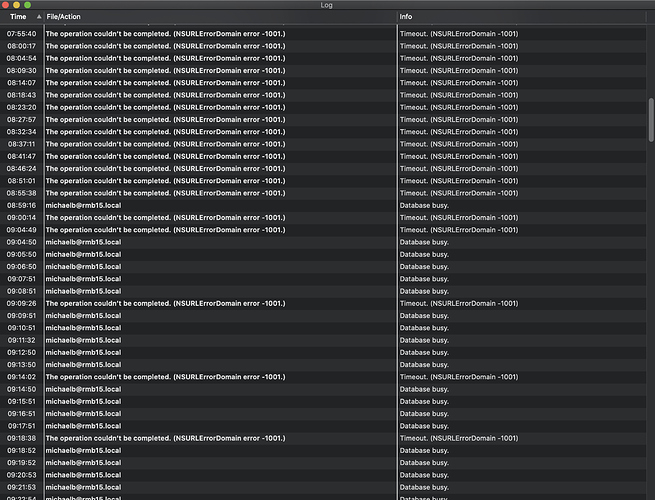 As this directed to me, all I did was do a Google on “devonthink database busy” and found lots of hits. You might want to look there. Otherwise, wait for comments on this from BLUEFROG (DEVONthink support).

So do you have Dropbox and Bonjour in tandem, and NOT get these log messages?

Not there. But that only indicates that my machine is not busy now, not that it hasn’t been busy in the past or future. I don’t think that helps you.

If I was outside the local network and I wanted a sync on these portable devices, I’ld start up DEVONthink and sync via Dropbox. Otherwise rely on a recent local network sync,.

Thanks sounds you don’t normally have both Dropbox and Bonjour active but only turn on Dropbox when outside the local network?

I turned off Dropbox two hours ago as an experiment and have had no busy or timeout messages since (compared to every minute or two with it on).

Nope. I have Dropbox running all the time on the “server” iMac, along with Bonjour.

As a check, I also turned on Dropbox AND Bonjour on the Macbook and it worked just fine (after doing some catch up as the local Dropbox folder were out of synch with Dropbox’s servers which were kept up to date by the “server” iMac) with no log entries of “busy”. I did also turned on simultaneous Bonjour AND Dropbox on the iPhone and synced two of the databases, and worked. I did not notice “busy” notices, but then it’s probably a coincidence when “busy” happens.

Even though your syncs show “busy” do they eventually become “un-busy” and do their thing?

Well my files are in step on all devices but I don’t know whether by Dropbox or Bonjour (before I turned off Dropbox). So presumably it is correct that the busy becomes unbusy, and from the other threads I was expecting occasional busy and timeout messages …just not the flood as per my screenshot.

I have sync set to “automatic” on all devices. Presumably a defined interval might reduce the incidents.

Well my files are in step on all devices

If all “in step”, are you sure there were incidents to care about?

Not quite sure what you mean by “incidents”. When I started the thread, while using Dropbox only, there certainly were “incidents” of non syncing, not just on this occasion. Seems to be quite a common report for Dropbox.

After going the combined Dropbox and Bonjour I have not been aware of sync errors, but a lot of “incidents” of busy and timeout, which may indeed be nothing to care about, except the volume of them…why are they rare for you and a flood for me?

Using your word, “incidents” when you say “Presumably a defined interval might reduce the incidents.”

Re-reading the thread I am going to adopt your setup ie:

iMac is the Bonjour Server and also syncs to Dropbox.
MacBook and iDevice clients are normally only Bonjour but if away from base turn on Dropbox.

It makes a lot of sense to keep Dropbox continually up to date (via the iMac) so that it is ready to update the clients when they are away from base.

Thanks for the help.