I have a problem with the “Global Inbox” at DTTG.

I use DTTG version 3.1.8 on the iPad pro and iPhone

On the MacBook DevonThink3 Pro in version 3.7.2

I syncronize database and the Global Inbox via icloud (CloudKit).

The syncronization of the databases works.

However, on the iPad pro I always have files in the Global Inbox that have already been edited on the MacBook and moved to the database.

What could be the reason for this?

I also get an error message every time I sync on both iPad and iphone. However, I can not do much with this and do not know how to fix this error. 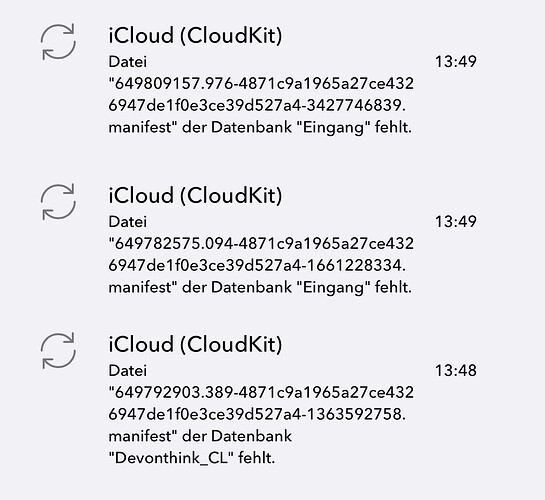 Are you using a VPN?
If so, what kind?

Yes - I hadn’t noticed, but a VPN is active on the iPad (NordVPN).

But I only use it for streaming to avoid geoblocking.

Thanks for the info.
We had a report from a user having sync issues and also running NordVPN. In fact, he was also reporting missing manifests, and often. He mentioned there are known issues with Nord and iCloud. When we looked into it, there certainly does seem to be issues between them.

The user switched to Dropbox as he has had no such issues with Nord, Dropbox, and our sync.

When I switch to Dropbox, can I just leave all the data on the iPad and IPhone and just set up a new sync location or do I have to delete everything first and set it up again.

I have now turned off NordVPN. But the error message still persists.

I have now turned off NordVPN. But the error message still persists.

Correct, as the problem has already occurred. Disabling NordVPN won’t resolve the current problem. It will hopefully stop future issues.

Regarding the reported issue, do this…

In DEVONthink To Go’s Settings > Sync : Locations, left-swipe the sync location and choose Verify Thoroughly.
Once it’s finished, a warning triangle will appear on the sync icon in the bottom toolbar. Touch the icon to see the results.

If errors continue to be reported… In DEVONthink To Go’s Settings > Sync: Locations, tap the sync location, then left-swipe the database and choose Clean. Repeat the clean with the second database reported.

Check the sync icon in the bottom toolbar for a triangle. Tap the sync icon to see if the clean was successful. If it shows the sync data was successully cleaned, go back into the sync location and enable syncing it again.

When I switch to Dropbox, can I just leave all the data on the iPad and IPhone and just set up a new sync location or do I have to delete everything first and set it up again.

You can add a Dropbox sync location to DEVONthink To Go on one device but leave the old sync location enabled for the first upload to Dropbox. And this is after the previous steps are performed.

Alternatively, you could merely set up the sync location in DEVONthink on the Mac, sync to it, add the same location to DEVONthink To Go, disable the old sync location and enable syncing with Dropbox. This should present no issues will shallowly synced content as the Mac would have uploaded the content to the Dropbox sync location.