I‘ve been a DEVONthink user for many years, and I increasingly used DTTG as well (since version 2) on my iPad Pro. What I have only sparingly done so far is real integration between the two through syncing.

Last summer I tried a first, limited experiment with a database for an article I wrote. I set it up on the iPad and used a WebDAV-based sync store to share it with DT3 on my MacBook Pro. It worked really well, and so I thought I should expand this integration. DTTG 3 with its additional capabilities is another incentive.

Needless to say I want to be careful when syncing so that no data is lost. So my question is whether I should first switch on syncing from the Mac (where essentially nothing will be uploaded to the sync store) and then the syncing from the iPad (with lots of data), or whether it would be better the other way round (iPad with lots, then Mac with nothing)?

I‘d be grateful for any suggestions (and remote handholding!).

Thanks for any help or advice you can give. I use DTTG 2.7.9 on the iPad and DT3 3.6.3 on the Mac. I thought that I should sync first and then update to DTTG 3, but if there’s a reason to proceed otherwise, thanks for any hints!

The data loss issue happened right when DTTG 3 was introduced and has been fully resolved.

That said, if you want to be 100% comfortable that things are OK, then just set up a new database only for syncing; populate that database by duplicating items from your current production database(s) and convince yourself that the sync works well.

Thanks for your advice. I was not referring to (or am afraid of) the initial DTTG 3 data loss problem. It was more a question of general best practice regarding the sequence in which I should sync. Any ideas about that?

Further to your answer: how would I (on an iPad with DTTG 2) copy everything from the Global Inbox to a separate database? There’s lots of items, and I don’t know how to mark them all…

If you two finger slide on the item list to select items. If you continue dragging, the view will scroll. When you have your selection, tap the Organize button in the bottom toolbar and choose Move.

Many thanks for the hint - but I‘d be interested whether you think this cautionary step is necessary, or whether I could just sync - and if so in which of the two sequences I suggested in my original question?

It shouldn’t matter but I’d sync DEVONthink To Go first as it has more data. Then import/sync the database to the Mac.

Thank you! That’s what I‘ll do. And then upgrade to DTTG 3.

Sorry, have to come back to this. For if I select multiple items (using two finger swipe), there is no organize menu visible. I am at a loss - both because trying to mark 1333 items with two finger swipe does not work (scrolling down is slow and interruptions in marking are the consequence), and because there is no organize menu.
The reason I try this route (instead of simply syncing) is that when I try syncing the Global Inbox, DTTG 2.7 complains that the database has “not been completely downloaded to this device. Uploading it to another sync store will lead to problems as some items are missing.”
Screenshots attached - any help appreciated! 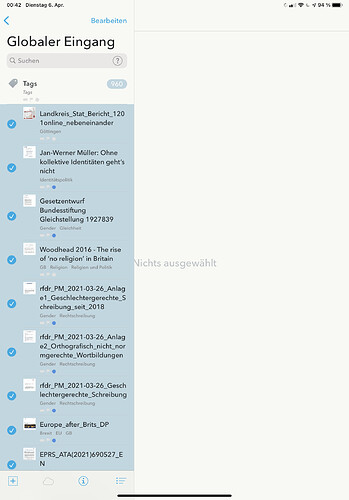 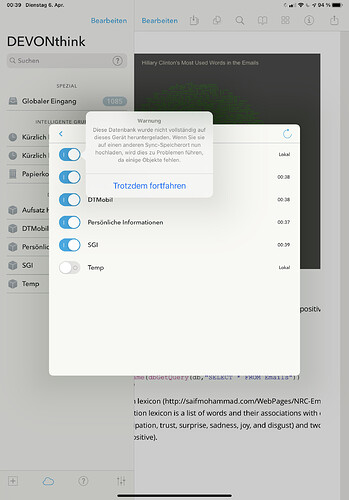 Sorry if I draw your attention to this again, @BLUEFROG and @cgrunenberg, but it is quite an urgent matter for me.
Can you point a way out of the problem of neither being able to sync the Global Inbox nor managing to move 1333 items with 2.8 GB to a temporary database on DTTG 2? I describe it in detail above.
Many thanks for your help! 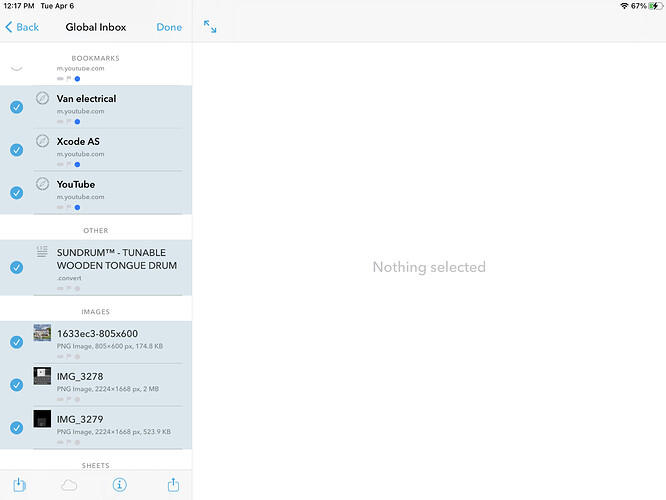 In your second screen capture, are you connecting to the same sync location you imported from (which I think would be the WebDAV connection you mentioned)?

Thanks for your help!
On the first screenshot you will notice that while your screen shows an organise button, mine shows an add item button in that space. I use DTTG 2.7.9 - do you use DTTG 3? And, further question, should I perhaps upgrade before I move the data?
On the second screen shot, there was never anything imported or synced in the Global Inbox through that (yes, WebDAV) connection. I simply accumulated the 1333 items over two or three years of intense use of my iPad Pro as a bucket for my work. So I find the dialogue box puzzling, but sufficiently threatening to scare me off.
Should I ignore it?

Yes, I would personally suggest moving to DEVONthink To Go 3, for a variety of reasons.

If those items were created in DEVONthink To Go, they should have their contents and you should be able to sync without incident. You could spot check for any shallowly synced items by looking for a cloud property icon under an item’s name, like so…

Did as you suggested.
Two problems: