Syncing is driving me nuts!

Syncing is driving me nuts! When I first got DT3 I started two new databases, one for Archiving Email and one that I just call Clipbook. I put them in a folder that I called DEVONthink Databases that I made a Local Sync Store and set up Bonjour Options. All this on my 2009 Mac Pro (El Cap) and a new (to me) 2012 MacBook Pro (High Sierra). Both were set up as Local Sync Stores. This all worked just fine syncing the two databases.
Meanwhile, I copied a small database of Poetry to the MacBook, because I had to do some readings from it and that worked fine but I hadn’t set up any syncing for it. Then I decided to put one of my other several older databases named Today to use with both machines and thought I might as well sync the Poetry database so I could add to that and have it on both machines as well.
I tossed the Today db into the DEVONthink Databases folder on the Mac Pro and it showed right up in the Sync under the aegis of the Local Sync Store as well as copying it to the folder on the MacBook and it claims to be Synchronizing on the Mac Pro. However, it doesn’t show up in the list of the MacBook.
I also put the Poetry db into the DEVONthink Databases Folder and a copy of that into DEVONthink Databases folder on the Mac Pro. That db is not showing up on the Sync Preferences of either computer.
What do I have to do to straighten this out?
Thanks!

So you put the Today database and the Poetry database on both machines and have it open on both?

Poetry is open on both of them, Today on Mac Pro, but when I try to open Today on MacBook I get a message that it is already open and if I open on the second machine, I might lose data, so I left it off for now.

if I open on the second machine, I might lose data

I did not click continue, but Cancel, figuring you might have some advice for me on that point.
I originally did a Finder Copy to get the Poetry db to the MacBook.

I have since opened both db files. They seem to be operating correctly, except that Today shows up as “REMOTE” whereas everything else on both computers as “LOCAL”.

A screen capture could be helpful.

Sure! Coming right up!! 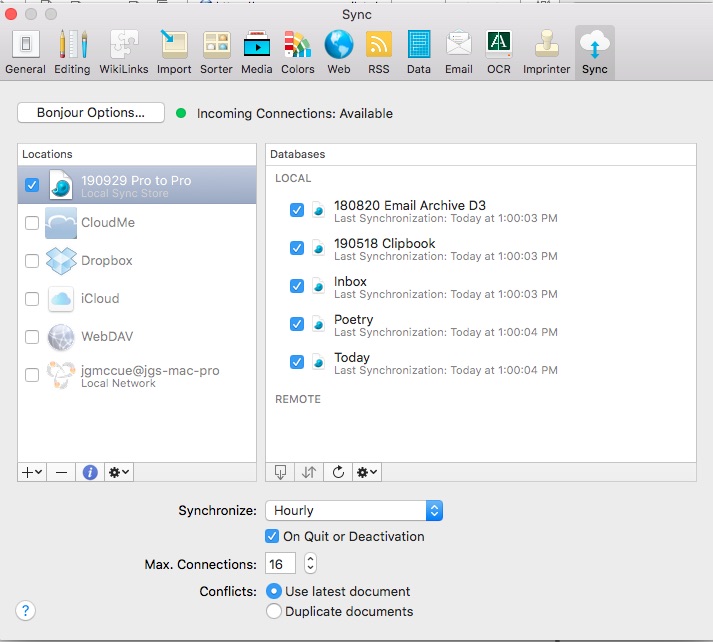 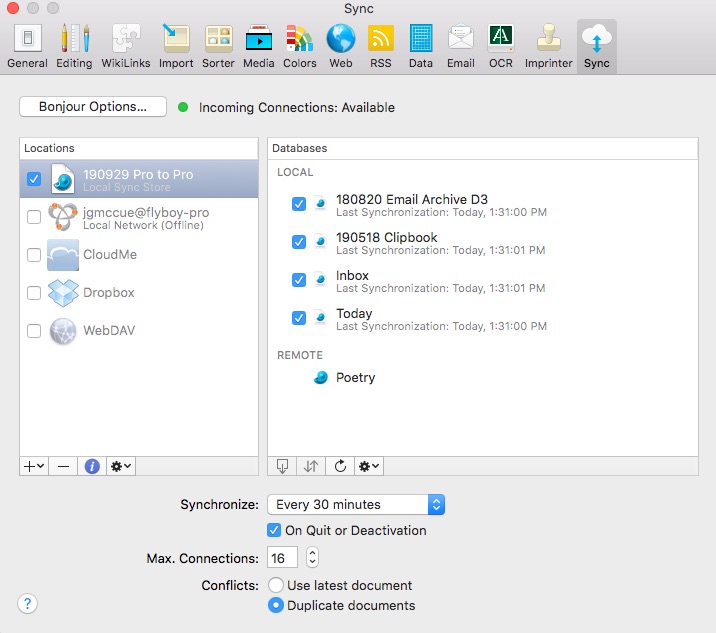 Funny thing, though. Last night, if I’m not crazy or just plain old and mentally decrepit (75 later this month), it was the Today db that was below the REMOTE instead of the Poetry db. 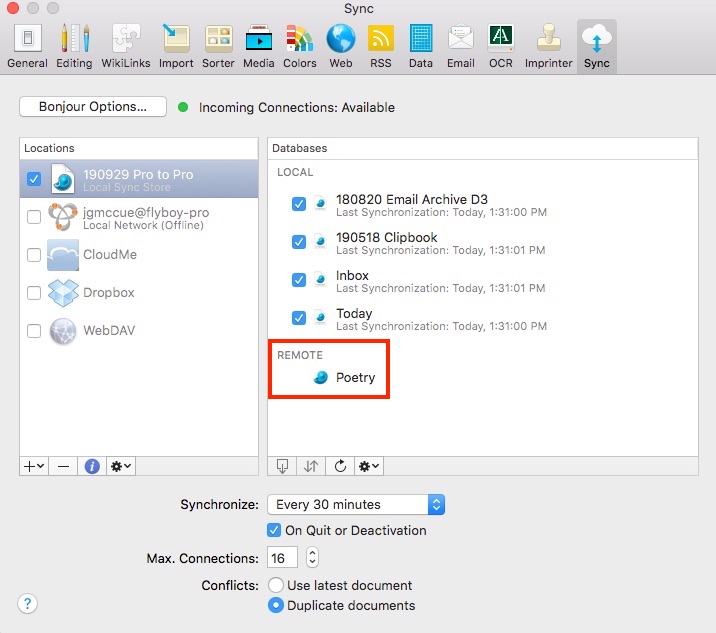 Any database in the Remote section of a sync location is either not open or hasn’t been imported on the machine.

If you don’t have a copy of the database on the machine, double-click the one in the Remote section and save it to the Databases folder in your Home directory.

I have it imported and though I haven’t gone upstairs to check yet, I’m pretty sure I had the Today open last night and it’s closed now, but Poetry is open but was closed then.

Thanks so much for your descriptions of how the program works in Sync Mode. Those details make it much more understandable.

I thought I had this all solved, but now I find that the databases don’t seem to be actually syncing with each other. Is there a way I can troubleshoot this and find out if they are even talking to each other or who they are talking to if not each other?

I think I should have added something to the question above: The databases seem to be running the sync mechanism at the prescribed intervals and they think they are doing something, but no results that I can see.