I use the reference manager software Sente to store my academic PDF references. When syncing between two computers, Sente allows one to either: 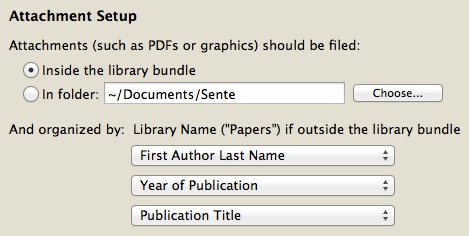 Ideally, I would like to have a database with files contained inside the database on my laptop synced with my desktop, which has the files in nested folders outside of the database. Is this possible? Thanks.

For DEVONthink, that option does not exist at this time.

What is the advantage?

The main advantage would be that I could keep all files contained within a database on my laptop. When using a laptop, this would allow me to place the database inside an encrypted disk image for more security, as the laptop is more vulnerable to physical theft. Even if using FileVault 2, a laptop could be vulnerable if accidentally left logged in with files open.

With a desktop, I am less concerned about the unit being physically stolen. If so, the computer would have to be unplugged, making FileVault 2 more useful to prevent unwanted access to data. With the desktop, I could have the original file folder structure preserved and available for use outside the database. Seems like it should be possible based on the way Sente sync works.

Seems like it should be possible based on the way Sente sync works.

Maybe, but for now that’s not the way DEVONthink sync works

Since security is important, it might be best to import all your files into the database package so all instances of your database would be the same regardless of hardware locale.