Syncing with iOS - not all databases are shown

I’m trying to sync one of my databases with my iPad. I’ve set up everything ok, but for some reason, only my global database shows up in the sync preferences on my Mac (see screenshot attached). 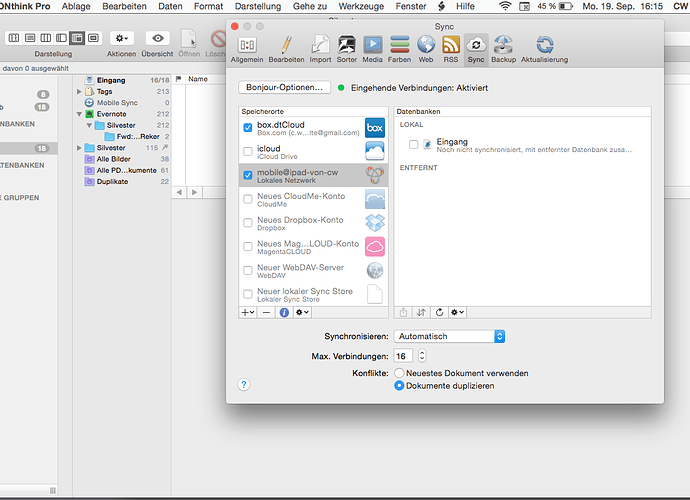 I’m not sure why that is. The database “Silvester” shows up in the sync preferences for Box, though.

It appears that the location you show as selected in the screen shot is your iPad. The global inbox shown there is the one on the iPad not the one on the Mac. Your iPad doesn’t have other databases. Sync the iPad with Box instead, perhaps.

korm is correct here. Your setup is not correct. Sync will not push databases to another device. Here you are telling your Mac to treat your iPad as a host. If your iPad had databases you created on it, this would work fine. But you want the Mac to act as a host to the iPad.

Ok, I think I get it. I have to select the database “Silvester” on my iPad if I want to sync from my Mac to the iPad. It’s a little confusing because in all the other dialogue boxes you decide on the Mac which database you want to sync externally, e.g. with a cloud service.

I’m at a place with very spotty wi-fi, so Box doesn’t work reliably. That’s why I wanted to use local syncing. And it’s working now!

Many thanks for your help!

No problem. On the first import Sync is always a pull. Cheers!