Table of contents and new files

Then I would like to add a new blank markdown file for each one of that.

Nowadays, I use to do that manually and it spent a lot of time. 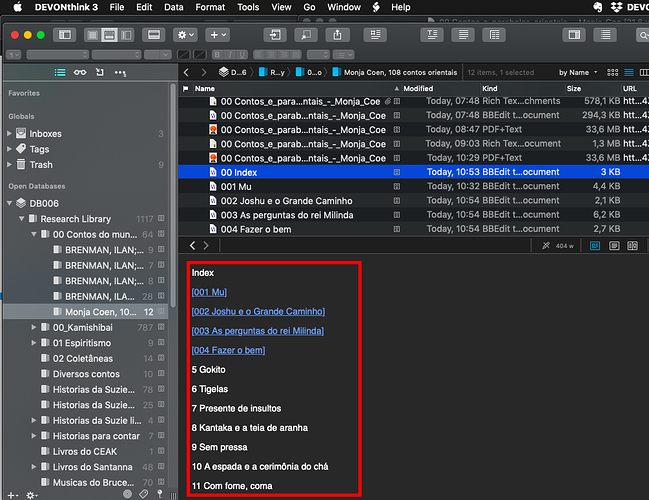 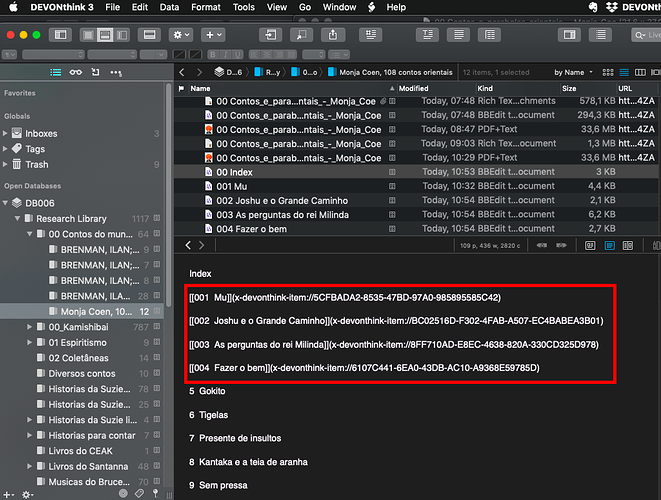 This is incorrect syntax for a Markdown link. There should only be one set of brackets on the link text.

You can Command-Option-drag and drop files into a Markdown document to insert a link. 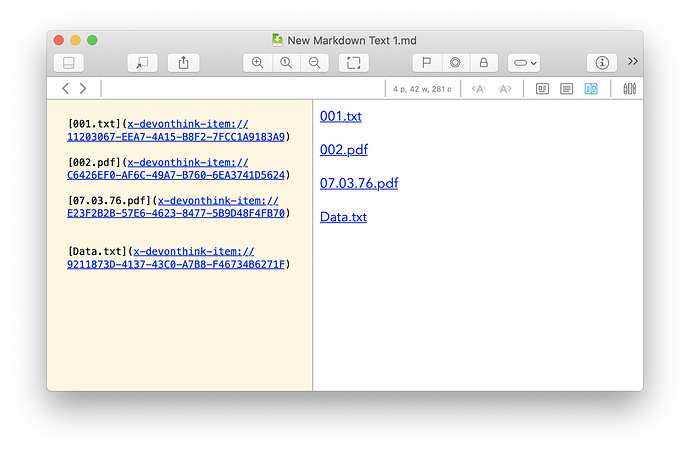 This is very useful!

Perhaps, it is not my doubt.

I would like to create FIRST a list. and then I wish each item of that turns a new empty markdown file.

I’m not sure, but I think that if I type [[text]], a new blank file creates as a new file with the name text.md directly.

I’m thinking about a kind of wiki command.

Then I would like to add a new blank markdown file for each one of that.

If no text is selected it displays a dialog where you can provide a vertical list of names. To add a new line in the dialog use option + return (⌥ ⏎) .

It optionally creates a TOC.

If no text is selected it displays a dialog where you can provide a vertical list of names. To add a new line in the dialog use option + return ( ⌥ ⏎ ) .

It optionally creates a TOC.

Many thanks @pete31. It works perfectly!

Hey pete, you really shared a lot of scripts in this community~

I changed it myself based on yours, very easy to use!

A small question, whether the script can do the following:

I want to use this script to generate notes that index the contents of the Group. With the current script, I need to manually copy the link, add a “!” and delete the name for the image file. I wonder if it can continue to optimize

A small question, whether the script can do the following:

You’ll find most, if not all, of what you need to modify it in the various script modifications I wrote for you in the last weeks in this thread.

The modifications you asked for in the past were all about a very specific database setup in which you use images and thumbnails in an unusual way. I already had a hard time understanding your first desired setup and as it turned out you didn’t really know how it should look like as you’ve changed your mind several times.

For most people who just want to solve a specific task for which a script would be useful (or the only way) it doesn’t make much sense to try to modify an existing script on their own or to learn AppleScript, so I’ll be happy to write it.

In your case however there is this very unusual database setup, plus you’ve added DEVONthink features to your setup which I don’t use myself, plus you change the setup all the time.

I wonder if it can continue to optimize

I think what you mean is: you wonder if I will modify it for you. No, I won’t. I won’t be the guy who modifies scripts for you on a regular basis.

Yes, I’ve shared a lot of scripts here, but what do you expect me to do? Do you want me to modify every script I’ve shared to fit your specific setup? Sorry, I won’t do that.

And I don’t think you should expect from other users that they’ll wrap their heads around your unusual setup every time you want someone to modify or write a script, but maybe you’ll find users who do that.

Don’t get me wrong, there’s nothing wrong with your setup or with asking for help.

But altough I understand that you’re a new user and don’t know AppleScript I think that it doesn’t make sense and actually is quite impolite to want someone else to do something for you only to find out that the time spent with helping you was all for nothing because you’ve changed your mind again.

So my conclusion is that you’ll have to learn AppleScript.

If you do chances are that you can realize exactly the setup you want after some weeks or even days.

How to get started with AppleScript in general:

How to get started with understanding what happens in a script:

How to explore an app’s AppleScript dictionary:

How to find scripts on the forum:

Sorry!!!
I apologize for my rudeness and blame myself for my ignorance. You are right. My needs are too personal. I have no reason to be willful anymore~

For me, Applecript is indeed a bit difficult to learn, and there is no similar community around me to communicate with. There are even fewer people around me who know Applecsript and use Dt at the same time…

But thank you for your study guide, I will learn it slowly~ I would also like to give back your help very much if possible, thank you again!!!

Also Script Debugger, while capable, is not required. Script Debugger can be a lot to take in. I’ve professionally automated for 20+ years using only Apple’s Script Editor and the results pane or Log window… with pen and paper also. Still very handy today.