Ok I believe this is the last setup question–thank you all (and especially @bluefrog) for putting up with what I hope have been sufficiently justifiable queries.

This one is really weird. I’ve now set up several DevonThink databases that simply Index specific folders of PDFs in my Finder/Dropbox–essentially to serve as the front end management and search engine for ALL my research PDFs. I’ve set the same software/Finder architecture up across three different Macs, which are now all talking to each other very nicely (with the underlying PDFs mirrored on all three computers via Dropbox and the database existing separately on each computer, syncing through the built in Devonthink sync process)

Here’s the thing. I spent about 3 hours yesterday tagging many of the PDFs–stuff like “Priority” “Finished Reading” “History” “Law” “Excellent” “Scanned for [search term]”, so that searching along those dimensions will be very easy. Then I synced the databases and quit DevonThink. When I opened the database again, almost all of the tags were wiped from the individual files, though the Tag as a category continued to exist in the “Tags” folder.

I re-tagged one of the folders this morning to see if it would happen again, and it did. This time I screen shotted, here’s a Before pic (when I’d tagged everything but hadn’t yet quit): 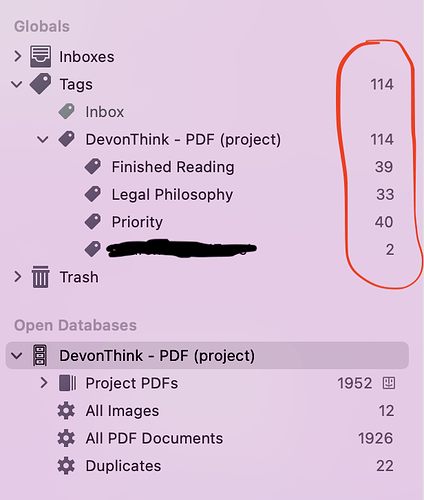 and here’s an After pic (after the syncing had happened and stripped the tags off of almost all the files): 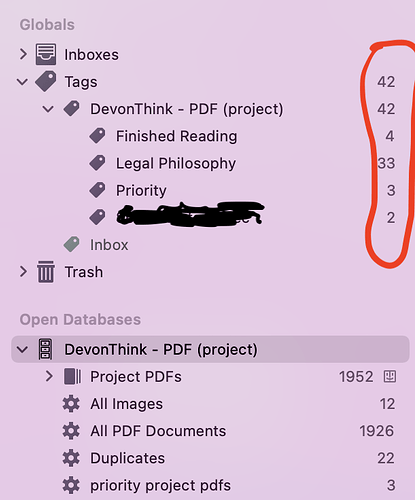 I’ve been researching this all day, and have ruled out various things. Based on what the manual said about tagging indexed items, I thought maybe they’d be visible in the MacOS. Nope: here’s a search for one of the tags that I originally attached to like 40 items; only 3 remain even when looked at from the Finder:

The best clue I’ve found is the Dropbox sync record, which shows the tagged files being updated after I open DevonThink the second time. So something is happening to them in the Finder that undoes the tags.

But what!?? It feels like the answer might be implied in either this thread or this one, but I’m not good enough with software architecture to completely get it. This is a total shot in the dark, but would the “DisableFinderTags” preference referenced in those posts be relevant here? That’s the best I can figure out from my technically impaired research today, but there’s no way I want to try it unless I understand what it does.

Help?? Tagging these PDF files as described above would be an absolute gamechanger for search and workflow management. I’m really really hoping to figure it out…

FWIW on (1), here’s one of your recent posts that seems relevant: "exclude groups from tagging" - pros and cons? - #5 by BLUEFROG

I’m no expert, but I find myself wondering if there is a fight going on between Dropbox synchronisation and DEVONthink sync. If both of them are trying to synchronise the same set of files, they may be getting out of phase, and the “new” versions are being replaced with older versions that one of the sync mechanisms “thinks” is newer.

Just my personal experience, but I find that sync is a rich source of problems, and I don’t mean with DEVONthink in particular. I’ve encountered it with various programs and services. iCloud is particularly slow and unreliable, and I imagine that CloudKit suffers from similar troubles. I know that I regularly have to use Cirrus to unjam iCloud sync. I have given up trying to use DEVONthink to index Finder folders that are also synchronised by other services because I find that it causes too many problems. I know that others have more success, but it has been problematic for me, and there might be any number of reasons (slow internet, outages, etc) that have nothing to do with DEVONthink.

I hope you find something that works for you.

thanks – I appreciate that. I have some concerns about how everything will go but my database is so central to the research workflow that i feel like i’ve got to try this. Backing up and doing database health scans regularly, so hoping that if something goes awry I’ll catch it quickly and be able to restart with a new solution…

@bluefrog - Yes, syncing via Dropbox. And I’ve so far had no other problems with my Dropbox sync. Custom metadata (which I’ve added after your suggestion in this thread) does seem to persist, though I haven’t tested it thoroughly yet.

Yes, indexed groups are excluded from tagging by default when in a database with group tags. You can remove this exclusion via the contextual menu or the Exclude from section of the Generic Info inspector, as needed.

On one hand, this makes me think: “is there a single setting I could adjust to make this work?” (Note that, per screenshot below, the “Tagging” option is grayed out under the “Exclude from” in Generic Inspector). But on the other hand, I don’t understand why I could tag the indexed files in the first place if the problem is a default that indexed files don’t get tags. Feeling very thick…