I’m reluctant to post this, because all I have is some subjective impression, not a scientific study. But nevertheless: (Seemingly) since I upgraded to 2.0.4, the response of DTTG is markedly lagging. Scrolling down long lists, say the Global Inbox, frequently freezes for several seconds. More pronounced on my iPhone 6 than my iPad Pro 12.9. Prior, the responsiveness on both devices was great.

Hmm… I’m not hearing other reports of this. If you could start a Support Ticket and include screencaps of the File > Database Properties for the Synced databases, that would be a good place for us to start. Thanks!

Will do by the weekend. As I said, I added virtually nothing during the period in question (a handful small files), so DB size (be it number of files, number of words or total disk space) is not a prime candidate, unless there is a relatively sharp cliff to fall off.

If no one else experiences anything like this, and it clearly seems to be that way, then this is a strong hint that something has gone wrong on my end, but it’s hard to see what. Once I’m through with my conference presentation here, I’ll re-install DTTG and the DBs on my iPhone and see what happens.

Not entirely related: 3 weeks ago, one of the DBs on my iPad suddenly got funny in that spontaneously a few pdfs were no longer “displayable” I could not check their integrity, as the “open in” was no longer offered for them. As time passed, more and more pdfs got affected by this disease, which eventually, but slowly spread to another DB. Very odd, almost exactly like an infectious disease. Same files were just fine on iPhone and Mac. Removing and resyncing these DBs on the iPad fixed this.

I’m seeing the same thing. I have a database (~8,600 documents) set to download on demand, synced via Bonjour only, and it has become unusable with 2.0.4. I have only downloaded 11 documents of the total in the database to DTTG, and it takes ~6 seconds from when I click on the database name for the top level of Groups to display. Scrolling up/down in the top level of Groups (~35) is almost totally unresponsive. Never had this problem prior to 2.0.4.

I also saw a slowdown when installing 2.0.4. Even scrolling and opening help was very laggy. In my case it was temporary, and went away within a day. Perhaps it was doing something behind the scenes – I have no idea. But after that went away, it returned to normal speed, and hasn’t been slow since.

How many words / unique words are in this database?

How many words / unique words are in this database?

See attached, but if I’m only syncing the metadata-why would the number of words/unique words matter? 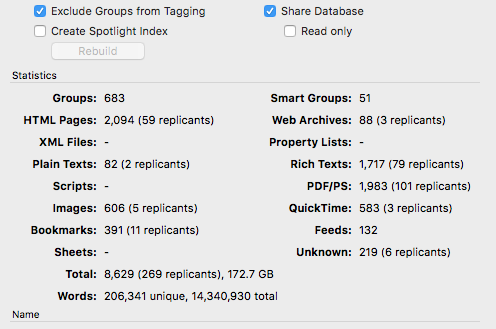 why would the number of words/unique words matter?

Because the metadata contains the index (ie. the words). It’s not merely the name, data created/modifed, etc. This allows a full text search, even when the contents aren’t on the device.

Still slow here, to the point that there is no way to use this database with DEVONthink to Go as things stand now.

Version 2.0.5 will increase the navigation speed by using much better caching. Already in beta test.

Indeed, with the upgrade to 2.0.5. things are back to what I remember prior to 2.0.4. Again, my DBs have not changed in any significant way from 2.0.3. to .5 days. So I conclude that this (very real, at times extreme) slowdown was most likely induced by version .4.