When my searches in DTTG seem to miss document I know are in a database I want to reindex the database to fix this. But how does the service task reindex relates to reindex-metadata or reindex-spotlight:

Does reindex include the other two? I.e. after reindex, is a reindex-metadata or reindex-spotlight still needed?

No. Reindex doesn’t do the other two. 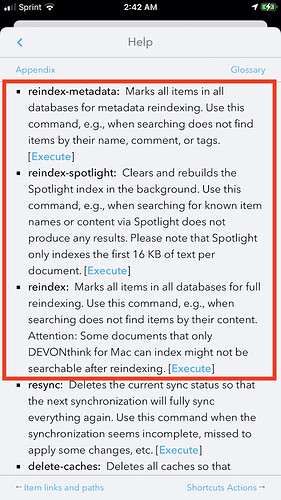 I sometime have a document which I have added on the Mac and it is synced to the iPad, but I cannot search on the iPad for a part of the name.

Then I usually do reindex - and after an unsure long wait I then can find the item. But according to your info reindex shouldn’t fix this, or do I confuse matters?

If you’re searching immediately after syncing, the index may not be updated yet.