I want DTTG to be my hub for everything and a today extension would be a good way of adding notes quickly to my database.

Do you have an example of another app that does this so we get an idea what you’d expect. The Today widgets I have seen so far are usually not overly interactive.

Do you have an example of another app that does this so we get an idea what you’d expect. The Today widgets I have seen so far are usually not overly interactive.

Yes. The drafts app, or apple notes are examples.

Also you can enter text into Pcalc today widget. (albeit numbers).

sorry about the attachment being so big i couldn’t work out how to make it smaller. 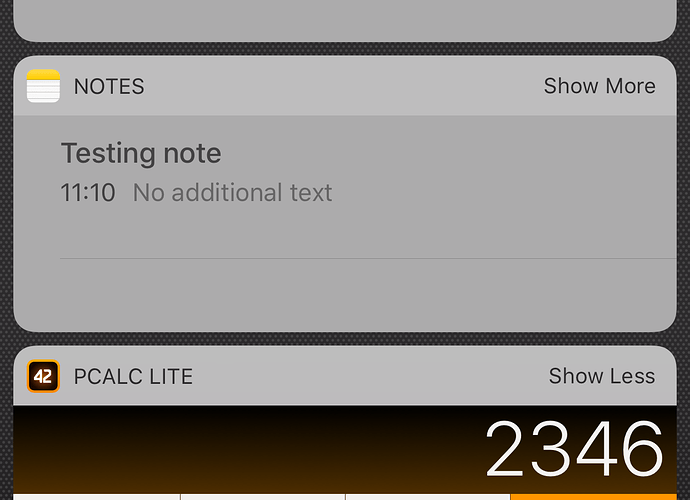 I want DTTG to be my hub for everything and a today extension would be a good way of adding notes quickly to my database.

I don’t quite understand what you mean by adding notes quickly to a database using the today widget extensions because all it does is launch the application. In the case of most calculated Apps such PCalc, yes, you can actually do calculations right from within the widget; but not so with the Drafts widget. When you select an action from the Drafts widget, it actually launches the App. In that case, I’m not sure it saves any more time than simply launching DTTG.

IMO, Split Screen is a better option for on-the-fly note taking with DTTG2 than Today widgets.

I disagree. I have just counted to add an audio note I need to launch DTTG, then navigate back to a page where the + button appears, press that , then media, then voice note…then press record. I count that as 6 steps.

If it were an option on the today screen widget…much simpler.

Another option would be having shortcuts on this screen. I often have 2 or 3 notes I am particularly looking and focusing on at any time. If I could attach the url to a shortcut in a today screen extension, that would be useful.

I am actually doing this already using launch centre pro and the url…it would be nice to do it in DTTG.

Could you give details on your LaunchCenter pipeline? Would be helpful to see the details.

I often use 1 or two notes a lot and it is useful to be able to quickly access them. For example at the moment I am annotating a rather long PDF that will take me several weeks

On the note… long press on it —> copy item link. This also applies to groups.

Then in launch centre pro add an action and paste in the url. Then if you press that action it will take you straight to the note in DTTG

Ok, I now understand the point you are making and do agree that data entry/capture can, and should improved. From my perspective, this is mainly due to the small form factor of iPhone/iPad. In other words because these devices are so small, automated and simpler ways to enter/capture/edit data are a must.

While a Today widget may or may not make sense, we’re just in the course of adding proper 3D touch support which will allow you to jump directly to the document assistant with text preselected by force-pressing on the DEVONthink To Go app icon.

I would like to second a DTTG widget. Being able to capture on the go text, voice memo and so on with a single touch of an icon (similar to what apb123 shown with the Drafts widget) would be just fantastic. This would really make DTTG a central capture hub on my iPhone and iPad.