What would be the difference to "File > Import > References from Bookends” ?

@Parisko , thank you for your reply. My last manuscript was in Scrivener, but in the end it became quite big and complex to handle. But what I do liked about it was having my research (imported) and my writing in one place. That’s why I’m thinking of adding my writing to DT, although I know - & read in this comments - it was not designed for actually writing. But I’ll think I’ll give it a try, as @suavito wrote, for one chapter. Good luck on your own manuscript!

Hi @Luminary99_0 , thanks for your reply, none of the two things keeping you from using DT for longer writing apply to my own situation

If follow you on your wish list, but maybe the other way around: first the cool editor, second the bibliographic management (as Bookends still does an excellent job).

@ruben … I’ve gone back and forth with using DT for writing instead of Scrivener, but one thing that keeps pulling me back to Scrivener is its outline plus synopsis, and scrivenings features.

Outline Plus Synopsis
If your brain works with a manual outline (like typing it out, copying, pasting, and indenting to adjust), or if you don’t need to see your structure in any place besides mentally, then DT could work well for you.

I’m particularly fond of how Scriv’s synopsis field displays in the outline (& corkboard) views. As far as I’ve been able to determine, DT can’t display the whole picture of an outline like that (unless you have a huge monitor and could add the custom metadata fields as columns).

Scrivenings Mode
I use Scrivener’s scrivenings mode to move chunks around and see where they flow in the big picture. It is so easy to right click and “split” a wall of text to move part of it to a different location. And, I’m a fan of the clean interface and how Scriv treats footnotes and comments as links, and I don’t have to read [^{#111111, Author, @234}] in the middle of my sentence.

Writing in Scrivenings mode, with the points I need to cover in the Synopsis field, and footnotes showing as grey-background links:

Research
I never use Scriv’s Research folder–to recreate my DT database in Scriv is unthinkable; instead I use the split screen on a large monitor.

One thing I do write in DT is research reports. My genealogy/family history database is 12+ GB, and I’m not willing to have that living inside Scrivener. Plus, my research notes are more logs than narrative, so I don’t need to adjust and move sections based on flow, which is where I find Scrivener to really shine.

But, like you and others have said, you’ll only know once you write in DT. Let us know what works for you and what doesn’t, eh?

Bookends really is a UX and usage ergonomy nightmare if you compare it to Papers or even Mendeley. Only advantage is that references live all in one folder which you can index from DT or other apps…

It is also Scriptable and has some very sophisticated features to customize the interface, perform advanced searches, and export data in a variety of customized formats.

Take the time to read the very thick Bookends user manual and you will see that there are a very impressive number of advanced capabilities under the hood.

Bookends really is a UX and usage ergonomy nightmare if you compare it to Papers or even Mendeley.

This is a subjective matter of taste. We have plenty of happy Bookends users. We’ve also seen many people who don’t care for Papers or Mendeley. To each his/her own.

hi @nnetsplace, thanks for your detailled comment. I’ll think it’s something with historians liking having their research closely at hand during writing, going back and fourth as easily as possible between their narrative, their research notes and the actual scanned or digitalised historical archives & documents in their database. Hence the idea of integrating DT & writing. But you pointed out towards a possible hardware solution: using split screen on a large monitor

Didn’t think of that immediately. I’m used to do everything on my macbook. Having it all integrated in one screen & one app, has obviously more logic on a smaller screen.

Scrivener is great. I don’t use it, but I really like the company behind it.

A traditional outline, at least in my inept hands, devolves into categorization instead of a story. I prefer a series of snapshots of the points in the story. That’s how the reader is going to read it, as a linear experience.

So here’s how I plan a story. I start writing ideas in Devonthink documents. I have almost no imagination and always figure I’ll have about three ideas. Often, it goes to a hundred or more. Go figure.

Those ideas are like bricks I could use to build a wall, a fancy house, or heave at detractors.

The story comes from how those elements are used and the relationships developed between them.

I’ll tag everything that relates to the story opening as Scene 1, or something like that.

The tags become my outline.

Each scene or chapter is a blank slate. If something from chapter 1 is important in chapter 12, it gets tagged in both places. When I’m rewriting chapter 1, I can add to the notes tagged in that scene. When I get to chapter 12’s rewrite, those notes from chapter one are right there for me.

So that’s how I use DT to replace Scrivener’s Research folder.

For Scrivener’s Binder, I’m happy with the navigation pane in my word processor.

Mellel has a nice touch. You can enter characters and locations, and then place “story points” in your manuscript, which are intersections of characters, a location, and a place in your story.

I know Scrivener’s Binder has some pretty cool functions, but I’m OK with more of a table of contents.

The most important thing is I need to be able to discard things from whatever I call an outline without losing them. Sometimes an idea that didn’t work in one place will work in another.

Use what works. Right now, I’m as much interested in the trick of pulling stories out of thin air as I am about writing any particular tale.

And, of course, a Big Chief tablet and a primary pencil are all that’s really needed to tell a story.

I’m a historian using DEVONthink in addition to Word, Excel, PowerPoint, Scrivener, BBEdit, and Find any File on a daily basis in my writing and teaching. Everything seems to be humming along nicely at the moment, but my workflow looks more like Jackson Pollock’s Number 5 or a Goldbergian contraption to extract work out of historians than the extreme digital minimalism I had in mind at the outset. I suppose I will eventually get around to explaining the workflow (maybe it will benefit someone, somewhere), but the gist of my comment here is to recommend cobbling together whatever works for you and avoiding any overly efficient workflow, because the goal is not efficiency or simplicity.

There have been a lot of great suggestions in this thread. I am always looking for ways to improve my workflow, and you’ve given me lots of food for thought. For any historians wandering into this thread, here are some links to useful things for historians that have and have not been mentioned.

on DevonThink and history research (I)

If you’re dropping by from the mothership, hi! I’m Rachel. I write now and then about history, academia, research tech and bookporn. Hit the RSS if you’re into any of that, I̵… 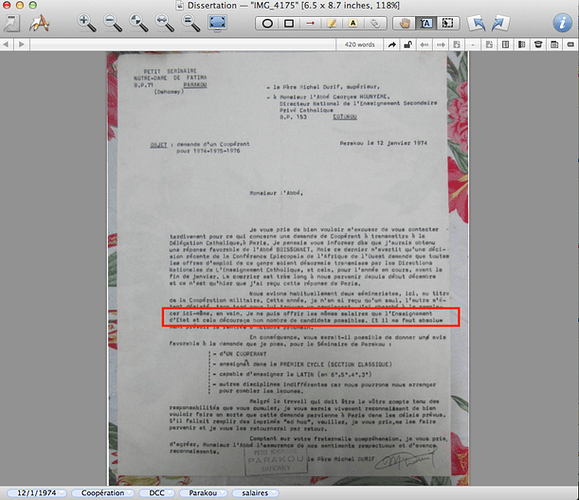 Metadata As An Analytical and Writing Tool ​ * If you would prefer to listen and look at slide decks, please click here. A roundtable I co-organized on digital tools for historians for the American...

Looking at your site i found it interesting that you would tag records one by one. I am not a historian but i am the author of a history book. As my work involves law, i use DTP3 for my law library. The source files i keep in Dropbox and index to DT. I used to tag but then i realised it would be quicker and less laborious to search for a word or phrase and use a smart folder for the results. To isolate further I might tag the results but only with a tag description that bears no obvious relationship to any of the words and phrases in the results.

I also use DT to make notes during telephone conversations via the sorter. At the end of the call I tag the note with one or more tags depending upon the subject matter and use smart folders for each tag.

I used to tag but then i realised it would be quicker and less laborious to search for a word or phrase and use a smart folder for the results.

I use an applescript to insert the internal tag
. it draws from the master tag list
. formats as [tag_tagname]
. assigns the external tag