Versioning of user created files in Devonthink. How to save correctly?

Since years I developed the habit of versioning files. Everything, word, powerpoint whatever. I open a file named filenamev1s2.ext and before editing save it as save it as filenamev1s3.ext Works fine and better than what the os offers as “older versions”. The one you are looking for is never there and you don’t have a clean cut. Besides some apps have the nasty habit of not having a save as button so you loose the older version. They save everything you type (e.g. omnioutliner) and forget about the older version. Instead of save as they have duplicate which does that, no control over location before the save. I’d rather have the old file untouched and the new data in a buffer until I decide to save it under the same name or a new one.
Since using Devonthink is place everything in Devonthink on a project basis. Doubleclick a file and it opens te right application. But when saving the file it is saved in the same directory as the original file. Which is a Devonthink managed dir. Where I am not supposed to save files on my own (I think). Anyway the files don’t show up in Devonthink when I do (which does not surprise me at all given the fact the database is a bundle of sorts). So I end up with a lot of mouseclicks saving the file to a dir outside devonthink and then importing it. That’s putting the horse behind the cart as far as I am concerned. Is there a smarter way to do this? I haven’t found it yet. (P.s. In case you wonder: I also have the habit of creating a subdir/group with the name zzArchive into which the older version go so I have a clean set of current files and an archive of older distributed communication. And I do know how time machine/older versions works, but it has the timing wrong for my use case and some implementations of older versions leave thing to be desired. And searching for an older version with the same name but with different content in timemachine is to timeconsuming. zzArchive is best for me.) Anyone ideas?

From the built-in Help > Documentation > Troubleshooting > Repairing a defective database… 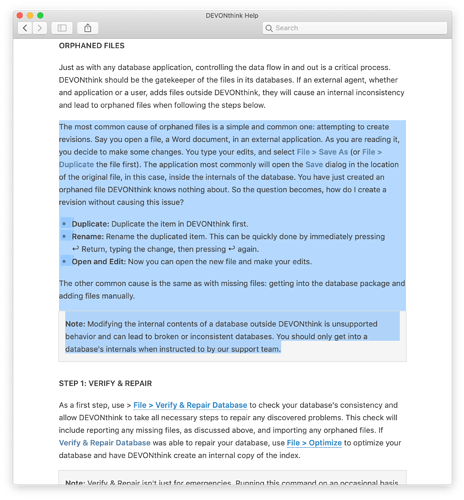 Thnx. And because of your reaction I now finally found duplicate (to here) as command-D

. It’s not in the keyboard shortcut list, not in the context menu, not in the file menu. But file=data menu in DT. File is the DT-container (datbase itself), that’s understandable.

On to the next problem: is there a way to select/seperate all the automatically generated tags from the ones I put in myself. It does generate quite some nonsense-tags automatically, especially with regard to pictures. So tagging the tags as “I don’t want to see you” would be nice (deleting wouldn’t help. It would just generate new ones.) It’s probably hidden somewhere

To version manually, you may use custom meta data. Just add fields like e.g.: “Revesion”, “Date”, “Comments”. Instead of putting it all in a filename

Is there a smarter way to do this?

I’d add another way, I use most. Especially when you decide to make a new version in the process of editing:

You are all set. Now, when you choose “Save As…” in any app, in the saving dialog you’ll see the folder “Import to DT Group” in the sidebar of the dialog. Save it there. It’ll save the file and import it to the location you choose when saving dialog closes. After import the file will be removed from this folder.

If you want to continue editing after save, close current file and reopen it from DT. Otherwise you will edit the old file, which is already in Trash folder. That’s it.

is there a way to select/seperate all the automatically generated tags from the ones I put in myself.

Not in the Tags group, no. You could select a Tags group and sort by **Date Added ** but there is no real distinction between those and tags you entered yourself.

The only places auto-tagging are found are in the Preferences > Import > Tags section and Preferences > RSS > Convert categories and hashtags to tags.

Thanks. Unchecked “add tags to images”, which is the main cullprit. I do not live in a Motel, my house and the ones of the neighbours just happen to look like a motel for an American eye.

It’s one building. Just one of the culturally biased examples.

Thank you. Will give this a try. Have been busy with other things so that is the reason for the late reaction.