Web pages not being saved to Inbox after adding Instapaper

I MAY have just placed the Instapaper in the wrong place, but puzzled.
Having just got Instapaper for the iPad, I find it’s great for adding web pages there and then being able to sync and see them in DTPO on the MacBook.
However, I’ve noticed that since I did this, web pages I save to DTPO from the MacBook go to Smart Groups, and don’t show up in the Global Inbox.
This can cause confusion if I save lots of web pages that need to be moved to different locations, or if I don’t seek them out that day, and they head off elsewhere (Today and Yesterday are all I can see there, of course).
What am I doing wrong?

Not to answer myself, just to add: when I send all the Instapaper files elsewhere and refresh, the things that should have arrived in the Inbox from Safari on the MacBook suddenly arrive in the Inbox. Weird.

Smart Groups are saved searches – they are not standard groups. It’s not possible to save something to a Smart Group. You didn’t mention how you are “[saving] to DTPO from the MacBook” – but I assume it is by using the Clip to DEVONthink in Safari. The “Instapaper” option in the clipper has been renamed “Reformat with Instapaper” (2.7.4), which indicates what that option does. The clipper is not saving documents to your Instapaper account, it is using Instapaper’s page-simplification service to reformat the web page. The reformatted web page is then saved to the group you choose in the box at the top of the Clipper. (“Inbox” in the example below.) If you see a document in a Smart Group and you want to go to its actual location, press command-R (same command as Data > Reveal).

Thanks, Korm.
I’m using Safari, and when I see a webpage I want to place inside DTPO, I click the icon at the top and select Add text to DEVONthink.
Previously, this would of course mean that when I opened DTPO, that webpage was inside the Global Inbox.
As you can see, I have the feed for Instapaper there, and anything from the iPad appears, but the webpages no longer show up there, too. 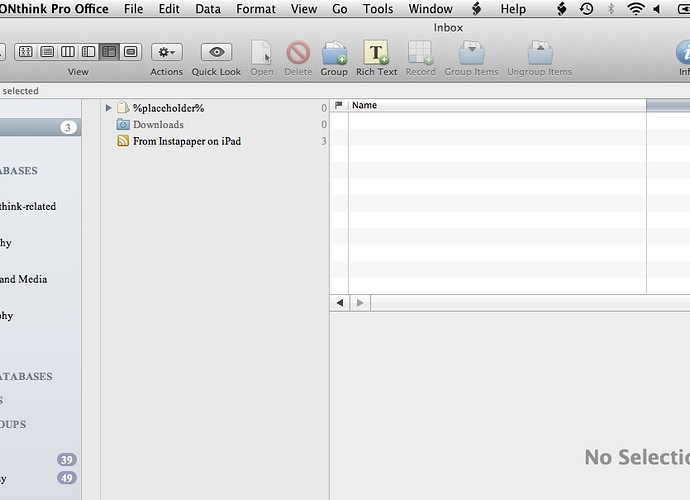 I click the icon at the top and select Add text to DEVONthink.

Sorry for being dense, but what “icon at the top”? In Safari? On a laptop? This (far right side of the image)?

Sorry, Korm, in Safari, the icon on the left

Anyone else having this problem?

Sorry, Korm, in Safari, the icon on the left

OK, now we know what steps you took. That icon is the global Scripts menu for Safari and you selecting a script that DEVONthink’s DEVONthink > Install Add Ons … > Script Menu Extras > Application Scripts installs to the user’s library at ~/Library/Scripts/Applications/Safari/Add text to DEVONthink.scpt. The script access the text of a webpage (without images or markups) and stores that text to the location configured here (DEVONthink > Preferences > Import > Destination):

I read the the script just now and see that it has nothing to do with Instapaper. If it was formerly storing web page text to a group in the Global Inbox that happened to be named “Instapaper”, that was random. See Help for an explanation of what those options shown in the screen grab, above, do.

You may navigate to the location in the library that I listed above and read the script, if you wish.

I have those preferences set to Global Inbox, so that any webpage I save ends up in there.
Since adding the RSS feed for Instapaper, those webpages no longer appear in the Global Inbox!

It was previously saving them to Global Inbox. Not to any folder called Instaper. There was no such folder. Now there is an RSS feed for Instapaper, webpages don’t show up but can be located in Smart Group folder Today or Unread

And now, if I save that webpage with Clip To Devonthink - to Global Inbox - the same thing. It no longer appears there, and I have to look in Smart Group: Today, to find it.

And now, if I save that webpage with Clip To Devonthink - to Global Inbox - the same thing. It no longer appears there, and I have to look in Smart Group: Today, to find it.

Something cannot appear in a Smart Group unless it is in another group. So, clip a page using the script – then look in the Today Smart Group, press command-R to reveal its actual location. That is the information needed to troubleshoot.

And I suggest deleting the Instapaper RSS for now, empty the trash, then do a Verify & Repair on the Global Inbox. Might as well eliminate any side effects.

Korm, thanks for your help and patience, as always.
This is the damnedest thing, but it seems that by going to preferences, changing things and then saving them back as they were, it has given DTPO a “kick up the ass”, to be non-technical, and now things I save from Safari do once again appear in the Global Inbox.
I’l be interested to see if this continues after the next refresh and addition of new Instapaper pages, but it is working at the moment.
If it reverts again to this problem, I shall delete the RSS feed, etc, as you suggest.

Ha! Sadly, as soon as I click on the feed to see the Instapaper files, the things do indeed disappear from the Global Inbox.
Thing is, am I the only one this is happening to?
Anyone else using an RSS feed for Instapaper, and not getting this odd quirk?

Well, I’m stumped. I added an Instapaper feed to the Global Inbox and attempted to reproduce the situation as far I understand it. No luck. Everything works ok over here, nothing is mistakenly stored in the Instapaper rss group in the Inbox.

I suspect that the disappearing Instapaper rss files are in the trash. DEVONthink has a preference tab for rss feeds and one of the options is to have DEVONthink automatically remove (delete) the articles after a set period of time.