Not sure this is a DT bug.

Do the following: in calendar double-click an appointment, opening the info-window for the appointment. Drag a pdf from DT global inbox and drop it in that window. Expected behaviour: the pdf will be dropped into the window and attached to the appointment. Actual behaviour: after a delay, a series of unrelated names, phone numbers and seemingly random numbers (see screenshot) appear. 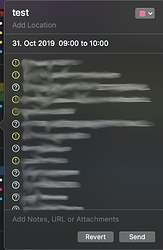 If in DT I right-click the pdf and select “show in finder” and then drop the same pdf directly from the finder, things work as expected.

Are they actually unrelated names?

Yes, in every sense - other than the random numbers, which I can’t yet place, the data are entries from my address book which bear no relation to the document or to one another (other than that each entry is correct in its own right, i.e. jim neumann rather than jim grunenberg)

Are these names/numbers part of the PDF?

FWIW, I just tested this and saw the same. Tried it with 2 different pdfs - two different lists of people, both lists from my Address Book.
Tried it in Fantastical - it created a file:// url to the pdf in the Finder

That’s definitely weird as DEVONthink provides only its own data via drag & drop and doesn’t access/use the addressbook at all.

I got the names of some authors in the PDF as Invitees, which was odd but made sense.

@BLUEFROG you are right, the names and numbers are being added as invitees; the only phone number which is being added is actually lifted from the pdf (as such I was mistaken earlier when I said all data was unrelated to the pdf) - however, the country dialing code has been added (which was why I didn’t initially find it when I searched the pdf); the names are completely unrelated. At least one of the apparently random strings of number contains in it a telephone number lifted from the pdf (where it is formatted, but is lifted unformatted), the rest of the string appears random. The other strings still appear completely random to me. The document is not attached.

So, in some way the data passed from DT to calendar is being interpreted as invitees rather than as a pdf to be attached; presumably calendar then performs its own magic to change certain strings into people, phone numbers or whatever.

Just incase anybody had forgotten it