What am I doing wrong with blogs?

I have a number of feeds in DTP Office but one is giving me problems when I try to open it. The feed is from the UK National Archives and this is the url:

The trouble is that although this will find the individual blogs when I click on the link to open them they will not load in my web browser, Safari, it mostly loads half way and then stops but sometimes loads the whole way but nothing appears. I attach a screenshot to show you what I mean. As you can see there are three images here, the top is DTP, the middle one is the summary that appears when I open the blog, and the bottom is what happens in Safari. Any ideas what I am doing wrong or what is going on would be a greatly appreciated. 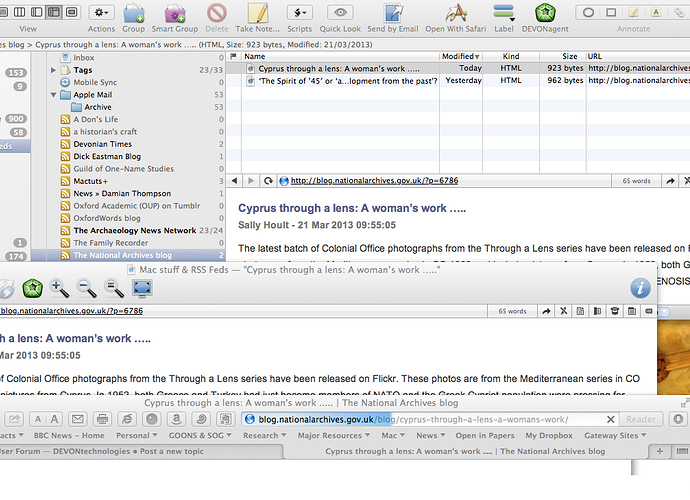 I tried your link, and see the same problem in Safari. OTOH, the links open without problem in Chrome and Firefox. So, I’m going to assume you’re using Safari 6.x. Over here, since 6.x came out, I’ve seen slow or non-loading URLs – a problem I’ve not been able to find complete resolution on. Apple & other support forums have lots of opinions about the cause, but I haven’t yet found someone with a full and lasting solution.

IMO, best thing for non-loading URLs in Safari is to quit Safari. Use another browser.

It’s not caused by DEVONthink, AFAICT.

As usual Korm you come up with the goods! Thanks for this I shall download Firefox but is there a way to make Firefox the default browser for DTP but keep Safari as my main default browser? I often use the ‘Add PDF document to DEVONthink’ facility in Safari so do not want to compromise that. Thanks again for your help.

I don’t think there’s a simple way to associate DEVONthink links with Firefox, but leave Safari as your default system browser. (A script could be written for a DEVONthink toolbar item – I don’t like scripting Firefox because it breaks a lot).

You could right click links or feed items and use “Open With…” to select Firefox from the list of apps.