What am I missing from WikiLinks?

This feature seems to have been out for a long time, and I want to use DEVONthink to Wikinotes, but I found that it is not like this:

Have you enabled WikiLinks in DT preferences?

If you have enabled the relevant preferences it should work (in markdown, rich text and plain text documents) as described in the user guide: 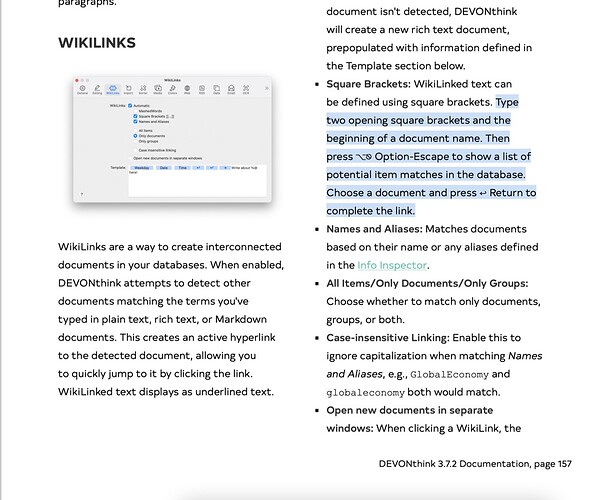 DeepL translation of that part of the user guide:

Yes, I turned on the preference of WikiLinks, but it seems to be mandatory automatic linking. As shown in the picture, I typed in Note1, purely in Note2 documents. I don’t know the difference between [[Note2]] and input Note2 directly , They seem to display the same effect in the preview, of course, I may not need it to force automatic linking. 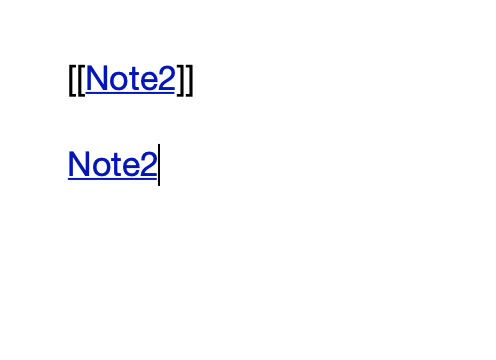 Are you using markdown, plain text or rich text?

When you start typing after the opening square brackets, at least in markdown (the only one I have tested) you should be offered a list of matching records in DT. Like you, if I simply type Note in the brackets I see it underlined as a link in edit mode but it does not show as a link in preview mode (because, of course, there is no such record called simply Note in DT, in my case).

markdown, Turn on automatic linking, and if you type “[[” or not, it will link to an existing document. If it does not exist, “[[” only plays a role in creating a new document. This logical method makes me feel friction.

You have Names and Aliases enabled in Preferences > WikiLinks > WikiLinks. Disable it and the square brackets will be required.

This is very useful, but [[Using the Chinese input method to input Chinese has a problem, the following is one of my screen recordings.

I hope to check the Chinese input problem.

That’s not yet supported.