What are the causes of sync troubles?

I’m staring at the same file in DTG on three different devices. Each device shows a different state of the file. None of the devices think they have any updates to download—believe me, I’ve pulled down many times at this point waiting for some magical sync faery to relieve my anguish. I can’t even check to see if the file has been properly synced without re-opening the file in the app (is there no sync log anywhere?).

I have arbitrarily verified the database—and thoroughly so—while casting about trying to get a quick fix for this.

I really don’t want to clean the database on multiple devices for a 1 KB Markdown file to sync.

My bigger concern is that this happens at all, and that I have no ability to grasp why it happens. Now that I’m looking, each device thinks there’s a different number of tags and files contained within the same database. Obviously something bigger has gone wrong.

Worse, though, this isn’t the first time this has happened. At least twice in the past 6-8 months I remember spending hours trying to investigate the cause of discrepancies in syncing. In the end of each of these periods of frustration I’ve simply given up and wiped the app and re-synced—but since I’m trying to use DEVONthink’s tools to help manage three databases (4, 7, and 16 gb in size) this is not a sustainable method of troubleshooting.

So what causes these problems? Am I trying to manage too much data in these databases? Should I switch from Dropbox syncing to iCloud or something else?

I feel helpless to manage these issues myself without wiping everything. It would be tremendously helpful to have a sync log, or some other way to get some transparency about what the app thinks it sees in the sync store to download and what it’s not seeing.

Sorry, this post is rambling, but I’m spent after getting completely distracted from what I was trying to do by attempting to fix this issue over the past couple hours. ;|

Fun: I cleaned one of the databases on one of the iOS devices in order to do a fresh sync (yay) with iCloud. The database was showing as local on both Locations menus, but turning either location “on” yielded a warning message that said something about how the database wasn’t finished downloading yet so to upload it would cause errors (???). There was no indication that anything was being downloaded (and there shouldn’t have been, because they were both local copies).

I couldn’t find an intuitive way to get past the warning, so I figured I would delete the local iOS database and then turn “on” the database in the iCloud location menu.

After swiping randomly at the interface I eventually found what seemed to be the proper way of doing this—by swiping left on the database itself, hitting delete, and acknowledging the terrifying warning message.

I went back to the iCloud Location menu to wait for the deletion and, joy, the subtitle of the database was “Deleting…”. I experienced a furious panic and went to the Mac to immediately create a backup of the key folders on that database (I’m using indexing).

Turns out that this wasn’t an accurate subtitle. The database was local, so it wasn’t deleting the remote versions. But it sure looked like it was trying…

(Still not sure if this sync resolved my immediate issues, but I wanted to chronicle the UX woes while I waited for the sync to happen…)

Turns out that this wasn’t an accurate subtitle.

Why would deleting a local database or sync data delete a database on a remote machine??
Also, the warning message when cleaning a sync location clearly state the name of the sync location being cleaned.

turning either location “on” yielded a warning message that said something about how the database wasn’t finished downloading yet so to upload it would cause errors (???).

Correct, because a shallow sync doesn’t have contents to upload.

There was no indication that anything was being downloaded (and there shouldn’t have been, because they were both local copies)

That is an incorrect assumption. A fresh sync has an upload and download phase, ensuring data parity between a device and a sync location.

Why would deleting a local database or sync data delete a database on a remote machine??

Great question. So then why did deleting my “Forge” database via my Dropbox sync lead to this message: 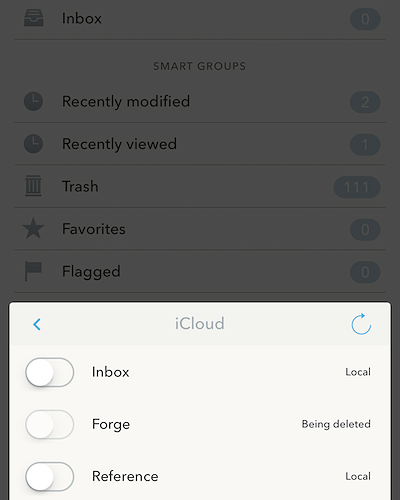 I first disconnected the remote database in DEVONthink To Go, then swiped left on the database and deleted it. The UX panic comes from the fact that DEVONthink To Go suggested that it was deleting Forge on my iCloud sync, as per the screenshot. Sure, my intuition held that it shouldn’t be possible, but it’s still poor communication to suggest that it’s happening at all.

We’re getting beyond the real issue here, though: what causes these sync problems in the first place? How can we—as users—get a better handle on what’s happening with our syncs? Why are these databases constantly going out of sync, and why can’t I intervene to get the databases to align again without having to wipe everything and restart?

Just for this one sync problem, I’ve spent 2-3 hours troubleshooting, I’ve wiped and re-downloaded 8 gb of databases, and I have no idea if I’m going to need to do this again in a week or a few months.

So then why did deleting my “Forge” database via my Dropbox sync lead to this message:

Because you are deleting the local Forge database and it was in the process of deleting it and cleaning up.

what causes these sync problems in the first place?

This is impossible to answer fully, especially with a remote sync location. Support tickets sent via the appropriate mechanism are the best road to take.

Why are these databases constantly going out of sync

You are describing abnormal behavior if your databases are “constantly going out of sync”.

Is it possible to answer partially?

I’m looking for any kind of guidance on what behaviours lead to the misalignment that I’ve repeatedly witnessed. I understand that sync services at DEVONthink’s scale are challenging and that the software is complicated. There must be a set of best practices or something that we can compile to minimize the amount of trouble we’re having without having to rely on support.

The tool loses its value if it doesn’t work in the moment I need it. It loses even more value if I can’t self-maintain—if I have to wait on someone else to solve these issues for me. One of the things I value about this forum is that some solutions to the issues I’ve come across are already laid out here rather than hidden behind tech support.

Is it possible to answer partially?

Again, this is not a normal situation, but could be attributed to any item(s) in the small list I provided above.

You can self-maintain with the method you described: Clean and resync. There is nothing you can do with the sync store or data. You can also verify the sync location beforehand. And yes, the clean and resync method is a more aggressive option than you’d like, but that is one option you can exercise. It’s also a good time to open a support ticket.

What is the difference between a support ticket and a forum post?

The same difference as discussing your particular medical issues with your doctor, versus regaling your cronies with medical ailment stories or reading WebMD posts. You need advice based on your specific issue.

I am another frustrated user. I cannot sync my database with my DTG in the ipad. I’ve spent several hours on this, following the instructions, trying different methods. From the discussion above it seems that a deep level of technical knowledge is necessary to grasp the possible problems.

@ppiccato: You should start a Support Ticket.