When to best trigger smart rule for OCR & move

I’ve written a smart rule script that OCRs PDFs if necessary, renames them according to some standard, and moves them to appropriate database&groups depending on their kind (think different bank accounts, invoices etc.).

This smart rule should process the global inbox when a new PDF is imported there, trivially. But: Occasionally I import stuff in the global inbox on my iPhone or iPad. So I thought, I should have the smart rule triggered by “after synchronisation”, too.

But that results in about a new run of it every five seconds although I’ve set the sync interval to automatic on my Mac and nothing has been added to the inbox at all.

To summarize: What kind of trigger should I select to make sure that documents arriving in my inbox on the Mac either by importing them there or by being sync’ed from another location are passed through the smart rule and the rule is not running more often then necessary? (I know, I could simply set it to “runs once every day” or something, but that’s not very elegant, is it?).

But that results in about a new run of it every five seconds although I’ve set the sync interval to automatic on my Mac and nothing has been added to the inbox at all.

Currently each sync of any database can trigger this. How does your current smart rule look like?

Well, there was no change in any database

(looks like nothing at all because all the work is done in the script, of course

Well, there was no change in any database

Even in that case the automatic sync checks every then and now for changes.

(looks like nothing at all because all the work is done in the script, of course

The script would be useful of course then

I sent you the script by PM. Also, there are some PDF records in the global inbox that are not moved away from the script – they should just remain there as they are. This is intentional. I’m wondering if that might be triggering the execution.

And here’s what I see in the protocol window: 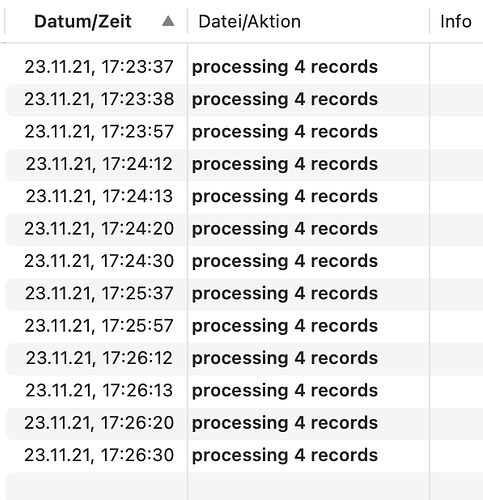 after I added a logMessage call to my internal script. It doesn’t look very systematic to me: sometimes the script is run twice in two seconds, sometimes 20 seconds are passing between execution.

Some more facts: The execution coincides with DT contacting my WebDAV server which is handling sync. Exact same times for WebDAV traffic and the messages in DT’s protocol. And the messages do not happen when I turn sync off.

So apparently “after sync” means something like “when DT contacted the sync server”, at least in the case of WebDAV. But there’s not really any sense in executing a smart rule “after sync” when nothing has been synchronized, is there? And there was no change at all in my case, i.e. DT apparently just wanted to make sure that – well, what? the server is still there? it is still there and there’s nothing to do? I don’t know.

This is intentional. I’m wondering if that might be triggering the execution.

the conditions of the rule should exclude items having this flag, label or tag

Yep, that’s what I did. It still feels clumsy though. In my mind, after sync should trigger only if something happened during sync. Preferably a file was added or modified.

Hi chrillek, I’m a beginner with DevoThink and also not so familiar with Apple Script and am currently trying to setup a similar automation. Could you please share that script for the automation as a kind of template for my attempts?

Using a single smart rule instead of Hazel (maybe) Tips

Some people (me included) use a naming conventions for their files and put them in certain goups depending on sender and/or content. I’m doing that for bank statements, some of the regularly arriving invoices and income statements. In DT, you’d need one smart rule per target group, since it’s not possible to move a record to a group depending on some criteria. So if you have 5 bank accounts and two companies regularly sending you invoices, you’d need seven separate rules. Which is not good, bec…