Where is the annotation template?

This must be a dumb question, but in DT3, is there a way to modify the template that is used for creating annotations from the annotations inspector when you use the downarrow New from template command? I found the master RTF file in the application directory (/Applications/DEVONthink 3.app/Contents/Resources/English.lproj/Annotation.rtf) but it seems likely that DT3 would provide a way to define a user-editable version (perhaps in the user template directory?). I cannot find one there now, but I did make other changes to the template directory and maybe I screwed up. Does anyone know if a user version of the annotation template can be created, and if so, what the name of the file needs to be so that DT3 uses it?

but it seems likely that DT3 would provide a way to define a user-editable version (perhaps in the user template directory?)

You can always copy the old Annotation template from DEVONthink 2.x’s resources.

Thanks for your reply, as always. I’m confused about this “new annotation file” function. Right now I’m using the Annotations & Reminders inspector, and here’s what I see when I click the downarrow there: 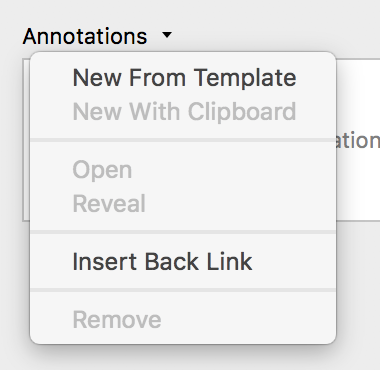 It doesn’t seem to have an option that references a file (other than the template, which is what I was trying to get at with my original question). Again, my apologies for being stupid here, but if you could just nudge me in the right direction to find the feature you’re talking about, I’ll be on my way…

It is a little confusing. The Help for Annotation & Reminders, under “Annotations” says

New from Template: Click the down arrow and choose New from Template . This will create an annotation file, using the same template as the one from the Data meu, but the file will reside in an Annotations group at the root of the database.

but doesn’t explain what the “one from the ‘Data’ menu” is. Out of the box, there is no “annotation” template there.

Hmm. I tried to copy the Annotation.rtf file into the template directory, and restarted DT3, so that the Data menu’s New from Template list included Annotation. But then using the Annotation & Reminders inspector facility to create an annotation from template did not end up using that template.

I’ve solved the problem for now by simply replacing the template in the DT3 application resources directory. I know it’ll get overwritten when the next update comes along and that’s okay until a better solution comes along.

Thanks again for your replies!

But then using the Annotation & Reminders inspector facility to create an annotation from template did not end up using that template.

@mhucka: That is correct. That will not work that way. The dropdown uses the internal item (which I do not suggest you edit manually).

And it’s not merely the RTF file. The old one was a template. Try this…

@korm: The documentation is incorrect on this point and will be modified.

Ah, I think I understand now. If I add the old-style Annotation templatescript as indicated by @BLUEFROG (and kindly provided for downloading above), it works if I invoke it from DT3’s Data ➜ New from Template menu. Doing so creates an annotation on a document, and the annotation even appears in the Annotations & Reminders inspector. However, if I use the downarrow in the Annotations & Reminders inspector, this annotation template is not used (and its associated template script not used either, presumably).

This is fine from my perspective; in fact, being able to create a template and associated script this way is even preferrable because it provides more control over the way the Annotation is created and the keyboard shortcut assigned to it.

I actually never used this facility in DT2, and thought that the Annotation & Reminders feature for annotations was a new thing in DT3

Thank you for the (for me) clarification, @mhucka.

I’d suggest for @cgrunenberg etc. that relying mainly on some inbuilt template buried in the .app package is not as useful as being able to choose an annotation template on the fly. E.g., if the Annotations drop-down menu allowed one to pick a template somehow.

I actually never used this facility in DT2, and thought that the Annotation & Reminders feature for annotations was a new thing in DT3