The purpose is to open Drafts displaying that document. I want to be able to move back and forth between numerous documents as well as moving to drafts where I edit text

You tried to make a link… where? What kind of document?

A link in a Markdown document works as expected… 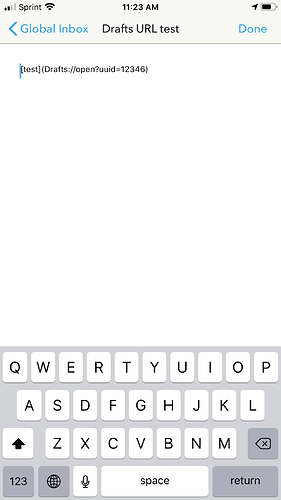 As does a Bookmark… 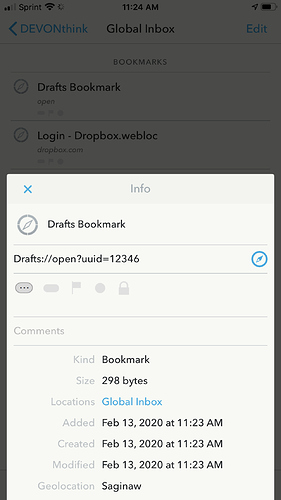 your reply using a Markdown new document worked. Thank you. Why are x-devthink-item links clickable in normal text files, but the links I tried were not?

I am using DDTG (most recent version) on my iPad Pro (fully updated)
*I just tried this on a new markdown document and it worked. The first document was a text document. Why are x-devonthink links clickable but not the one I tried?

Plain text doesn’t support live links other than our own URL scheme in DEVONthink To Go. Development would have to assess adding support for detecting other URL schemes in plain text.

Thank you,
For your quick replies
For your solution to my stated problem.

Sorry to necro this old topic, but is there any way possible to create new link in PDF document with DTTG with the link value of DEVONthink’s x-callback-url?

If I paste x-url in link creation, it won’t let me press Done. (I can provide screencast if necessary)

The framework we use for PDFs in DEVONthink To Go doesn’t accept URL schemes.

while a little disappointed, but I really appreciate the honest and concise answer. thanks.

You’re welcome.
And that would be up to the PDF framework developer to decide.