A script to automate reminders

I know there is a script to manually send a note to reminders but is there anything that will totally automate the process meaning If I create a note in a particular group or assign a particular tag or label to it?

Embed the following script in a smart rule which triggers on moving to a specific group, marking with a label or whatever.

Adjust the time as required - currently it is set to remind you 30*6 days from the creation date of the document.

(I may have misunderstood you - this sets a reminder in DT - was that what you wanted, or did you want a reminder in the Reminders App?)

I did mean to send to the Apple reminders app. So when I set a note or any nite within a group it automagically creates a reminder in Apple.

In which case my response was useless, sorry about that

I’m just looking at the script for sending to Reminders app. Obviously you could trigger that script with a smart rule - is the only problem that the script is requiring input from you? If I’m reading it correctly, the script asks you to choose a Reminder list and the due date, is that right? You could modify the script to automate both those things easily, I think. Is that what’s required?

(quick and dirty: the lines which set a variable using “choose from list” could simply be replaced so as to set the variable to a predefined choice; that would obviate some of the code, but leaving it in wouldn’t do much harm)

In iOS you could create a note in DTTG using a URL-scheme with Shortcuts and simultaneously/automatically create a new reminder in the Reminder app, but I’m not sure whether those can be ported to macOS.

I don’t think your script is useless. I’ll use it.

I was just tying to completely automate the process of entering a note into my tasks folder and having it show up on my calendar without me possibly forgetting to do anything else.

Also it would be nice to be able to add tasks on my phone and when they sync to Mac automate the reminders function as well. But I don’t know if that can happen.

Doing it on the iPad or iPhone is really the ultimate plan. I use an application called Daylite to display all my tasks and events. But I like to enter my tasks into dt3 or dttg since I am able to store much more information with the task. But I don’t want to lose track of them.

Currently I enter all my tasks into a group simply called tasks.

So you would like a reminder in the Reminders app for every task which is placed in the group called tasks? Does the reminder need a due date?

This script will add a reminder to the Reminders app for one week from now, at 08:00. If you put it in an appropriate smart rule it should do what you want. If it goes out and makes coffee and boils an egg, however, I cannot be held responsible (but it works here for me).

(as I said, somewhat quick and dirty, there are a few more lines of code which could be cleaned up)

It would be possible to add a failsafe to this: if you were to set up custom metadata (e.g. called “RemSet”), then the script could e.g. set RemSet to 1 and not set up another reminder for that document so long as that “1” remains. That would reduce the risk of setting multiple reminders for one document (that’s especially important if you can’t narrow down your smart rule suitably)

I appreciate the work but I don’ think I have the knowledge to get this working. I pasted it into the embedded edit script area but I don’t know if it should go within the existing script or replace it.
And when I paste it in it doesn’t color code. I don’t want to take up your time with this. But I see I am missing some basic knowledge of scripting in DT3.

Turns out nor do I

the embedded script can’t handle the date command (oh, yes, I remember). I’ve “cleaned up” and simplified the script now and attached it here zipped. You need to unzip it, and then add the script file to DEVONthink’s (DT) smart menu script folder like so: in DT click on the script icon in the menu (it’s on the left of the Help menu); select “Open Scripts Folder”; it contains a folder “Smart Rules”; drop the script in the folder “Smart Rules”.

Now when you set up a smart rule and as the action select an external script, you will be able to select our new script called “Auto-Add as Reminder” from the dropdown list.
Whether or not you use both the internal and external reminders is up to you of course. Your smart rule can run both scripts.

I have actually tried all those steps now, and it works for me. Sorry for not having tried the previous script embedded, then I would have noticed myself that it wasn’t going to work without modification.

As I said, your rule needs to make sure it only runs on each file once (otherwise you’ll have lots of reminders…); if you set up a custom metadata (DT preferences/Data; I’ve called mine “IsReminderSet”), then you could set your rule to look like this: 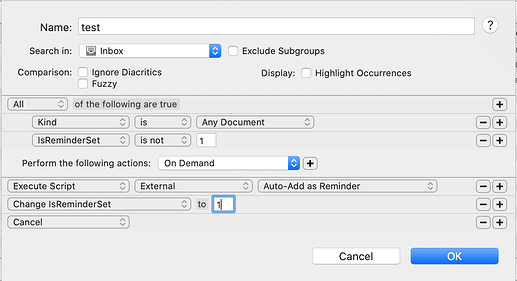 Obviously, you might want to change on which group the smart rule acts. You might want it to trigger “After Synchronisation” if you are adding items to the group with DTTG on iOS. As a one-off, you may also want to set the “IsReminderSet” to 1 with a smart rule on all files already in the folder which is acted on by the smart rule, just so as you don’t get reminders for that which is already in there today.

If you open the script, you can change both the point in time of the reminder (currently one week on the future at 08:00) and the reminder list - both parts of the script are marked with a comment. Note: DT caches the scripts on startup, so any changes you make to the script aren’t reflected until you restart DT.

Try it out - again, I’m not going to be responsible for the script taking meth and playing loud music, but it’s not done any harm here

Let me know if you run into any problems.

And thanks to all those who have helped me code these past few days - the great thing about knowledge is we all have differing degrees and selections of it, and can share and help out.

As homework, you could try and integrate writing to metadata into the script - that way the metadata bit would only be set if the script is actually successful - currently, if it failed with an error, then the bit would still be set, and the script wouldn’t run on that file again (which in practice probably actually won’t be a problem).

I’m aware I’m interweaving with the AppleScript approach of @blanc, but nevertheless I have the idea you might be putting the cart before the horse somehow.

It’s always difficult to understand someone’s workflow without actually seeing it, but coukd you explain what happens in what order? You use Daylight, Reminders and DTTG, and sync the latter to DT, correct?

So you’ve just been triggered/asked to do something, but you don’t want or cannot do if right now. So you set a reminder somewhere and that apparently references information you can store in DT/DTTG but not in Reminders.

How do you set the reminder currently?

I completely agree with your sentiment - always ask the workflow first, and then offer support for that workflow. I’m just enjoying coding to be honest - and the original question included the words “script” and “automate”

Well, I’m pretty impressed with the speed at which you accomplished that to be honest

I also perfectly understand the need to quickly reference some information when reviewing or performing a task as @Johncesta mentions , but I use a DT(TG) UUID to do that. A UUID is portable between DTTG and DT, as are the tasks in Reminders if you sync them over iCloud.

In short I use one app to do task management (although I personally don’t use Reminders) and one app to store/reference information, and have them reference each other with a UUID or URL-scheme where necessary. That puts most things in one spot and declutters my workflow considerably.

I lose interest in things if they don’t move quickly enough (making me useless at some tasks, I must admit)

It took me an hour yesterday to figure out how to send a document path to another application in one of my scripts, so I’m still struggling with the basics, really.

The script for John adds a link (x-devonthink-item) to the document in the reminder, so in that sense it’s similar to what you are doing, if I understand you correctly. That link is also displayed in Reminders in iOS, but is not a valid link there, unfortunately. What is lacking is a link back from the document to the reminder. Anyhow, it’s nice to see how ppl are doing things, picking up ideas here and there and then shaping things into a personal ideal - which is why it’s great if a bunch of ppl chip in on threads like this one (I hope @Johncesta agrees :D)

That link is also displayed in Reminders in iOS, but is not a valid link there

I just pasted x-devonthink-item://UUID in Reminders in iOS (the URL field) and that opens the corresponding document in DTTG.

Wouldn’t it be possible to search for that reminder with a Shortcut that is passed the DTTG UUID? That reminder can be opened with some URL-scheme x-apple-reminderkit://, but it requires the UUID of the reminder to open it. I’ve never used it, so I’m not sure how one obtains that.

But if one uses Reminders or any other app to handle the task status, I don’t immediately see a need for DTTG to open the reminder. Hence the question what specific steps are taken in @Johncesta‘s workflow.

I just pasted x-devonthink-item://UUID in Reminders in iOS (the URL field) and that opens the corresponding document in DTTG.

If I can use reminders than I can sync my reminders to almost any other calendar or todo application or PIM on the Mac that I like.

Yea, one needs to copy the url an move it to the URL field.