Am in state of confusion: images missing in DT RTF document after opening with ext editor, but present if copy paste

Hello,
I am new to DevonThink Pro 3.
I went through the following steps:
Data → New → Rich Text to create a new note.
I then opened the note with Data → open with → Nisus Writer Pro → wrote a document containing both text and images → Save in Nisus → close → return to DT. The text is there but the images are missing. If I reopen the doc Data → open with → Nisus Writer Pro , the images are there.
If I copy paste the contents of the Nisus RTF document and paste into a new DT RTF note, I can see the images.
thank you very much

Do you see the images if you open the original document in TextEdit? Or perhaps repeat your same process, and instead use TextEdit as the external editor to see if the issue might be with Nisus.

If I go through the same procedure (text + images) with textedit, the same things happen: text + images in textedit but text only in DT.
2 possibilities come to mind (but I know nothing)

WHY DOES DEVONTHINK NOT DISPLAY MY DOCUMENT CORRECTLY?
DEVONthink uses Apple’s Quick Look technology to display previews of many file formats. If a document is not properly displayed, especially if it is a proprietary file format, it may be you don’t have a Quick Look plugin installed for this file type or the application that created the file is not installed on your Mac (and supports Quick Look). Control-click the file and choose Show In Finder to reveal it. With the file selected in the Finder, press the spacebar to open a Quick Look window to determine if the item is viewable.

Not all of these picture types are supported in all RTF readers. When a RTF document is opened in software that does not support the picture type of an inserted picture, such picture is not displayed at all.

Again: If you depend on the image to be shown at all times in your document, you might need another tool. If you just need it to be available at presentation time, Markdown should be ok. Or may be also RTF? I just tried it out: created a new RTF document in DT and added an image (copy & paste from the file system). No problem at all (see screenshot below). So maybe the problem is not DT but the image format(s) you’re using? PNG apparently works ok. 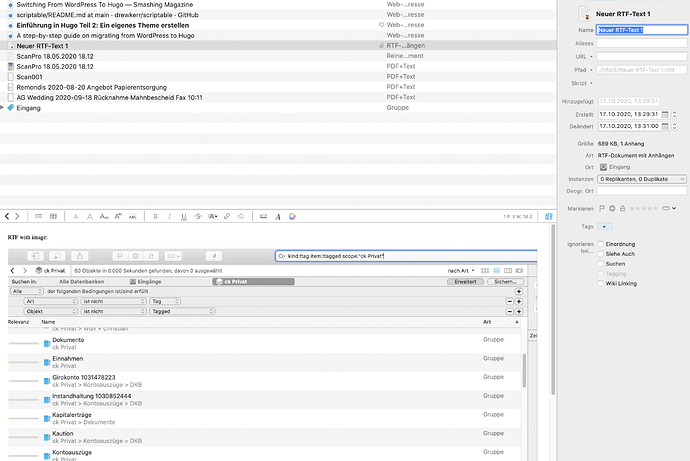 I reproduced the issue reported by the OP. It appears that if an .rtf document is opened in Nisus or TextEdit, and then in one of those editors an image is added – which triggers conversion to .rtfd, then things get confusing in DEVONthink. If the file is saved from one of those editors, the .rtfd ends up as a orphaned file in the database. Steps are needed to V&R the database, and move the “found” orphan back into the right group.

Best thing to do is to let the .rtf to .rtfd conversion occur in DEVONthink’s internal editor before opening the document in Nisus for editing. Just create and .rtf, plug in some image (which will trigger the conversion to .rtfd) then open in Nisus.

OR: just create the document in Nisus and edit it there for a while, then move it into DEVONthink.

thank you very much for your detailed answer. I think that @korm is on the right track

A very smart answer: thank you for giving it some thought.

Best thing to do is to let the .rtf to .rtfd conversion occur in DEVONthink’s internal editor before opening the document in Nisus for editing. Just create and .rtf, plug in some image (which will trigger the conversion to .rtfd) then open in Nisus.

if I data → new RTF in DT → write a line of text → paste image: you are right ! DT automatically converts to RTFD which are great. Unfortunately if I data → open with → Nisus Writer Pro: the page is blank in Nisus Writer Pro which is crazy.

OR: just create the document in Nisus and edit it there for a while, then move it into DEVONthink.

I will do more testing

thanks again VERY much

So I found the solution, and it is all thanks to you.

I can’t thank you enough.

I was confused by the fact that when images are added DT automatically converts RTF → RTFD as you explain in your post.

My solution which would not have happened without your help:

2- DT > new RTF document > add very small insignificant image) > DT will automatically convert to RTFD > make a template out of it. Now I can open it Nisus > Save and the DT document updates perfectly including images.

You are right about quick look. There is an issue with quick looking Nisus Documents.
I did however find a solution as per below.
Thank you for your time, help and multiple posts.

Thanks for the investigative work and posting a follow-up. This should be helpful to any other Nisus users who may run into this situation.

make a template out of it

Good point and makes sense in a case where you have a particularly “odd” external editor like Nisus, which handles RTF(D) quite well but in a very opinionated manner.

just 2 comments and I will leave you in peace:

1- I did not choose Nisus Writer Pro (NWP) by chance. I did some research and found that it is the best rated Mac RTF and RTFD Word Processor for Mac. Reviews are all 4.5 to 5 stars. It is superb and I much prefer it to MS Word, Google Docs and Pages. In the case of DT, using Nisus Writer Pro as an external editor as described above gives me the best of both worlds: the power of the DT Database and the ability to write DT embedded complicated technical documents without having to create a file with Nisus Writer Pro, then import in DT etc. I even wonder if DT would eventually like to have a more formal association with Nisus Writer Pro as an external editor (I am not “promoting” them - I don’t know them and I am not in business)

both are in the app store

just 2 comments and I will leave you in peace:

No worries. You’re free to express your opinions and ideas here.

I’m glad you’ve found Nisus suits you. That being said, it does have proprietary methods, so bear that in mind (not just with DEVONthink, but potentially if sharing files).

My solution which would not have happened without your help:

2- DT > new RTF document > add very small insignificant image) > DT will automatically convert to RTFD > make a template out of it. Now I can open it Nisus > Save and the DT document updates perfectly including images.

This will not prevent you from accidentally destroying your RTF(D)s.

If you edit an RTF(D) in Nisus Writer and afterwards edit or save it in any other app all Nisus specific stuff will be destroyed.

Setting the default format to Nisus Compressed Rich Text and also using this as a template in DEVONthink is the only safe way, I think.

See Save usage of Nisus Writer RTFs in DEVONthink.

Very interesting !
Does compressed Rich Text support images, just like RTFD ?
thank you very much. I would have made a huge mistake

Yes, but you won’t see them in DEVONthink, only in Nisus Writer.

then it is not useful.

How about using the method I detailed above. In case of a mishap, does DevonThink Pro 3 support any kind of document versioning ?

does DevonThink Pro 3 support any kind of document versioning

How about using the method I detailed above. In case of a mishap, does DevonThink Pro 3 support any kind of document versioning ?

The problem with mishaps is that they are not recognized immediately, at least over here.

In case of destroying a Nisus document you won’t know about it until you open the document in Nisus Writer again.