Bonjour has stopped syncing the Inbox. Other Databases still fine

I have been using Bonjour (only) syncing for several months with no problem.

I have one server Mac, a client Mac, and an iPad and iPhone as DTTG Clients.

Today I noticed that on the client Mac the Global inbox is not syncing. My other four databases are still syncing fine.

The iPhone and iPad are syncing with the server Mac fine, (Global Inbox and the others).

Are there any other things I could do? Can I reset Bonjour? (When I toggled it off and on I dont have to re-enter the password which surprised me.)

I have temporarily added CloudKit syncing just for the Inbox as a bandaid.

PS Just had a thought. My other databases are all indexed, with the original files in Dropbox. Would this make it appear that Bonjour is working for the other databases, because a simple adding a file on one machine would be sync’d by Dropbox to the other machine, and then picked up by DT?

Will create a test DB not indexed and see if that syncs by Bonjour.

PS2 I created a TEST database on each Mac and they have NOT synced across by Bonjour, so I now believe that Bonjour has stopped working completely. Can I reset it somehow?

I restarted the Router which didn’t fix it, but may have had an effect in next steps.
I tried reversing the roles of the Server and Client Mac. That didn’t fix it
I put the server/client roles back to the original way round, and suddenly the Server Mac
appeared as a location on Client Mac (see screenshot) and everything is OK again (after ticking the boxes!)

I had somehow got it into my head that because Bonjour doesn’t have a syncstore that it wouldn’t appear in the Sync prefs window, so the fact that it was missing didn’t put up a red flag.

Leaves the question of why this happened, but I will know what to do next time. 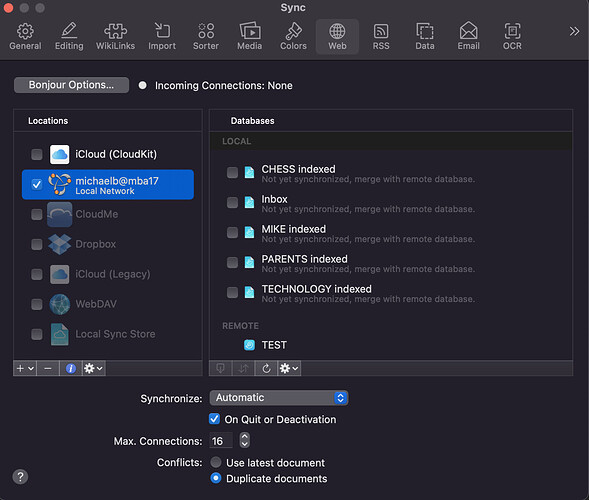 Glad you have it resolved.
And yes, the client device will have a sync store for its connection to the server device.

And yes, the client device will have a sync store for its connection to the server device.

That has slightly confused me but I suspect it is terminology.

Have I got this right now?

PS It doesn’t seem possible to “Clean Database” for a Bonjour sync store, which is sometimes useful.

Sorry to labour this but may as well get the terminology straight while on the subject!

So Bonjour doesn’t really have a sync store, (but you could consider a sync location as like a local sync store). Is that right?

Correct. Bonjour is a direct connection sync between devices.

That’s why your earlier statement “the client device will have a sync store for its connection to the server device.” had me a bit confused

Think I have a better understanding now. Thanks very much for the inputs.

I’m having a similar problem, having just started using Bonjour to sync between a MacBook Pro and my iPhone, but the fixes mentioned here haven’t resolved it. To be clear, my problem today is that the database-specific inbox syncs just fine, but the global inbox does not. Is this a limitation of using Bonjour? Or is there some other way to diagnose/fix this?

Did you check the Log panel, did you verify the global inbox?

databases all validate successfully without a peep.

Verified on the iPhone or on the Mac?

Mac, sorry, I didn’t even know you could verify on a phone!

sorry, I didn’t even know you could verify on a phone!

Please check also the log and the verification on the phone, thanks.

Verify reports no problems, and there is no icon at the top of the setting screen or elsewhere to indicate any issues are in the log.

To be clear, are you talking about the note in the global inbox that won’t sync? Or more generally?

In whatever problematic database(s) you have.

Hello there, I have some questions in relation to bonjour.