And did you try a reboot of the router too?

When something similar happens to me it is because my iPad is connected through mobile data, whilst my Macbook is through wifi.

Yes, I have rebooted the router. And I turned mobile data off on the phone.

So basically I’ve done everything that has been suggested. Still there is no Bonjour connection between the devices.

I am beginning to wonder if the fact that I am synching the devices with a Dropbox sync location that this is somehow inhibiting a Bonjour sync. (Though the DEVONthink user manual does state that you can use both methods in parallel.)

Sync locations don’t affect each other. Is there only one WLAN or are there multiple ones that could be used by your devices?

In this day and age it is a rare device that cannot detect more than one WiFi network at any one time. But the first thing I checked—and have continued to check—is that both my devices in question are on the same network (my default home network).

Which port do you use for incoming connections on the Mac? See Preferences > Sync > Bonjour Options.

As per the instructions, I let the app make the selection. I didn’t set it myself

That’s the problem BLUEFROG. I can’t enable Bonjour in DEVONthink To Go! As I wrote in my original post:

But when I go to Settings/Locations in DEVONthink To Go and turn on the Bonjour location it shows “Local Network (Offline)” and the WiFi logo and MacBook server name are greyed out.

From scratch, here’s what I’ve done:

In a way I hope I’m doing something wrong—then it would explain why I can’t get a Bonjour connection. But I can’t begin to imagine what.

Do not enable Bonjour in DEVONthink To Go unless you are intending to serve its own databases. This is possible, but unusual when a Mac is involved as the Mac generally acts as the server.

Also, you should not re-use a Port number. This is akin to having two people with the same address of telephone number. Again, disable Bonjour in DEVONthink To Go on either device if the Mac is supposed to act as the Bonjour server.

And just to clarify… Bonjour can be used to Sync between devices, IF:

Finally! I found the problem. I hadn’t tried to delete the existing Bonjour location in DTTG. I did that, then created a new location, as you describe. And it worked!

But now I have another issue: when I slide the switch to select the database I want to sync I get a warning: “This database has not been downloaded completely to this device. Uploading it to a new sync location will cause problems because some items will be missing.”

Surely if the database is still downloading from another sync location (Dropbox) it will eventually upload all the items to the new sync location as they are downloaded from Dropbox?

I wish I could get my head round this whole syncing business!

Thanks for all your help

I haven’t been able to get anything expect the global in box with my iPhone, iPad and MacBook. I decided to not use bonjour since I’m not as familiar with it vs iCloud But since iCloud isn’t working maybe I should try it. The question is do I need to be on the same WiFi for bonjour? The advantage of iCloud I thought is being anywhere to have everything in synch…

Ughhh just bought DEVONthink go, DEVONthink pro, Devonagent, and DEVONSphere but not feeling so good about my purchase yet with this non synch issue!!!

Yes, you need to be on the same network for Bonjour to work, just as I noted above.

Since you are connecting to a location that contains the contents, i.e., the Mac, you can press Proceed.

Ok, great. Thanks for your help. Can’t help think that a more user-friendly interface and/or instructions would have helped avoid this whole episode. I’m not exactly a computer novice, but the procedure and language managed to defeat me.

You mean outside the instructions I gave you and this from Help > Documentation > In & Out > Sync ? 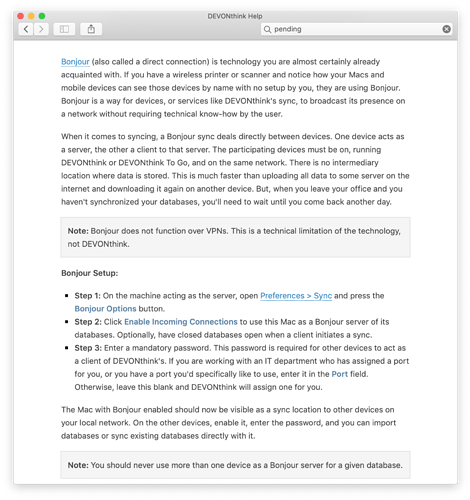 Your instructions were helpful, and helped me arrive at the solution.

But the first thing you stated was:

Do not enable Bonjour in DEVONthink To Go

Here’s what the help documentation says, after explaining about enabling Bonjour on the Mac:

“On the other devices, enable it…” seems to my small brain to be exactly the opposite of what you, correctly, stated. If you want to set up a Bonjour sync to my mind it seems completely unintuitive to see an item under SYNC in the settings that says, and indeed apparently should say “OFF”.

it equals the Mac with Bonjour enabled.

So, err—the help instructions say “On the other devices, enable the Mac with Bonjour enabled”? I wouldn’t understand that if my life depended on it.

I don’t think we’re getting anywhere really. If you insist that the instructions are clear, there’s nothing much I can add I’m afraid.

Again, thanks for your help

No, just noting what the pronoun meant in this context. I will look at the verbiage. Cheers!