Change the size of a encrypted database?

If I import a larger amount of data than originally set into a database and restart DT, this leads to a serious file problem and the database is write-protected. Is there a way to resize the database afterwards? In addition, there is no indication during the import that there is not enough memory available.

In other words, what is the size for with encrypted databases?

No you can’t resize it.

There is no size for encrypted databases. As noted in the Help > Documentation > Getting Started > Build Your Database… 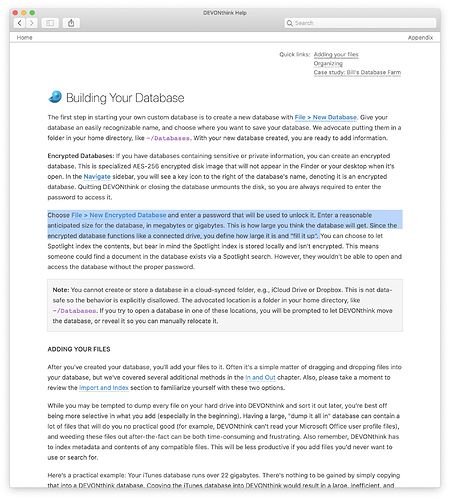 You should be specifying it at a reasonable maximum size *(and/or rethinking your database construction. For example, why do you so quickly have a 15GB database, unless you’re adding video and audio files?)_.

If you anticipate your database will be a maximum of 2GB, specify it as 4GB. If you think 15GB, specify 18-20GB, etc.

Okay! Now the only question is how to get the data again, for example to create a new database. Unfortunately the database is read-only after the error message. When I go to rebuild or backup nothing happens!

Maybe one more clue. The size of the database in the Finder corresponds to the size defined before. Within DT, however, I get 8.7 GB. Can I open a database manually and delete data?

The size of the database in the Finder corresponds to the size defined before.

I don’t know what you’re referring to here.

Can I open a database manually and delete data?

In the internals of a database? Definitelynot, unless you want to cause errors and inconsistencies.

Hi @BLUEFROG! Thank you very much!

When I set up a new database, I specify a size. For example 1024 MB. The Finder will then display the empty database with a size of - say - 30 MB. If I add data now, the database in the Finder grows more and more. This is where I got into my situation.

I have added data that exceeds the defined capacity. After importing the data - with no error message - I deleted the data again. I had already noticed from the duration of the import that the amount of data is very large.

I then deleted the data directly from within DT without closing the database. But the import was finished and the database was larger than the defined 1024 MB. Even after deleting, the Finder on the Mac shows a database with 1024 MB.

My biggest problem is the read-only database, which I can’t do anything with anymore. Is there a solution here?

Thanks a lot! Super your help!

No one has any ideas?

When I set up a new database, I specify a size. For example 1024 MB. The Finder will then display the empty database with a size of - say - 30 MB. If I add data now, the database in the Finder grows more and more.

That is correct and how these databases work. You specify a maximum size but the space isn’t consumed until you add files to it.

I am not able to over-fill such a database.

Your right @BLUEFROG! I tried it myself

Unfortunately nothing happens when I click on Rebuild or Backup. Do you have another idea to repair the database?

Hold the Option key and choose Help > Report bug to start a support ticket. Thanks.

Is the maximum size of the encrypted database set to the size generated when creating an empty database?

Hi @Ting,
if I got @BLUEFROG right its exactly as you say. You define the size of an encrypted database during the creation. If the database if filled up, no further files will be imported.

Yes, the size of the encrypted empty database is ultimately determined by the maximum space you set when you create it. This involves the encryption of the database. It is too esoteric and may be a protection for the database and encryption.

When you create an encrypted database, you are creating an encrypted disk image that houses the DEVONthink database.
You should anticipate the reasonable maximum size of the database, then give yourself a little margin - maybe 10-20% more space, e.g., 12GB specified if you think the database will ultimately grow to 10GB.

You could either move the items to another database. Or change the extension of the encrypted database to .sparse image while DEVONthink isn’t running, mount the volume and copy the .dtBase2 package from the mounted volume to the desired location.

Can the .dtSparse images be resized like a regular sparse image on the Mac using disk utility?

No, this is not possible to do in the current state.

Can the .dtSparse images be resized like a regular sparse image on the Mac using disk utility?