The latest release of Safari Technology Review: Release 80 (Safari 12.2, WebKit 14608.1.16), which I use because of a conflict Safari has with a different third-party extension, no longer supports the Devonthink Clipping extension for Mac Safari. Further it removes all extensions that are not certified for use with the browser.

The extension (v. 1.3) seems still to work with the general release of Safari for Mac. But it would be incredibly inconvenient to keep switching between browsers (loading the same page already open in one into the other…etc.) I also have Firefox and Chrome for the desktop, and these permit the Devonthink clipping extension to operate. But again, the same logisitical problem switching between browsers (and having to compromise with other browser-exclusive anomalies and idiosyncracies).

Does anyone know anything about this? It seems as browser developers necessarily get security crazy, it’s very difficult for production application developers to keep up with mounting obstacles to operation.

We don’t code for betas or technology previews. The browser extensions are made for public releases.

Thanks for the fast reply. I suspected as much. Easy enough to deduce, as Devonthing clipper works perfectly well in the standard Safari browser.
I use Devonthink a lot more than that other clipping extension, so I guess I’ll revert to Safari public release. I had switched at the suggestion of the other vendor. Can you briefly say, without getting into the technicalities, which I wouldn’t understand anyway, whether it gets harder and harder to track and adapt to Apple’s architectural “adjustments?”
Thanks again.

whether it gets harder and harder to track and adapt to Apple’s architectural “adjustments"?

Generally, it’s not but their Quality Assurance has been lacking in recent releases (hence Sierra -> High Sierra). And their blurring of the lines between iOS and macOS has created some unexpected trouble, for developers and users alike.

The simple solution is to not use Safari as your primary browser. I find Safari slow, having constant issues with extensions, and poor in displaying a significant number of websites. Other browsers such as Chrome, Chromium, and Firefox are also reported to be more secure and and have desirable features not available in Safari. They also have more flexible user settings. As a personal example Microsoft’s OneNote (can turn webpages into editable articles and allow removal of marketing and ads) runs 3x-5x faster in Chrome than in Safari and gives more consistent results.

Frankly, I am at the point that with all of Apple’s buggy software releases and outrageously priced and closed hardware, if I could find another reliable OS and hardware platform that could properly run Mac Apps, I would dump Mac OS and Macintosh completely. Unfortunately, after 20 years of using Macs, I am so entrenched with Mac Apps that it is simply not practical for me to migrate to Windows or Linux unless there is a practical and reliable method of running Mac Apps, of which I have yet to discover. That said I am quite fed up of being a volunteer beta tester, as we all now are, for buggy Apple products.

I go in the opposite direction with regard to browsers: Safari primary, but I pop over to Brave if I need a particular extension. Almost always, that’s the Buffer extension.

I love DevonThink but I find the clipper almost useless for articles. I go into Readability mode and save a PDF of the page to DevonThink. Hopefully, the DT clipper will improve soon; the fact that Bear and Evernote, to name two examples, have good clippers that are light-years better than DT’s says that this is a solved problem.

I sympathize with GymW, and understand what Mitch_Wagner says. At any time, I have at least four current versions of what I’ll call “major” browsers (let’s say, those with at least 10MM users) on my desktop. Not open at once, but among which I switch for default position. Safari predominates, and it does have its faults and consistently has always done (and as for speed, I think the truth probably lies somewhere between its Jetstream readings—a test that Apple itself devised, so hmmmm…—which make it the fastest, and what Gym_W has to say).

I am also not sure about the status of the clipping extensions that predominate in my research workflow. My problem with Safari (and led to installing the Technology Preview version) was that Evernote Webclipper revealed what is apparently an arcane bug (which, after extensive testing and back and forth with Evernote support, they admitted they were aware of, including its rarity, and were struggling to fix it for a future release) and since I use Evernote with equal frequency to Devonthink, this was a serious problem (especially now that DtO Pro clipping is restricted to the gold release of Safari and not developer versions). In the meanwhile, I am currently using Vivaldi as my default browser—this uses Chrome versions of extensions, and everything is cooking, including my third go-to clipper, Zotero, which was a disaster for awhile on Safari.

I don’t envy developers of productivity tools like Devonthink and Evernote, which are predicated on heavy use of the Internet, and particularly with web access to research resources.

I would attribute the inconsistent behavior of DtPO not to the shortcomings of the extension, but to the vagaries of how a site elects to be configured. Any extension like Devonthink’s, which is scraping content and reformatting it as PDF, has to run the gauntlet of how the site is set to deal, among other things, with Reader View renderings (which may or may not strip out images), with paywall security measures… most sites with page content you want to clip, even when you have logged in as a paid subscriber, interpret the call from DtPO to download content as an attempt to view from someone not logged in. Or the page is simply configured not to give up any more than the URL used to access it. The only alternative in the latter instances, is either to use Mac OS print services to PDF shared to Devonthink and then inside DtPO to add notes and tags and so forth, as well to assign the document to its proper folder in the db, or to open the page in DtPO (signing in in that built-in browser) and saving the PDF from inside the app.

Whatever we do, it seems we are more at the mercy of the developers of the OS and/or the web browsers in question, not to mention Website Management of millions of sites, and less so at those of the hard-working developers who not only have to keep us happy with better and better features and functionality, but have to try to keep pace with the superset of factors out of their control.

I just updated to Safari 13.0 and it disabled the Clip-to-DevonThink extension. I had a look at https://www.devontechnologies.com/support/download/extras and it looks like there is no Clip to DevonThink extension for Safari anymore. What happened? What do you recommend should I do? So far it has not been my plan to upgrade to DevonThink 3.0 and I wonder if this upgrade would solve my problem. I used the extension very much and despite all well-known arguments against Safari I like it. 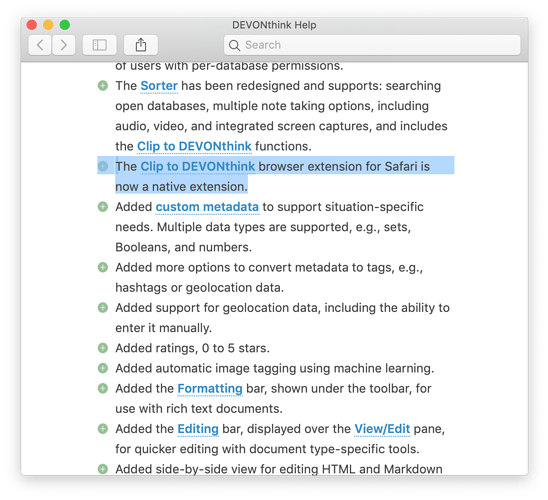 You just need to enable the extension in Safari’s Preferences > Extensions.

I am sorry but to me it looks more complicated. The extension has been there and I am aware of how to handle Safari extensions in general. But now the extension has been taken away by Safari after update to 13.0. And I can’t find it for new installation either on the DevonTechnologies website nor the AppStore.

Did anyone else upgrade to Safari 13 and experience the same?

I see there a second discussion has started on the iusse in the forum named “Safari extension?” (I can’t include the link in the post).

I observe a vast improvement in Web clipper functionality, on both the Mac and iOS versions. I’ve only tried it on a few articles so far, but it seems to work great now. Big changes recently, perhaps in the December update?