Disclaimer: I have not even begun to wrap my mind around DevonThink, let alone been able to make it part of my work. I would like to.

Is it possible to have collapsible outlines as Annotations to Items in DevonThink?

I am an inveterate outliner. (I have been adrift since Jayson took the tent pole out of Circus Ponies.) The simple-seeming set-up I would like to start using DevonThink for is this: manage text and video resources (mostly learning materials) and my notes from those resources. This seems ideal for DevonThink: import PDF’s, URL’s to tutorials, etc., and take notes in a linked Annotation. And that may work well — but I rely on collapsible outlines for my note-taking and reviewing.

I can make hierarchical lists in the default Annotation. But the parent items are not collapsible.

I see some forum posts on using Folding Text … an application I thought was brilliant, but which afaik has been all but abandoned.

Is it possible to use an OOutline doc for Annotations as they are used in DevonThink (two way link, or some quick and enduring linkage)? Is that too much overhead/program-switching/complexity? (OOutline is already more than I need, but I imagine limiting my OO-Annotations to a single column.)

Other posts suggest not using DevonThink for note-taking, but rather using another program and indexing the files created. This seems complex.

Again, all I want to end up with (now) are collections of resources for learning skills, my notes on them and from them, in a fast, flexible, searchable, tag-able database.

Is it possible to use an OOutline doc for Annotations as they are used in DevonThink (two way link, or some quick and enduring linkage)? Is that too much overhead/program-switching/complexity? (OOutline is already more than I need, but I imagine limiting my OO-Annotations to a single column.)

DEVONthink does neither support outlining nor this file format of OmniOutliner.

DEVONthink does neither support outlining nor this file format of OmniOutliner.

Thank you. Good to know. 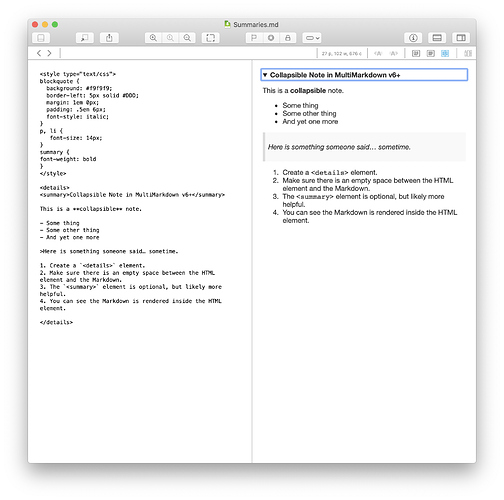 I’d support having an OPML file as an annotation along with RTF and MD. I’m sure this would be of great interest to all outliners alike… including me. Is it feasible somewhere in the near future?

“I’d support having an OPML file as an annotation”

+1 with a drum boom and confetti. I’d pay cash for this today.

OPML isn’t a native format to DEVONthink (i.e., you can’t create one and edit it like OmniOutliner, etc.) so it would have to be developed, unless you wanted to hand code them (and I’m guessing you dont

The suggestion is noted.

And note you can create a Markdown annotation template file for your own use.

And here’s a simple example…

The <%documentLink%> will resolve to the item link of the original file and will be presented as a URL.

There is a %recordName% placeholder but it isn’t detected when using a Markdown Annotation template. If it did work, you could use…

[%recordName%](%documentLink%) to resolve to a valid Markdown link.

@cgrunenberg would have to assess the feasibility of that.

I also really like the folding feature in OO. I had stopped making so many files in OO as I was trying to limit how many apps I was using to store information.

But I just tried putting an OO file into DT3, I was surprised to see it in the document viewer. Not only that, but I was able to expand and collapse hierarchies. When I opened it externally (double-click on it or used the Open Externally button), the file opened in OO and when saved, saw the updates in DT3. There’s a small delay when expanding and collapsing, but it’s entirely useable.

Though searching for content from the main search returned the OO files in the search results, I wasn’t able to search within the document itself.

This works well enough that I’ll probably move all of my OO files into DT3 and stop using the OmniPresence app for synching between devices.

This works well enough that I’ll probably move all of my OO files into DT3 and stop using the OmniPresence app for synching between devices.

Yes, I know these are not going to happen, but they would be a major boost to DT3 functionality. Mind you, you could say the same about every other productivity programme, so think of the kudos if you were to implement them…

I’d rather have WoW keybindings

I had not thought of testing this on iOS yet, and probably wouldn’t have until I needed to access one of the OO files. So I just went into my iPad to see what happened. Of course, DTTG does not know what the OO file is and cannot even display the content.

However, I opened the OO app and navigated to the DT files in Files and was able to open up the file. I made some changes and those changes were synched back into DT3 on my Mac. This isn’t as convenient as being able to view the content from within DTTG or open the file in OO from DTTG, but it seems workable. This was with OmniOutliner 2.11.1, as I haven’t felt like paying for the update yet.

I have no idea how Quick Look works with apps on iOS 13, but the Files.app can at least preview OmniOutliner 3 documents. Despite some users opinion that apparently DEVONthink To Go is perfect as is now, I hope OO document preview in DEVONthink To Go comes soon. 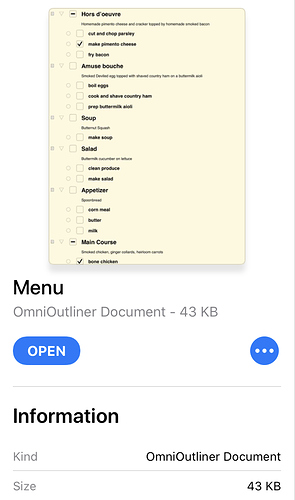 I index OmniPresence folder in DT Inbox, then replicate where needed (tag with group tags). On iPhone I just use native OO app: it’s faster, more comfortable and syncs natively (there are reasons why OP is still here, having all iCloud options)

(there are reasons why OP is still here, having all iCloud options)

Just because I’m curious, could you elaborate on what those reasons are (why OP is still here) because I don’t see any myself. It can be said that OO syncs natively on iOS with all services supported by iOS 13, including iCloud Drive, DropBox, other cloud providers, direct into DEVONthink’s iCloud folders, etc.

My issue is remembering that I moved the files into DT, as I left them in the OP folder for now. Indexing might help with this, but the problem I ran into was no replication between different databases.

I suppose I could index the OmniPresence folder into both databases and replicate into the appropriate groups from there. That might be the better solution for me, as it would keep the files in one place, but available in DT with related files.

Can you open the OO files externally into OO from within the DT indexed files?

Any document in DEVONthink can be opened in the system default application via Command-Shift-O, as long as there’s an application set in the Finder.