This is a script that I use as my own daily journal. It was written for the most part to help me learn applescript and in particular, scripting DTPO. Feel free to use the script any way you wish.

Edited 12_15_2013 : Added korm’s script for adding a new note in DayOne with a link back to the journal record in DTPO
If you have Day One and the Day One journaling CLI installed, set the appropriate flag to true before running the script.
Edited 12_17_2013: Changed the dayOneFlag to default to false

Here is a screenshot of the output: 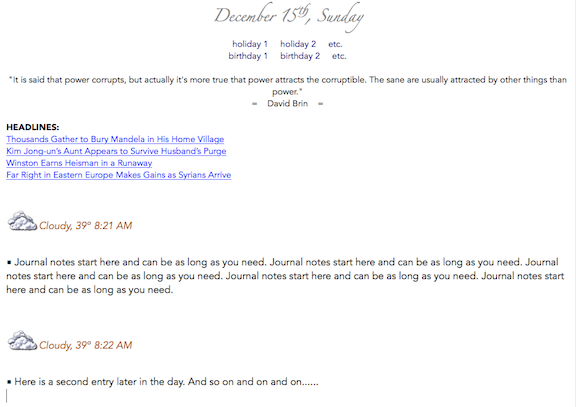 Just ran across this. Very nice, Chuck! I even learned something from it (still learning after all these years)…

Yeah, it gets kind of addictive.

One thing you might consider is changing the name of the script to allow it to be run from a hotkey. Just add three underscores and a well-chosen key. (Command will always be assumed if you just enter something like “chucksJournal___F1.scpt”. PS: Function keys work nicely in this case.) Look at the Templates folder for some more examples of the syntax.

No, but really, thanks for sharing your work on the forum.

Hey why did you delete your script?

I planned on using it to learn apple script just like you did and I think it could be useful to others in the future.

Hey why did you delete your script?

I planned on using it to learn apple script just like you did and I think it could be useful to others in the future.

There was a, uh, glitch. The script is back up. Hope it helps.

I love this script … it would play well with DayOne or other journaling app – linking back to DEVONthink.