I think this popup is fairly recent, and I am finding it a bit confusing: 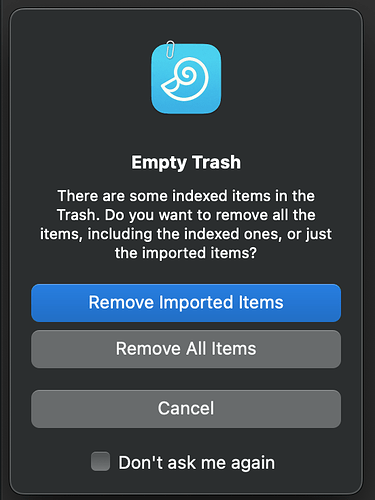 I suppose I am too used to Lightroom Classic, where the choice is clearer to me: 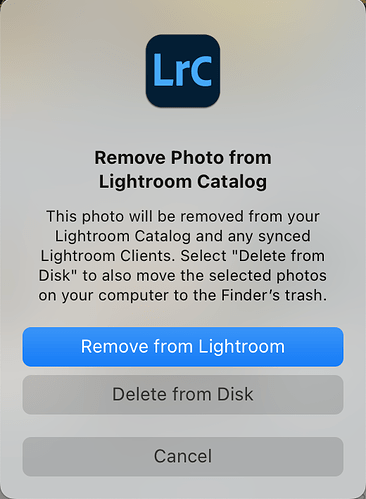 Perhaps this is just me, or maybe the DEVONthink/Lightroom parallel is not valid and the DT message is not equivalent.

Thanks for any confirmation or clarification.

As noted in the verbiage, there is a mix of imported and indexed files in the Trash. It’s merely saying, “Should I delete only imported items or the indexed items too?”

Thanks for quick reply!

But I don’t have any imported items in DT, everything is indexed.

I have been re-reading the manual and I can’t see that the popup I posted in my OP is covered there. The two other popups shown in the manual are clearer for me.

For context all my files are in a four parent folders in Dropbox. Each of these four is a separate indexed database.

I love the tight integration with Finder, and when I delete something in DT I want it gone from Finder/Dropbox. This is the opposite of most threads I have seen where people are concerned to keep it in Finder.

I love the tight integration with Finder, and when I delete something in DT I want it gone from Finder/Dropbox. This is the opposite of most threads I have seen where people are concerned to keep it in Finder.

Indeed, there are two sides to the coin, three counting the faces, two counting the edges (and ignoring ridges), countless normals (depending on the subdivision level) and many other views - hahaha! (3D humor - how nerdy is that?!?

It’s not always easy to accomplish these goals for everyone but I think @cgrunenberg has kept pace with and provided options that work for most.

Perhaps the dialog box could be improved for clarity …

You have selected both indexed and imported items. You can choose to remove only imported items or all items. Removing all items will also delete indexed items at the Finder level (move them to Trash).

But I don’t have any imported items in DT, everything is indexed.

I am wondering if the reason there were some imported items in my trash is related to another small mystery that has only happened very recently:

I found identical copies of a few Numbers spreadsheets I had edited very recently, File names were “My name copy” and modification dates were the same to the second. I deleted these but now wonder if they were the imported ones causing the message in my OP.

Any suggestions how/why these copies might have started appearing very recently when I have been modifying these same files every few days for a year or two?

Next time it happens I will check if the copy also appears in the Dropbox folder.

I assume there is a way to search a database for numbers of imported and indexed files? I would like to check if any other imported files remain.

Perhaps the dialog box could be improved for clarity …

Now that I understand the reason for the message I think the words are totally clear.

I initially was puzzled because I was so sure ALL my files were indexed, so there couldn’t be any imported ones. So I didn’t believe the message could mean what it says.

See my message above for why I might have had an imported file or two in trash.

I assume there is a way to search a database for numbers of imported and indexed files? I would like to check if any other imported files remain.

Do a toolbar search item:!indexed or create a Smart Group.

Are you edting and doing a File > Save As ?

Do a toolbar search item:!indexed or create a Smart Group.

Thanks. Will do when I get home later.

Are you edting and doing a File > Save As ?

Not knowingly! Will observe more carefully next time I make changes and also monitor for introduction of unintended imported files.

Thanks. Will do when I get home later.

I did a search for item is not indexed. As expected there a no imported items. (only the few still in the inbox).

It may still be the case that the unexplained copies were imported and what caused the message mentioned in my OP. I will keep watch for this copy issue to try and pin it down. Also if I get the OP message again I will cancel and search again for any “not indexed”.

OK now I am puzzled.

-Started with no items in trash.
-Found two unexpected copies of the same file in a DB
-Checked the master files of the copies were in Dropbox…which they were, so indexed not imported.
-Searched for “items not indexed” in the database…there were none (screenshot)
-Clicked empty trash in DT3 and got the “imported only or all” message in my OP. Did not delete them…chose cancel option.
-Searched Trash for “not indexed” again… there were none (screenshot).
-There was nothing in Trash for any of my other DBs. The only items in trash are these two indexed files.

Why am I getting the dialogue which is supposed to happen when there indexed and imported files in Trash. 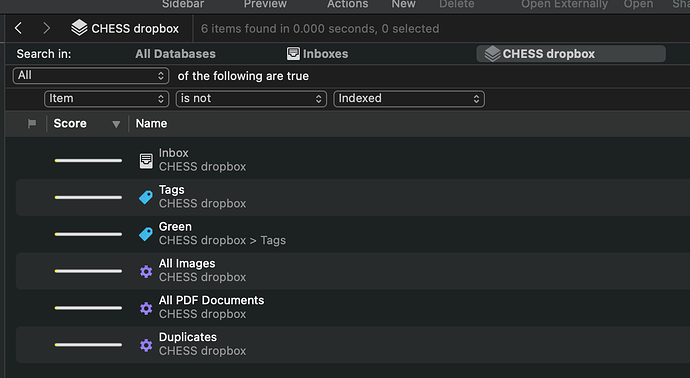 I am not seeing a search like this working. @cgrunenberg would have to weigh in on whether that’s expected or not.

I suggest you using the Tools > Filter > Info filter, select the top-level Trash, then set the File Location dropdown to Imported. What do you see?

I suggest you using the Tools > Filter > Info filter, select the top-level Trash, then set the File Location dropdown to Imported. What do you see? 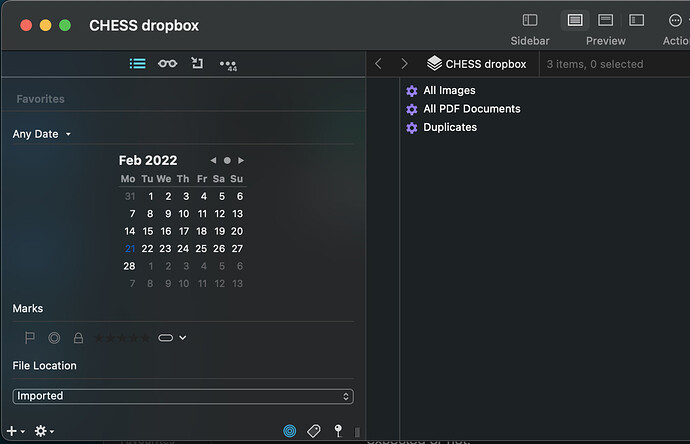 That appears to be the database, not the Trash.

Sorry, my mistake. here it is for Trash: zero imported. 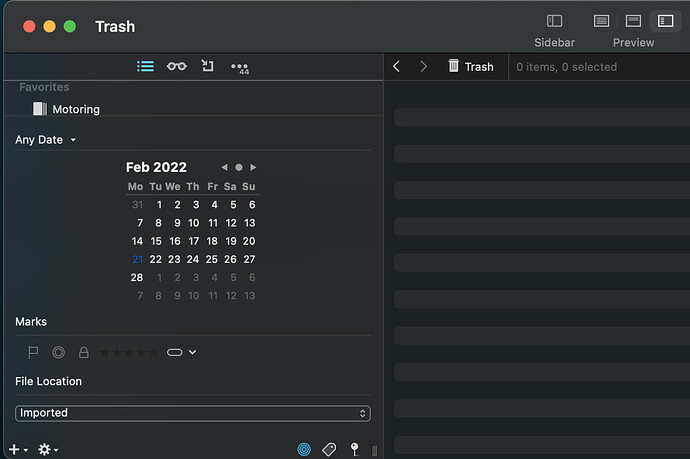 Another way of presenting this problem in a single screenshot is this: 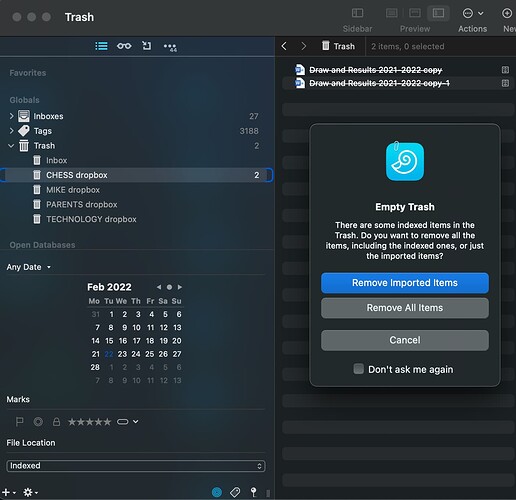 I just cannot help myself from sharing thoughts on this.

With all due respect and fondness for the folks at DevonThink, the extraordinary applications, and wealth of support provided – Why can’t the pop-up information just be simple, clear, and unambiguous?

Given that 1) computers are really good at keeping track of these things (much more so than people), 2) pop-up dialogues catch our focus (and already have words in them) and 3) it doesn’t really cost anything to have more clarity in the dialogue messages – why can’t the messages presented within the dialogue about the trash choices actually explain it clearly??? Look at the number of discussions (and frustration expressed about lost files, er ah - accidentally deleted files) around not clearly understanding the messages of this dialogue box. Is the simplicity of language choice for the dialogue box really not a viable solution? Is the crux of this issue based on the meaning of words and daily use of words when translated into different languages?

Yes, this is in the manual - but should one need to refer to a manual to understand how to delete stuff from either the DB or the disk? I really want to use a combination of imported and indexed files. I read the manual a number of times but I have run into so many instances of not knowing what the deletion choices do without needing to look it up, that I have given up using indexed files.

So now - I will never mention this again