I am coming across ever more PDF’s that cannot be annotated by DevonThink. I already changed the hidden preference, I forget the name of it, but that does not always fix the issue. Is there away in DevonThink to force a PDF in to writeable mode?

If the hidden preference is enabled, then all PDF documents which are not encrypted and with sufficient permissions (see e.g. Info dialog in Preview.app) should be editable.

I think I may have come to this a bit late, but am having similar problems. Could you tell me a little more about the hidden preference please?

Could you tell me a little more about the hidden preference please?

Just see appendix of help which describes all hidden preferences.

Thanks.
I have clicked the option to force editable pdfs to on, but the issue persists. When I check with Preview on a sample I can see the document was generated by MS Word & requires owner password to edit. I suspect I am stuck with having to OCR it to annotate.

Protected PDF documents can’t be edited, the only workaround is to export it as or print it to a new PDF document (e.g. using Preview.app if possible depending on the macOS version).

When I come across a PDF that I can’t annotate in DevonThink I can always annotate using Preview or PDFExpert or GoodReader.

Usually and what I did in this case… Is get the PDF into DevonThink. Try to annotate and I can’t. Open the PDF in Apple’s Preview App from DevonThink (right+click->OpenWith). Highlight any random word in Preview. Close (not save) the PDF in Preview and go back to DevonThink and I then I can annotate.

This does not always work.

For this specific PDF It was encrypted, but it was marked as editable and annotatable. After the first annotation with Preview the encryption was removed. But not explicitly by me.

After the first annotation with Preview the encryption was removed. But not explicitly by me.

DEVONthink could of course handle it like that too but at least in my opinion an encryption shouldn’t be removed silently.

I feared as much, thanks anyway.

oops this reply was for @BillW

Maybe open the document in Apple’s Preview App and look at the inspector settings. Here is a screen shot from the document I couldn’t initially edit inside of DevonThink. It WAS encrypted when I first looked at this dialog but I didn’t screen shot it until after I tried to annotate it with Preview. This screen shot was taken after the annotation. 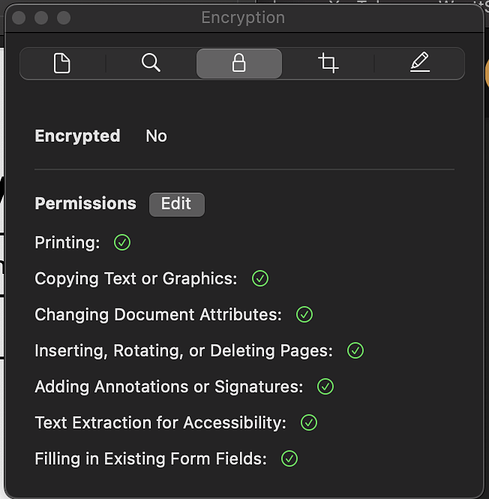 I don’t have the pre-annotation version of the document so I can’t prove what I am seeing i.e. Preview removing the encryption, but it did happen…

Maybe a brief explanation: some PDFs utilise PDF security, which is designed to limit what a user can do with the PDF; they may only be able to open the PDF with a password, or be prohibited from printing or copying from the PDF. This is not a discussion on the merits of those security levels, just a statement of fact. The hidden preference will not change how DT behaves towards those PDFs, as DT honors PDF security.

Some PDFs are in some way substandard; DT expects that editing them will break them. So they may appear damaged after editing, or the text layer may be non-functional. Per default, DT does not allow the user to edit such PDFs to avoid damage. The hidden setting can be used to override that default behaviour; obviously in some cases editing the PDF will cause no ill, but in many cases it will. That may still be preferable to the user; the hidden preference allows savvy users to take their own decision.

Well IMHO… You are suggestion we remove the encryption another way, just very long winded and multiple steps. I have to say that not being able to edit and annotate PDF’s inside of DevonThink adds considerable friction especially in a Paperless-office scenario. Just saying…

I thought DT just used the PDF engine supplied with the MacOS… So the behavior should be similar to Preview App. Is not the so?

IMHO, the friction results from the fact that the PDFs are encrypted. If that’s required (legally or otherwise), removing the encryption shouldn’t be an option anyway. If it’s not required, why encrypt it in the first place.

I just received a PDF from my insurance that had a password set on it. The content was just a collection of stuff I had received previously in different e-mail messages unencrypted. So the encryption was completely pointless (and successfully circumvented). Chalk that up to “security by obscurity”.

DT uses PDFKit - whilst Preview also does, Apple products apparently have access to functions not made available to third parties. I don’t know whether in addition DT are able to configure the way PDFKit is used.

You are right. I think that most people don’t understand the tools they use to create PDF’s and all of them have their “unique features”. Employees just do what is default.

Encryption is moot anyway because as @cgrunenberg points out Print usually gets around it.

But hey… it is DT’s app and their values embodied within it. Just frustrating for me… since I just wanted to mark an invoice paid…

Be careful forcibly annotating or editing PDFs with those options disabled. For example, Linux KDE Okular PDF viewer (with Windows port as well) can do that if you enable it. However, in most cases, the text layer corrupts and then you still see true text, but if you copy the, for example, underlined text, the text is garbage.

Not discussing the legality of breaking that kind of protection, the only secure way to annotate one of those PDFs is print them as graphic (if printing is allowed and if not, via any program that ignored the printing permission), and then OCR it. If I need to do that, once printed or captured in any way, I have Abbyy Professional Windows and OCR those with MRC enabled for most text clear. However, Windows version is way better than any other macOS OCR tool I’ve tested (and I’ve tested a lot), even macOS Abbyy itself.

Not sure if this is part of the problem but there has been significant discussion on Mac PDF problems of late on the website https://talk.tidbits.com (a site I highly recommend to every Mac user!! The main site is https://tidbits.com but the discussions are at the former site). DevonThink is mentioned there and in a couple of other discussions. There seems to be a degredation of PDF functioning that people are discovering. Hope the discussion helps.

Thanks for sharing the link. TidBits is definitely one of the venerable mac-centric sites still in operation. Cheers!

There’s been discussion on the forum recently about a change Apple made to MacOS which prevents the editing of some PDFs, and it’s something I have become unnecessarily familiar with.

However, in your specific usage I think you need to go back a step and next time identify why the PDF isn’t editable, because these are separate issues.

Is it encrypted (which you shouldn’t really circumvent but as we know is sometimes done in error), is it locked preventing editing, or is the file damaged in some way?

Apple are making it harder to resolve the first (which is probably fair enough since password locks exist for a reason), there are still a couple of workarounds for the second although Apple has also been closing loopholes on this (worth noting that although mentioned above, it’s not actually possible to print a fresh pdf in Preview now without the same security settings being carried to the new print - Apple disabled this in Monterey), and for the last one, disabling DT’s preferences for this is a bit of a caveat emptor situation because the file could be completely unusable by the time you’ve finished with it. The setting here exists to save you pain unless you’re certain the file is robust.

Whilst PDF problems are very annoying, the first 2 of these problems are caused by the creator of the PDF (except where a PDF actually is meant to be encrypted, and it wasn’t done in error), and the last is a safety feature to prevent loss of files.