DEVONsave shortcut works only once in iOS 14

I’ve been using DEVONsave Shortcul since I found it in iOS 13 without any issue. I’ve even extensively modified it. But suddenly, it has stopped working.

DEVONsave is a Shortcut that was announced here. I know it is not a DTTG thing but perhaps other people here are using it and have a clue of the problem.

As it stopped working, I went to the source, deleted all my incarnations and installed default ones, but they are failing as well.

What happens is very strange. I go to Safari, select DEVONlater and it works. Starting that moment it does not work anymore in Safari. Does not matter if I close all, etc. Solution is restart the iPhone or use it in another application (say, Inoreader web view) and sometimes works inside Inoreader, others not.

The strangest thing is I go to Shortcuts App, and any shortcut I try to run really runs DEVONlater!!! Sometimes mixed with the run one, sometimes it do the previous failed task, sending the Inoreader or Safari website to DTTG…

And the most strange thing is it has been working fine all weekend until today Monday.

Any clue in what is happening? Is someone experiencing the same? Thanks.

I have noticed that some things are not working when launched from the widget, such as the “Wait for Return” after using a x-callback-url. Launching from the widget also really limits memory available to the shortcut running.

I’m running it from the share activity. DEVONlater never worked directly from Shortcuts App, as it takes an URL or a text from the caller application.

The thing is after using DEVONlater first time, next calls breaks iOS. In iPhone seems works better and only affects to Shortcuts App, but in iPad, it starts popping out even with screen locked and the only solution is restart the iPad because once in lock screen, you cannot unlock it.

Using the Share sheet with x-callback-URLs is buggy on iOS 14. This is not limited to DEVONthink To Go but all callback URLs it seems.

Then I have completely clear to go back to iOS 13 in at least one of my devices to be able to use that Shortcut.

That those things happen with a 200 euro/usd phone/tablet, can be acceptable, but not for Apple.

You may be able to fix the issue, it sounds like the same thing I see when launching from the widget.

Try putting “Continue in Shortcuts App” right before the “Open URL with x-callback”.

This will cause the Shortcuts app to display, but it should allow the shortcut to complete.

I don’t uderstand anything. Now I’ve downloaded the shortcuts from creator page (https://axle.design/devonsave-a-shortcut-to-help-you-clip-websites-to-devonthink-to-go-quickly-and-cleanly#top) and once given permissions to execute another shortcut, any share screen shows on top a message and DEVONsave does nothing (It is the original shortcut, without adding your thing).

Aye, it has been a nightmare for once-dependable shortcuts.

@leebutler @rfog Is it this DEVONsave shortcut you’re discussing? If so, thanks for exploring this issue; it’s been driving me wild, too. I’ll try to put together some actions that make it more reliable and release an “official” update to it.

Maybe the worst part is the inconsistency, though. Sometimes it works, sometimes it doesn’t.

I was waiting for the official iOS 14 release in the hopes that Apple would fix whatever changed, but it seems like we’ll have to take matters into our own hands.

I think we’ll be able to put together a few steps that make it more reliable, using well-placed Wait to Return and Continue in Shortcuts actions, but it is not likely to get a lot better without some bugfixes on Apple’s end.

Then perhaps could be better report the bugs to Apple. I don’t have the knowing to do that, but seems here there are some devs… ).

Aye, though it would be nice to be able to point to exactly what’s going wrong. If anyone locks down where the shortcut’s breaking, let me know! I will be doing my own debugging when I get the chance.

Unfortunately, I do not think it is a bug but “as designed”.

IOS 14 added this to the info on the Wait to Return action:
This action will only take affect when running shortcuts in the Shortcuts app.

That is also still still there in 14.2 beta…

I think the core problem is that we shouldn’t really need to switch between apps to make this work to begin with. Continue in App/Wait to Return never used to be necessary, unless I am misremembering.

Wait to Return is required if you use Get URL with x-callback-url because shortcuts has to pause until the destination app handles the x-callback and returns something to the shortcut.

If you use the DEVONthink command URLs (without x-callback-url) then everything is working (at least in all my shortcuts…).

Did some digging and here is a screenshot of where DEVONsave breaks. 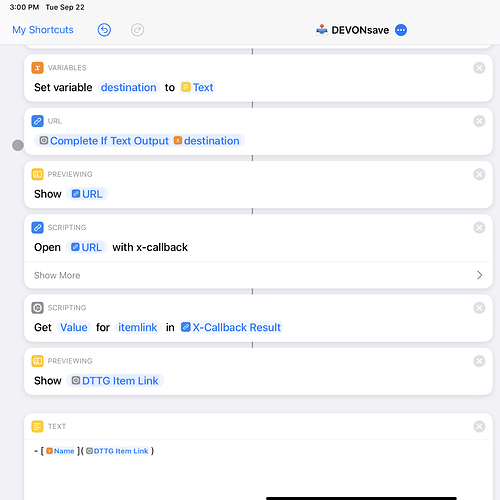 Thanks for this, very useful! I haven’t had the chance to work on it but I’ll play with removing /x-callback-url/ and with the order of operations to see if I can optimize it at all. Some of the last few items in the shortcut are nice to have but not critical to main purpose of the workflow.

The good news: this shortcut will work better than ever in the near future. I have fixed the issues here by changing some of the fundamentals. However, the fix requires features tentatively available in DTTG’s latest beta. So, the bad news: you will have to wait for the solution, I’m afraid…

(If you are in the beta, check out my recent post in the beta section of this forum for more details!)

Any updates on the Devonsave fix? It broke my share sheet as everyone described above. Would love to get this working if the update is widely available! Thanks