It seems that each time I open DT3 on my MacBook Pro, or my iMac Pro, thousands of items are downloaded, and many duplicates are created in the process. These items are indexed. It’s almost as if the two machines are touching the files, triggering the redownload and duplication.

The databases are stored in /Users/john/Databases, so they are not on a shared/cloud drive. Sync is using iCloud. I just noticed in the event of Conflicts, I have Duplicate documents turned on, but there shouldn’t be any conflicts, as I haven’t changed all of these files.

Edit: DT3 has been sitting open as I typed this. It just synced another 3k items.

Also note that in the last screenshot, the duplication is inconsistent, with a different number of items in the duplicate groups.

Is there something I can do to fix this? 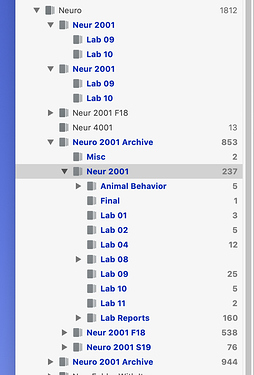 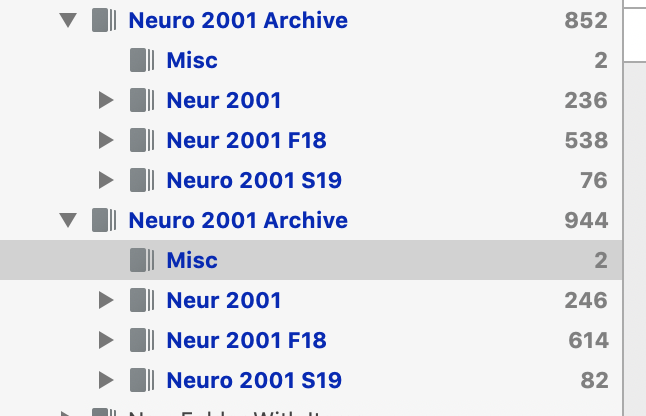 Is the option to duplicate items in case of conflicts (see Preferences > Sync) dis- or enabled?

It is enabled.
There shouldn’t be any conflicts, as I am not changing the files.

In comparing Get Info for two entries from duplicated groups, the date Added is 20secs different between the two. Which is odd.

I’ve switched to Use Latest for conflicts.

Are the creation/modification dates and the filesize of the items identical? What’s the path of these items (see Info inspector/popover)?

It’s very strange.
Here’s the part of the database that I’m looking at: 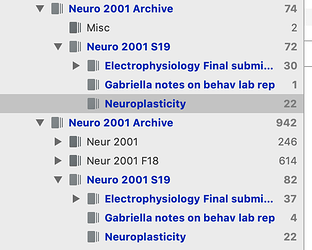 The first three files in the upper Neuroplasticity group:

Selecting the first, here are the duplicate instances. Note that some have a .txt extension, and I’m not sure why. 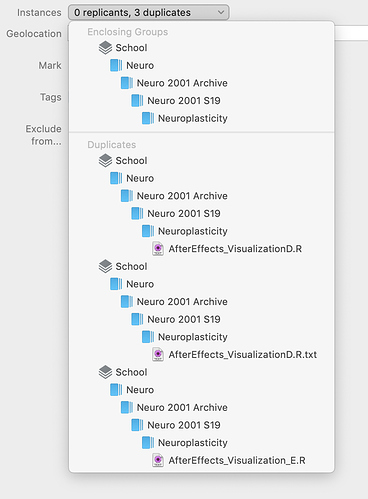 If I select the second file (AfterEffects_VisualizationD.R), the file is shown as missing, with three duplicate instances. Note that there are three different names shown as duplicate. 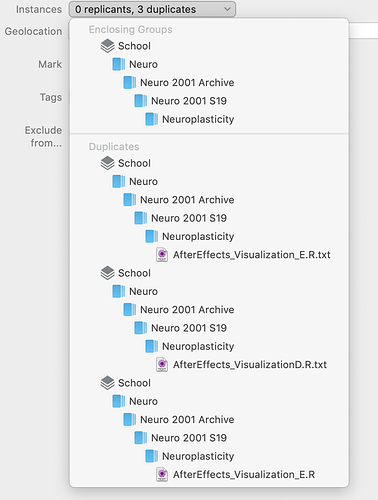 The third entry (engineering-graph-paper-bw.pdf) has one duplicate instance: 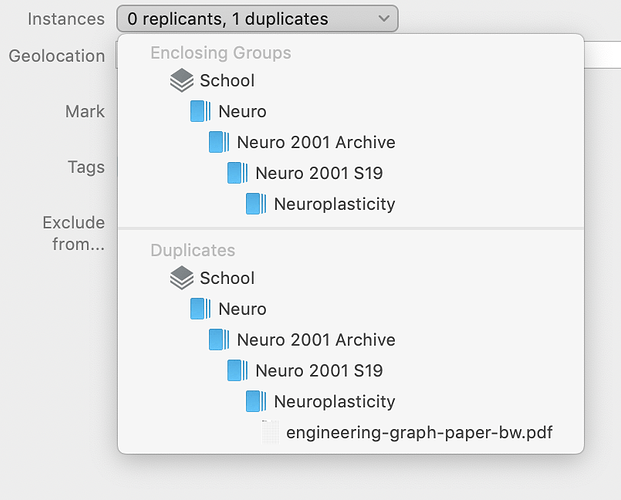 Going back to the second set of groups in the tree, and looking at Neuroplasticity there

One of the duplicate files has disappeared as I was documenting the above. AfterEffects_VisualizationE.R is no longer here. 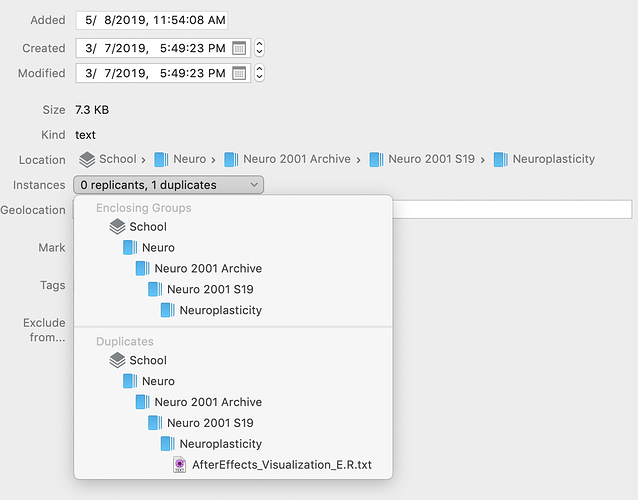 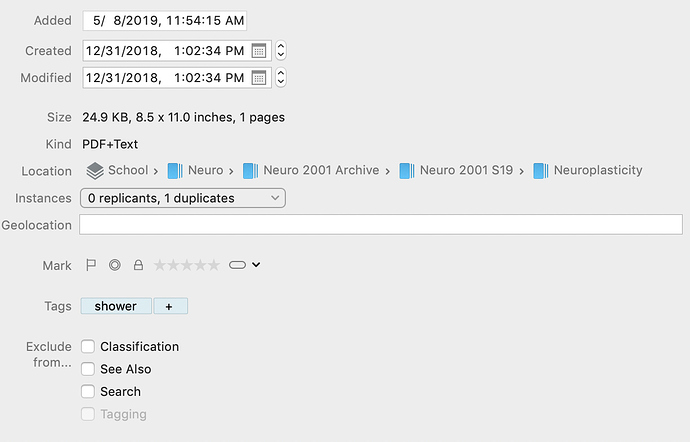 And a follow up pic of the first Neuroplasticity group showing that one of the entries is gone now:

Let me know what other info you need. It’s confusing, so I’m not sure what to post here.

Let me know what other info you need. It’s confusing, so I’m not sure what to post here.

Thanks for the screenshots! A screenshot showing the full Info inspector would be useful, especially the Path field should be visible. 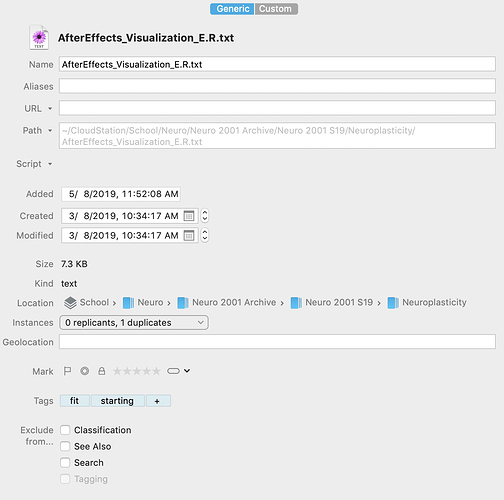 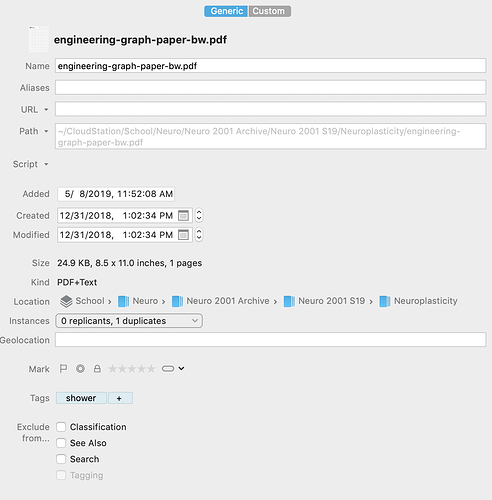 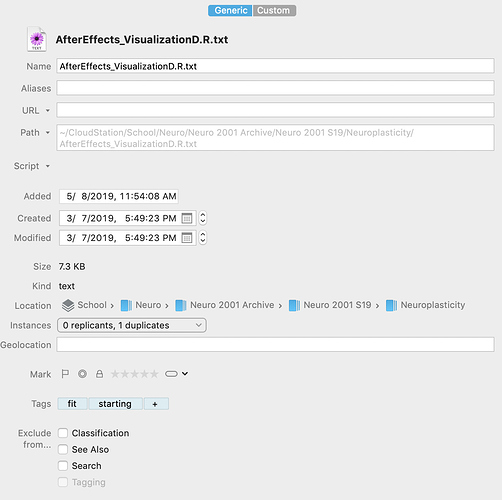 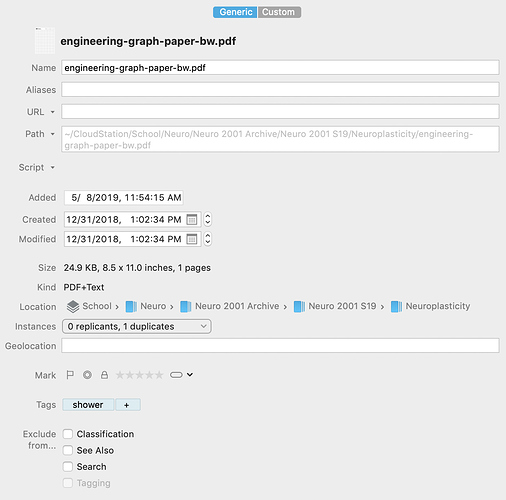 Is ~/CloudStation a local folder? Or is the data stored on a Synology CloudStation?

It’s a local folder synced to my Synology.

And is the data stored on the Synology also accessed by other computers?

Yes, this folder is synced to my laptop as well.
I also run DT3 on the laptop.

Both DEVONthink and the CloudStation software seem to synchronize this folder and this seems to cause conflicts. To fix this please try this:

This should fix the issue but the indexed contents won’t be downloadable on iOS anymore. But if you use also DEVONthink To Go and need these contents then try disabling the sync to your Synology. In that case only DEVONthink will update the ~/CloudStation folder on both computers.

I think this will do it.

As an aside, I had forgotten the upload indexed items option was under Show Info for a location.

I really don’t use DTTG, and think I can do without it.

Did this solve the problem for you? I’m having the same issue.

Yes, this fixed it for me.
Good luck.

Yes, this is what I was trying to describe when I posted my issue with duplicates a while back, but was doing such a terrible job at.

This helps me lots, but I don’t have a synology folder so I wonder what could be the culprit. The constant reappearance of.the duplicates has gotten crazy obnoxious though.

@cgrunenberg I am still sporadically getting duplicated indexed items though not nearly as bad as it once was. I feel like I have been so all over the place with trying to fix it that I either made it worse or don’t have any idea of how to implement a systematic approach to finiding out what the culprit could be. I am noticing that in my sync there are multiple copies of certain databases which would require that one overwrites the other, which I’m reluctant to do for fear of losing data potentially. Do you have any suggestions for how I can begin to untie this knot I’ve dug myself because the prospect of having to delete certain duplicate files one more time for some reason I don’t comprehend makes me want to vomit in my mouth a little. Please help oh wise one.

Is the option to duplicate documents (see Preferences > Sync) in case of conflicts enabled on one of your computers/devices? In addition, what’s the path of these indexed items?

Is your Documents folder synchronized via iCloud Drive? And did you recently add or modify this file?