Hi, since a few days I’m having this problem on my iMac and on my MacBook Air 13". The DEVONthink window is not displayed correctly, a little bit on the top is not visible. It’s easier to explain if you look a the screenshot. The problem is I can’t click on certain areas anymore like toggle in the information panel, am not able to sort by name or whatever etc.

Anyone else having this problem? It doesn’t change if I switch to full screen mode etc. I am using DT 3 Pro 3.8.

Just a quick thought…does the problem persist if you quit and relaunch DEVONthink (alternatively, if you restart your Mac)?

If those don’t produce a result, what version of macOS are you using?

A screenshot before quitting and after launching the app again would be really useful. In addition, which version of macOS do you use? Thanks!

Hey, I posted a screenshot in the original post. Looked the same before quitting and after launching. The workaround by @toao actually did the trick glad enough.

I am on the newest macOS version 12.0.1 on both iMac and Macbook Air. On my Macbook Pro 11.6.1 is still installed and I am not having the issue here.

as/if this can be re-produced - any chance of it being fixed in an upcoming release?

Sure, bugs which can be reproduced get of course fixed. But so far no “luck”. Therefore if you’re able to easily cause this by performing steps, additional information would of course be welcome.

ok, this is how I consistently (re-)produce the issue:

at this point DT launches into full screen mode and the top lines are hidden as described by the OP. this can be “fixed” by:

while I would be surprised if that had influence on the issue: when starting I need to manually enter the password of one of my encrypted databases as I do not store them in keychain.

hope that helps with re-producing the issue…

ok, this is how I consistently (re-)produce the issue:

Unfortunately these steps are not sufficient over here to reproduce it. A screenshot of your sidebar preferences (see Preferences > General > Interface) might be useful. In addition, which macOS version do you use?

…anyway, I am on mac os 12.2.1 and please find my preferences attached: 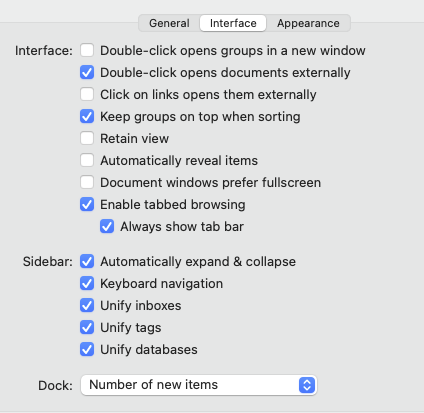 Still no success unfortunately. A screenshot of the app before quitting and after relaunching might be useful.

very odd, for the first time I could not re-produce the issue, despite having done so, before replying to your note above with 3.8.2. “vorführeffekt” I presume…will get back when it happens next and / or I can find out when it triggers and when it does not…

Typical example for this:

In computer programming jargon, a heisenbug is a software bug that seems to disappear or alter its behavior when one attempts to study it. The term is a pun on the name of Werner Heisenberg, the physicist who first asserted the observer effect of quantum mechanics, which states that the act of observing a system inevitably alters its state. In electronics the traditional term is probe effect, where attaching a test probe to a device changes its behavior. Similar terms, such as bohrbug, mandelbu...

Did you have windows in fullscreen when you updated to 3.8.2, which quit and relaunched DEVONthink?

@cgrunenberg: I had a window open in fullscreen (several actually) and this is what I saw immediately after updating DEVONthink…

yes, this is exactly the behaviour I am talking about…and, yes, I did have the DT window open in full screen when updating. shared full screen (with another app) to be precise…and I am seeing this behaviour frequently (unless I want to show it …

Do you have multiple windows in fullscreen or just the one? 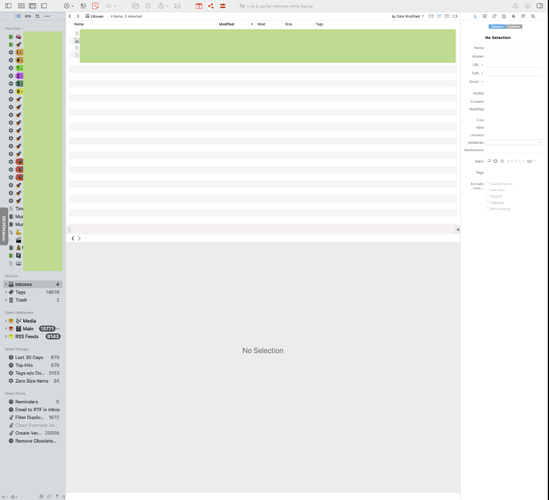 @cgrunenberg: I had a window open in fullscreen (several actually) and this is what I saw immediately after updating DEVONthink…

Are you able to reproduce this? Which macOS version?