Differences between indexing vs. importing files

I’m curious about major differences between importing files from Finder folders into DT vs. indexing them.
I know that I benefit from importing files, such as annotated, highlighted pdfs, to which I can then apply ‘Summarize Highlights’ for a new file version just showing these annotations / highlights, which is very convenient

I can access and work with both imported and indexed files in ‘Workspaces’.

Other than that, I don’t know of another benefit from importing, vs indexing.

It would seem convenient to NOT import files if I don’t see a reason, and just index them … Am I missing something?

Did you already see the relevant secton starting on page 52 of the user guide (also available through the in-app Help)? (I was unsure, from your question.) 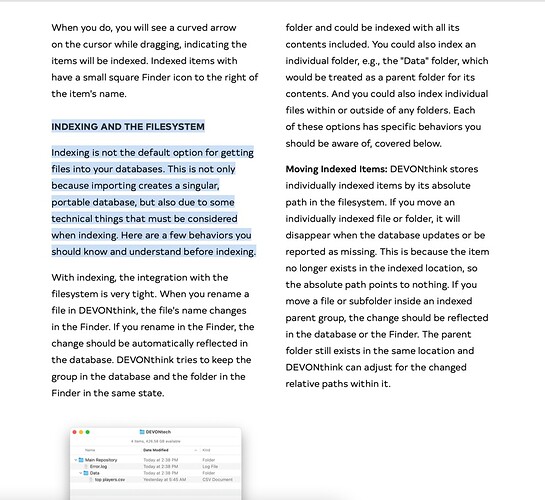 As far as I am concerned, indexing has the disadvantage that DT is not always aware of changes and then needs to be manually triggered to become aware of file movements. I also find it more comfortable to back up databases rather than individual files; my databases are encrypted, so I don’t need to worry about any data being backed up (to WORM or a cloud service) unencrypted.
As such, most of my files reside in DT. I Index some files which I regularly work on from different devices, and which reside on iCloud Drive.
DT does not use proprietary file formats for your files; in fact, it doesn’t change them at all when you import them. It offers an export function which will allow you to export all your files to a mirror image folder structure in Finder if you ever want to leave DT behind for good.
So to me importing makes sense; to me DT feels as if that was what it was designed to do. It’s good at indexing, but (inherently) can’t keep up with some changes which happen when it is closed, for example.

I appreciate your distinctions, Blanc. That makes sense to me; I’m a little new to indexing files and I wanted a meta-perspective on this characteristic. I think I’ll stick with importing, too. - M

Thank you Stephen. I hadn’t seen that U-guide; I refer to the Kissell book on DT3 and it didn’t have the detailed description on indexing distinctions that the guide has. I think I’ll stick with mainly-importing. - M

I think I’ll stick with mainly-importing

That is certainly what I do.

I think of indexing as a way to use DT in a mode where both DT and the Finder are (continually) aware of what each does to any given indexed file within the tree Folder structure. Delete a file in DT; it will be deleted in the Finder. Move it to a different location in the Folder structures at the Finder level, it moves to that revised location in DT.

I think of importing as a way to use DT in a mode where DT initially makes an exact copy of what it is handed from the Finder and then goes to its own room to work on what it has.

I tend to Index… I “need” to have my files available in the finder for Google Drive to access them. I wonder if I am missing any features that work better (or only) on imported files? But so far its been working well for me.

I wonder if I am missing any features

No; the brilliant thing about DT is it’s flexibility - you can use it as best suits your needs. If indexing is working for you, you’re good!

One thing to bear in mind about indexing - and I rely on it a lot, it’s a great way to pull arbitrary files and directories into DDTG where you can access them in ways otherwise impossible - is that tags are stored as file metadata. Elsewhere in this forum I discuss making a regrettable (but now recovered) mistake, where I turned off tagging on a bunch of files (I’m a heavy tag user) - the downside of using tags on indexed files is that file requesters in macOS take an age to appear, as it puts together a list of tens of thousands of tags I don’t use in the finder. Just a warning for anyone who decides to take the same crazy path I did - however, most of my workflow is built around indexed directories.

Delete a file in DT; it will be deleted in the Finder. Move it to a different location in the Folder structures at the Finder level, it moves to that revised location in DT.

This has not been my experience, DT and finder are not “equal” partners in this way. Yes, deleting a file in Finder will delete it in DT (once it updates, which is usually automatic in my experience when it detects a change). But deleting the file in DT does NOT delete it in Finder, it just deletes the link to that file (which I think is the appropriate behavior actually). And famously, moving the file in Finder breaks the link to it in DT.

I use both indexing and importing a lot. The main disadvantage of indexing is that if you move or rename a file in Finder, DT loses track of it. But within those limitations it can be a great way to go if you want to make the file available to other apps without having to go thru DT first. If I edit the file with some other app, it is automatically updated in DT. What’s more, the link between file and DT persists across devices: I have access to the indexed file on both my laptop and iPad, just like files that have been imported, but within whatever group/structure I have in DT rather than the Finder.

But deleting the file in DT does NOT delete it in Finder, it just deletes the link to that file

I am not sure if I am using different settings than you, but my deletions, edits, movement between folders (as long as that folder is also in DT) etc… replicate both ways between finder and DT. Otherwise I wouldn’t be using it

From the User Manual:

DEVONthink stores individually indexed items by its absolute path in the filesystem. If you move an individually indexed file or folder, it will disappear when the database updates or be reported as missing. This is because the item no longer exists in the indexed location, so the absolute path points to nothing. If you move a file or subfolder inside an indexed parent group, the change should be reflected in the database or the Finder. The parent folder still exists in the same location and DEVONthink can adjust for the changed relative paths within it.

Regarding deletion, that may indeed be some setting that I forgot about and can no longer find. But I’m glad it acts the way it does on my system.

I’m with ‘Clearscreen’ on this … moving (indexed) files and folders that contain these files in Finder makes them unavailable in DT. It’s a pain to then have to re-set these.
Please remember if you are using special settings and let us know!

As I just wrote in another reply: in my experience, moving (indexed) files and folders that contain these files in Finder makes them unavailable in DT. It’s a pain to then have to re-set these.
Please remember if you are using special settings and let us know!
Thanks

I do not think I have any special settings on - but both folders do need to be already indexed in DT… AND, I often have to use the “Update Indexed Items” command … But they do travel between folders successfully as far as I can tell. @BLUEFROG can you confirm the expected behavior? Thanks