Note the excess space after the >> and the shortened search field.

beep is a toolbar script but this is only when using the standard Big Sur toolbar layout.
I am not seeing this in Big Sur on an Intel Mac though.

@gregor: Quit DEVONthink and enter this in Terminal…

Do you see the script(s) after relaunching DEVONthink?

Yes, see them after entering this in terminal.

Thanks for the follow-up!

I’ve just had this happen tonight. I happened to look at the toolbar, and my custom buttons (scripted) were gone. Restarted DT3 and back they came. This is on an Intel iMac running macOS 11.1.

Still the scrips are sometimes there and other times not. If not, the scripts are also not in the scripts folder, so I can’t even just start them via the script menu.

Just pointing this out.

???
Scripts shouldn’t be disappearing from the Scripts directory. If they are, you have something else going on in the Finder.

As far as I remember, when I yesterday clicked on the scripts icon in the menu, it displayed just the usual folders there and none of my own scripts. When I do this today, I see these folders and my own scripts at the bottom. Yesterday they were not there, today they are. Today, when I started DT, the scripts were also in the tool bar.

Next time I happen to experience them not in the tool bar, I’ll check again if my own scripts are in the scripts folder.

How DEVONthink is launched shouldn’t have any effect

Yes, please check the directory if the condition recurs.

So here we go: today, calling up DT via browser extension, the scripts were missing from the toolbar. Looked into the scripts menu and it looks like this: 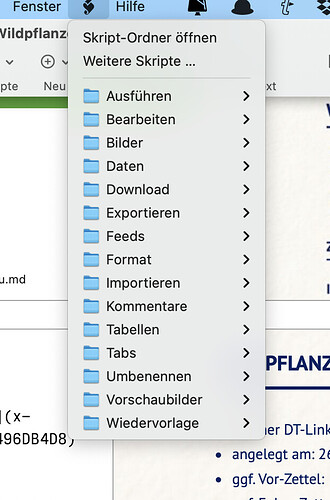 Closing DT, restarting it via click on Dock, the scripts were still missing. But a look into the scripts menu looked like this:

and a click on opening script folder got me to /Users/gregor/Library/Application Scripts/com.devon-technologies.think3/Menu

And that’s the problem right there. How to circumnavigate this? It is, I think, your browser extension that routes me to different DT environments.

That’s not the official Scripts folder of DEVONthink 3 and not created by DEVONthink. Is there still an edition of DEVONthink 2 installed on your computer?

Not that I’m aware of.
And I only bought DT
once it got to version 3.

You could Command-click on DEVONthink in the Dock to reveal it in the Finder, both after launching it via the browser extension and on your own. Is it the same app?

Also, it’s the same icon, sitting on the same spot in the Dock (where DT sits permanently).

Weird. Please choose Help > Report Bug while pressing the Alt modifier key to start a support ticket, maybe there’s something useful in the hints. Is one of these two scripts folders an alias or symbolic link?

As for the script folders being alias or symbolic links, can I detect that because the folder has this icon with the arrow? 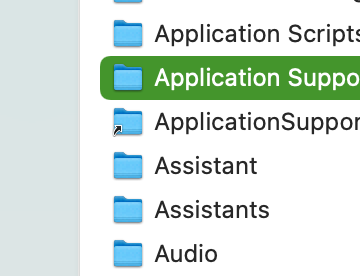 Because then: no. Both have no icons with any arrows.

You could also check the type of the Scripts folders via the Info panel of the Finder.

My toolbar scripts are usually in a folder named “Toolbar” inside:

Here’s the very weird part: with the first window still open, by just opening that second folder, I saw before my eyes, the contents of the “Toolbar” folder from the first location, move to the second!

The “Toolbar” folder in the first location remained, but became empty.

Looking in the actual toolbar and hovering the mouse over each toolbar item showed its location in the new place.

After quitting DT3 and re-launching it, the toolbar script-items remain in the new place.

It’s like the OS doesn’t like those items to be in the old (but I’m assuming correct) place, but why it should actually move them on opening the new location window, I have no idea!

On my other Mac, the items are in the old location. I could try the experiment of opening the new location and see if they move, as they did on my iMac, but maybe I shouldn’t.

Update: on my other Mac, I launched DT3, hovered the mouse over the toolbar items and the path that appears shows them as being in the “new” ~/Library/Application Scripts/ location.

But, on this other Mac, the scripts are still visible in the old ~/Library/Application Support location.

I haven’t opened the “new” location on that other Mac yet, so I don’t know if they’ve been copied - I presume they must have been; they certainly haven’t been moved, since I still see them at the “old” location. I’m wondering if, on the other Mac, I merely open the folder at the “new” location, they will get moved again.

The correct location for Toolbar scripts in DEVONthink 3 is ~/Library/Application Scripts/com.devon-technologies.think3/Toolbar.

Oh well, they’re in the right place then. But how odd that I should see the Finder “clean them up” from their ‘wrong’ location to the ‘correct’ one.