DTTG does not identify OmniOutliner (and other) files

I am starting to use OmniOutliner files by placing them in DevonThink databases, this allows me to view them without leaving DT and I can edit them with OmniOutliner without problems.

The problem arises when I want to edit them with the iPad from DTTG: it is impossible to know from DTTG that the OmniOutliner files are OmniOutliner files, since DTTG is unable to identify them as such, this makes it difficult to use the “open with” menu of iPadOS, since you have to identify each file one by one. If DTTG would identify the file type, as it does with txt, md, pdf, etc, it would be quick and easy to edit.

I request that a next revision can include this capability that will make it easier for users to edit different files with their iPadOS or iOS applications.

DEVONthink To Go shows unknown document types in the Documents section when sorting by Kind.
Also, the kind is reported based on the file extension.

What version of DEVONthink To Go are you running?

Try this…
On DEVONthink To Go’s Home screen, go into the ? > Help > Appendix > Utility URL Commands and tap the Execute link under reindex. Then let DEVONthink To Go do its thing.

I’d also suggest a quit and relaunch of DEVONthink To Go after it finishes the reindexing. Then check the document in question.

This indeed results in a document of an ‘unknown’ filetype

Attention! the reindexing has not solved anything. In fact it has made it worse: before the reindexing I could download the file to the iPad, now I can’t, as it doesn’t offer me the possibility.

upss!.. but I can share it through the system menu… I don’t understand anything anymore.

(Always with the “unknow” as identifier. I just checked everything.)

How is it identified?

I have proceeded as you now indicate and the files still appear as “unknow”.

…could it be a problem with DTTG version 3.1?

How does the name appear in the item list of DEVONthink To Go?

Please post a screen capture of the file in the item list in DEVONthink To Go, similar to the one I posted. Thanks…

Note: if I activate the display of extensions in DT, the extension does not appear in DTTG

Thanks for the screencap. We’ll have to look at this.

I will stand by for more news.

I need to you try a new test for me, please…

You should be seeing each file, one with an extension in the name, one without, like so… 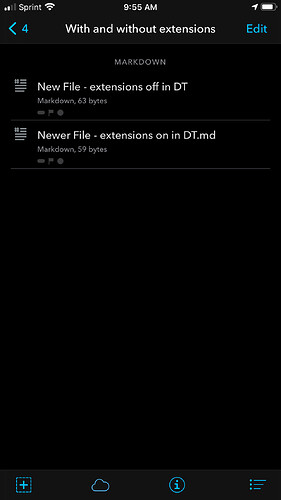 Here is the result: 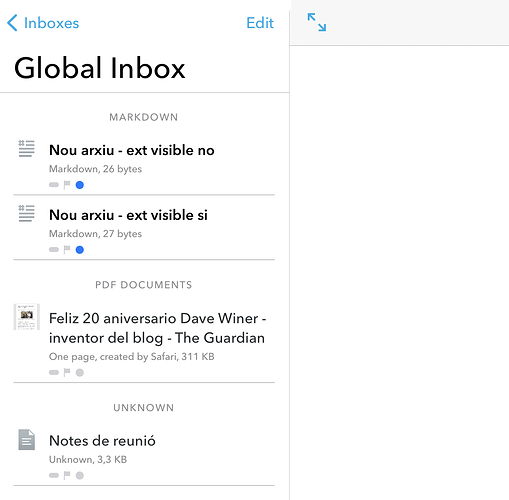