Error with tags on DTTG - tags are duplicated and some showing as groups?

Morning, something has gone weird with my tags on DTTG. I will do a rubbish job explaining it so here are three screen grabs.

This is my tag list for my main database on DTP:

This list is correct and what I expect to see on DTTG.

Instead, this is what my tag list for the same database looks like on DTTG on iPad:

Bizarrely, DTTG on the iPhone is not presenting duplicates in the same way as the iPad, but is displaying some as groups (I think that’s what the icon means?) and some as tags. 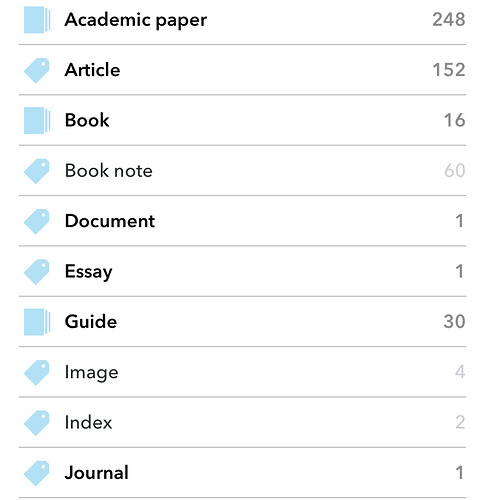 I have changed no settings on either devices, and did not have this issue previously. However you should be aware that I don’t go in the tag list on DTTG that frequently so it’s possible this isn’t a “new” issue related to the latest release.

Edited to add: if I click into these duplicate tags, they aren’t showing the same files, so they’re not “true” duplicates.

All devices running current OS, and DT up to date too. The iOS devices are on DTTG 3.6.1.

Hmm, did these additional groups/tags appear after the upgrade or could this have been happened already with version 3.5.7 (where there was a tagging issue)?

I don’t know, sorry. I don’t go in tags on my iOS devices frequently enough to have spotted the error. It was in 3.6.0 though because I upgraded to 3.6.1 after I noticed the issue.

Hi, I’ve tried @DTLow’s suggestion of verify and repair and it hasn’t fixed the problem. In addition, I can’t see that any tags are appearing in the location section in my files (at least for the files I’ve checked) so this would appear to be a separate problem.

Yes, all devices up to date.

I also am seeing tags duplicated (triplicated, actually) in DTTG in one database. Running 3.6.1 on two devices and seeing the triplicates in both places, whereas it’s a single tag in the same database in DT3.8.7.

Have you done a verify & repair on the database(s)?

Oops. That resolved the proliferating tags. Thanks.

@eboehnisch I’m afraid our pesky bug is back - I’m still running the beta test of DTTG on iPad and I noticed this morning that I’ve got duplicated tags again. I’m afraid I haven’t been in the tag list since we fixed it before so I don’t know when new duplicates appeared. My iPhone (also running the beta) doesn’t have any duplicate tags, but I don’t think I’ve used DTTG on there for a week or two so it might just be that it’s not had a chance to create any yet. (It is synced but the duplicate tags only appear on iPad.)

Could it be that the duplicate tags were added because a document was tagged or came in through sync with the tag and DEVONthink To Go simply didn’t notice that a tag of the same name already existed?

Not that I can see. The documents that are in the duplicated tag are old ones that I’ve not interacted with for months.

Did a Verify & Repair make a difference?

It has fixed it, forgot to test that! Thank you. I am actually wondering whether it’s also related to CloudKit’s issues this week that we’ve discussed elsewhere. Maybe a sync didn’t complete and DTTG got confused.

Glad to hear it!
Keep an eye on it, just in case.