The Evernote import process retains the link back to the note in Evernote (evernote://…). This was in response to the majority of Users’ desires to run Evernote in conjunction with DEVONthink. However, more recently, people are converting completely over to DEVONthink.

Attached is a script that will convert Evernote URLs into their source URLs (if the note has one). It relies on you making a selection to convert, allowing you to switch completely or retain some links back, if desired.

Suggestion: Do not delete your notes within Evernote before running this script in DEVONthink. This script does call backs to the Evernote app to locate original URL.

I’m so grateful that you did this!

However, it doesn’t seem to be working quite correctly.

for some reason, this script changes it to this:

i.e. it’s appending the note text to the URL.

Do you know why? The weird thing is that when I do an “Info” on the note in DTP, it looks fine, but URL as displayed just above the note body in DTP consists of the much longer one above.

I can’t reproduce this here. It’s pulling the URL from Evernote’s data, then just setting the file on the DEVONthink record to whatever Evernote reported.

I just tried it with the URL you provided, captured it to Evernote, imported in DEVONthink, and watched the responses. All is good here.

I can give you the original Evernote note. Here it is:

No need to add it to Evernote. Here’s what Evernote says what that file’s URL is…

That’s fascinating; thanks! But when, then, when I click on “Info,” does DTP show what looks like a normal URL? 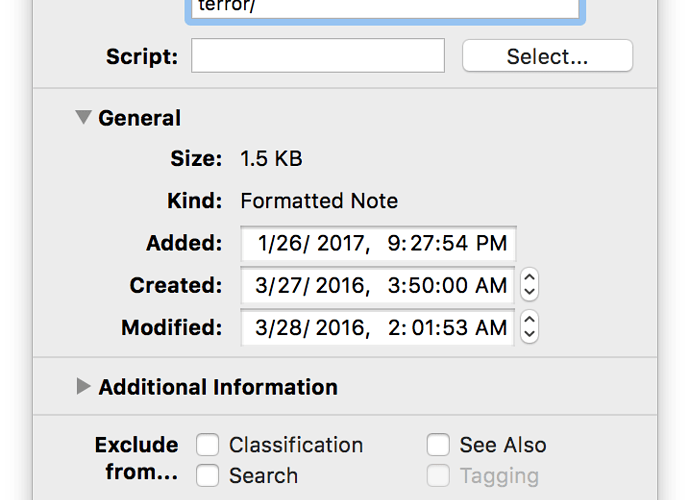 But if I click on the “@” symbol, then of course that incorrect URL is used.

Put your cursor in that URL field, then keep pressing the down arrow

Now can you click on the “@” symbol in the “Info” box and get the link to open successfully in Safari? I can’t – but if I copy the URL and paste it into Safari’s address bar and hit return, it works.

This is a proposal, not a standard.

Right, but what is DT doing when sending it to Safari?

Nothing. I just clicked the @ symbol in the Info pane (after setting Safari to be the default browser) and it opened the website as expected.